St. Lazaria as seen from Low Island Today we made a second try for Low Island. We needed to be back in town by 11:30am, so we arranged to meet at the harbor at 7am. I was a few minutes delayed by a singing bird that I didn’t recognize. The ride out was largely uneventful. … Read more

Today was the annual WhaleFest fundraiser food web cruise. I’m not sure how long it’s been an annual fundraiser, but I’ve been invited to talk about birds for the past several years. I always enjoy participating on these trips and appreciate the opportunity. Although it was a little slow for birds this year, the weather … Read more

Since today is the last day of January, I thought I would look through the observations I recorded during the month. It’s been a somewhat slow month, weather and work kept me from getting out too much. Mostly I’ve been in the central downtown area with a couple of trips out the road (where I … Read more

Over the past couple of decades or more, sea otters numbers have increased dramatically in Sitka Sound. When I was growing up, I don’t remember seeing any sea otters until probably the early or mid-90s, and that was up close to Salisbury Sound. These days, it’s not hard to find rafts of 100 or more … Read more 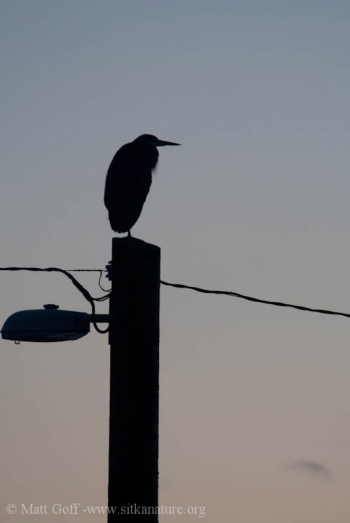 Somehow most of a month has slipped by with very limited posting, despite my intentions to keep up with nearly daily posts. I’ve started to fill in some of the missing days with photojournal entries (see side bar for recent updates there), though in most cases it’s been long enough that I have forgotten what … Read more