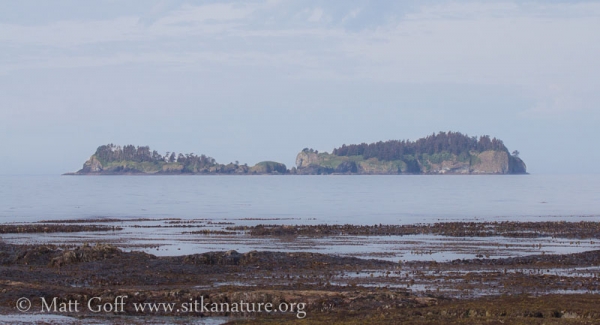 Today we made a second try for Low Island. We needed to be back in town by 11:30am, so we arranged to meet at the harbor at 7am. I was a few minutes delayed by a singing bird that I didn’t recognize.

The ride out was largely uneventful. We did see a whale blowing in the distance, and there was the usual assortment of murres, otters, and the occasional Rhinoceros Auklet. One change from a couple of weeks ago was the ocean conditions. It was basically flat calm all the way out to Low Island. Skies were pretty much clear, though a pollen (presumably) haze hung in the air.

Out on Low Island there were quite a number of seals. As the saw they boat coming in closer, they opted to head for the water. We had an audience watching the anchor drop and the 4 of us head towards show in an inflatable. I think in the end, the seals mostly moved around the island, as there were a couple of other locations on the other side that had a large number of seals hauled out, and at the one on the south side, I saw seals arriving and hauling themselves up on to the exposed rocks.

Shorebird-wise, things were definitely more active than it has been recently around town, but birds were not as abundant as I have seen in past years. Still, it was a nice mix, including at over 20 (and perhaps over 30) Red Knots, Sanderling, three Wandering Tattlers, at least four pair of nesting Black Oystercatchers, Black-belled Plovers, Western and Least Sandpipers, Dunlin, Short-billed Dowitchers, Semipalmated Plovers, and perhaps a Semipalmated Sandpiper (though I did not get a good enough look to be sure).

Walking around the island with calm air and sunny skies, I ended up feeling quite warm. When we returned home, the sun was still shining, but a few clouds were starting to form near the mountain peaks. As the day went on, those clouds settled over the mountain peaks and then by this evening had developed into a more complete layer of marine stratus that obscured the blue sky and sun.

The kids and I did make use of the nice weather and continued work on the yard – both cleaning things up and getting things planted, including the remainder of the first order of strawberries as well as potatoes. 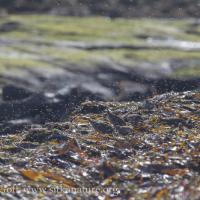 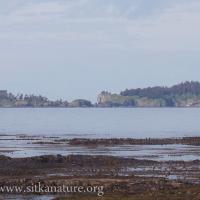 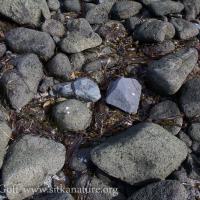