Since today is the last day of January, I thought I would look through the observations I recorded during the month. 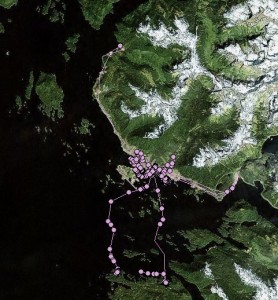 It’s been a somewhat slow month, weather and work kept me from getting out too much. Mostly I’ve been in the central downtown area with a couple of trips out the road (where I wasn’t doing much in the way of observation) and one short boat trip.

All together I recorded 60 species – all but 4 of them birds. Non-birds included a Snow Sedge (caddisfly), Sea Otters, a Steller Sea lion, and shrew tracks (the fly and shrew tracks were photographed, but not recorded in CyberTracker).

Of the 58 species of birds, thirteen were only recorded on one occasion. The species I noted most often were Common Merganser (37 times), Common Raven (35 times), Song Sparrow (29), Northwestern Crow (27 times), Dark-eyed Junco (24 times) and Rock Pigeon (21 times). I was actually a little surprised about the mergansers – all the other species are frequently found in my neighborhood. I guess the spacing of the mergansers is such that I usually end up marking them down several times most times I am observing somewhere along the shoreline.

The most unusual species for the month were at least two different Anna’s Hummingbirds recorded on four occasions (none since the cold snap mid-Month), a single record of a Lincoln’s Sparrow (very unusual for one to be over wintering here, as far as I know), and a lone Common Redpoll that’s been hanging in with a flock of Pine Siskins (Redpolls can be common in some winters, but most winters they are basically absent). The Western Screech-Owl is notable since it was a sight rather than sound observation.

In terms of total numbers (which, despite the apparent precision should only be taken as rough approximations), I recorded 569 Northwestern Crows, far an away the most numerous species. On two occasions I estimated at least 100 birds in a flock, and several other reports have counts between 20 and 50. Other species with relatively high totals included Mallard (260), Dark-eyed Junco (253), Common Merganser (244), White-winged Scoter (235 – almost all of which were seen in two sizable flocks on the boat trip), Long-tailed Duck (219), Common Raven (170), Pine Siskin (150), Rock Pigeon (148), and European Starling (121 – a significant undercount, since I often neglect to carefully note the starlings around this neighborhood). All other species were below 100 total individuals recorded.

I’m working on the 1000 species project as well as the 1000×1 (Song Sparrow), species project – though I have not yet managed to get everything set up how I would like in terms of how I will keep track, I am getting closer. As the year goes on I’ll definitely be dipping into other groups more heavily – especially once spring arrives. In terms of observations for each project, I’m lagging behind, but I think it will be relatively easy to catch up later in the year. Of course, I should probably try to be getting close to done by the time fall arrives, as late fall and early winter aren’t likely to be conducive to picking up additional species, in many respects.

1 thought on “Month in Review”