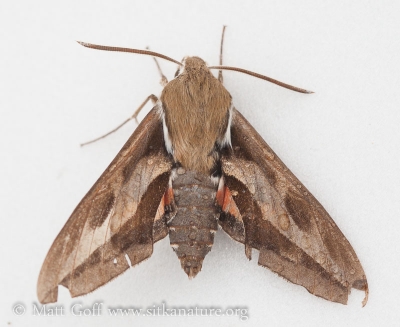 A couple of years ago Rowan found a caterpillar which we later were able to determine was a hawk-moth. After learning a bit about them, she has been interested in finding one ever since. Last Sunday I happened to notice one resting on the grass at Keet Gooshi Heen softball fields while I was tossing a frisbee with Connor.

It seemed very lethargic, and given the somewhat worn nature of its wings, I thought perhaps it was nearing the end of its life. We brought it home and put it in an enclosure so Rowan could see it the next day. I noticed later in the evening that it was flying around, so when the kids arrived Monday morning, I had them go gather it some fireweed. It was interesting to watch it get nectar from the flowers. Below I’ve included a short (and mediocre quality) video clip I recorded and uploaded to youtube.

It appears that Bedstraw Hawk-Moth is a species of somewhat northern latitudes, but distributed around the world. In this area, it seems likely that it utilizes Cleavers (Galium aparine), Fireweed (Chamerion angustifolium), and various other Epilobium spp as larval food plants. I’ve heard of other people seeing hawk moths here before, and I may have seen one fly-by me one day by the fireweed patch at the end of Totem Park, but overall they seem to be uncommon.