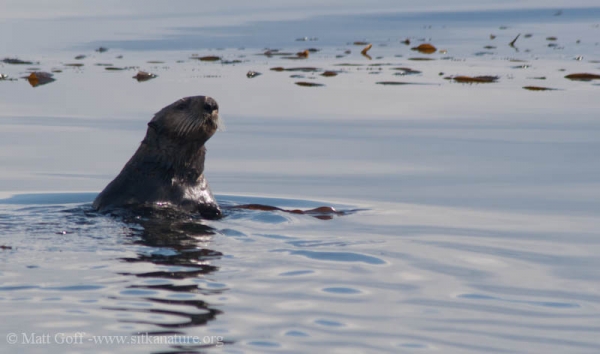 Over the past couple of decades or more, sea otters numbers have increased dramatically in Sitka Sound. When I was growing up, I don’t remember seeing any sea otters until probably the early or mid-90s, and that was up close to Salisbury Sound. These days, it’s not hard to find rafts of 100 or more individuals at a few locations not far from town, and singles or small groups are common in most locations with at least a moderate amount of exposure to the open ocean, including right off shore of Halibut Point Road from Sea Mart to Halibut Point. I’ve also seen them on occasion in the channel and just out from Crescent Harbor. (Though, now that I think about it, I don’t really recall seeing them in highly protected inside channels, though I imagine they move through such places at times.)

Sea otters are well known as keystone species – and as would be expected, the kelp patches have been increasing in size over the last several years. I did not actually pay enough attention to such things when I was growing up to clearly notice the difference, but I suspect some interesting work could be done (and perhaps has been) using aerial photos for comparison. (For those who aren’t familiar with the story – Sea otters are voracious predators of invertebrates, including species that graze on the kelp species that form kelp forests – when sea otters are gone, these grazers are able to keep the kelp mowed down quite effectively.)

Sea otters are of concern to some fisherman because they are voracious predators of species targeted for commercial and subsistence harvest – especially in dive fisheries. There has also been some news lately about efforts to change some of the policies regarding the allowable sale of sea otter skins by Natives (who are allowed to hunt them, but currently are only allowed to sell finished products made from the skins, but not the skins themselves). Given the large and still increasing population, and its impacts on some invertebrate fisheries, as well as the potential economic benefits to sea otter hunters, it’s my understanding that some feel the time is right to reduce some of the restrictions on sale of sea otter products to encourage a higher harvest and perhaps help keep the population from continuing to grow so fast. As with herring this quickly gets into politics and economics – things I’m disinclined to get too involved in.

A question that has come to my mind recently is whether or not the sea otters might have something to do with the increasing abundance of herring. Kelp forests are said to be important for many species, including rearing habitat for the juvenile stages of some fish. I’m uncertain whether herring utilize kelp forests at any stage other than spawning, or to what extent spawning that occurs in/around kelp forests might be influenced relative to a situation where the kelp was not present in that location. I made a cursory look for information about herring life cycle, but wasn’t able to find anything too detailed to convince me one way or another. If anyone has information or ideas about on what impact, if any, returning kelp forests have on herring recruitment and survival, I would definitely be interested in hearing about it. 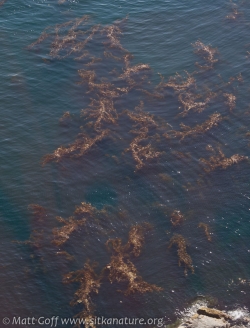