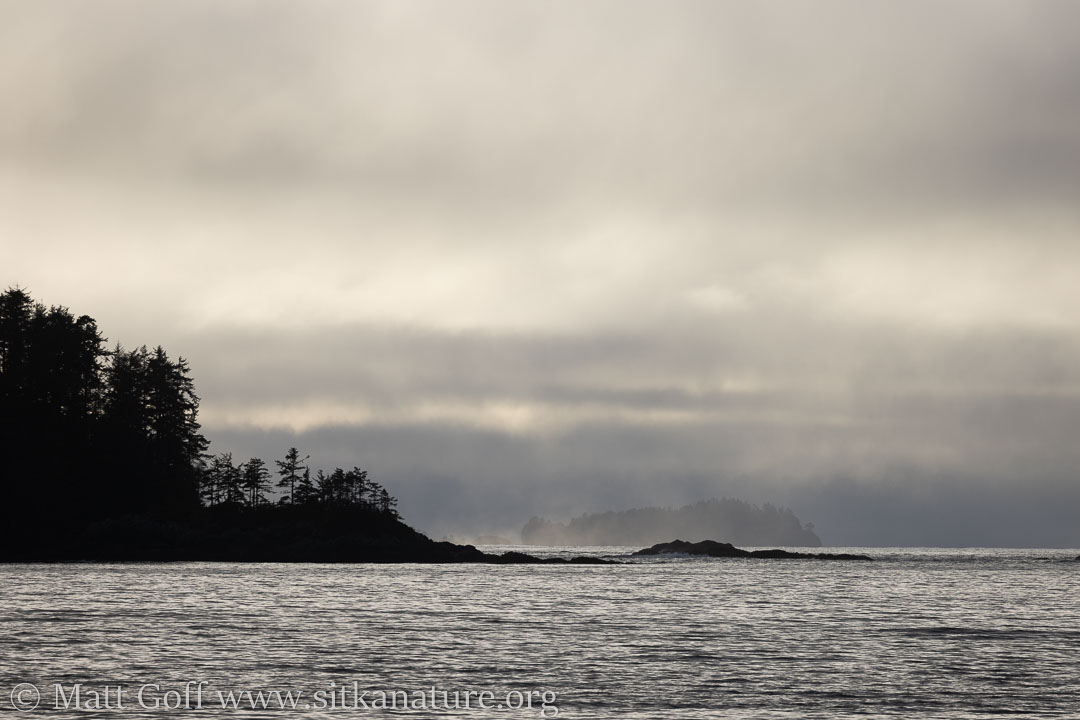 One of the mosses in Polytrichaceae, as yet unidentified

Rain overnight with fog breaking up this morning to sunny skies for the first part of the afternoon. A marine reformed a bit higher than this morning’s fog, but no less effective at blocking the sun.

Last night’s .3 inches or so was enough to take February’s total over 15 inches and into second place all time. After a dry midweek, the weekend is forecast to have more rain. We’ll need a bit less than half an inch by end of the day on Monday to pass 1964’s 15.56 inches. That year was a leap year, and had .28 inches on the 29th. On the other hand, it also had only three days all month with less than .1 inches reported. This month has already seen 7 days with less than .1 inches.

A pair of ravens were making interesting calls together on the neighbor’s roof this morning. I could see them through the blinds in my room. I wonder if it was something about courtship. The calls each one made seemed similar (to my ears) but different from each other. I could see one was also making some sort of display where it spread its tail feathers. This continued for a few minutes before they departed.


I went for a drive this afternoon. I drove further than usual, as my car had accumulated a lot of internal moisture (as things do around here). With the afternoon sunny, dry, and on the warm side, it seemed like a good opportunity to air it out, and hopefully reduce the amount of condensation (and subsequent possibility of mold).

Silver Bay was calm, with nice views of the snow covered mountains. I spotted a handful of murres out in the bay.

Although no snow accumulated in the central part of town, a couple of inches must have fallen overnight at Herring Cove


I was somewhat surprised to run into snow on the road to Silver Bay, with more yet out towards Herring Cove. Snow level on the mountains didn’t seem especially low, but it was clear there had been accumulation out that way.

Given the amount of snow on the Silver Bay end, I thought there might also be some at Starrigavan. There was none apparent. I’m curious if it was warmer and all fell as rain, or if it just didn’t have as much precipitation during the rain last night.

Bright red sporophytes are developing from this as yet unidentified moss (in the Polytrichaceae family, most likely)


At Starrigavan near the end of the road, I noticed the patchwork of bryophytes on the bank rising from the roadside parking area. I photographed and collect a few.

I may need to cut back on my collecting a bit. It’s relatively fast/easy to pick things up in the field, even if I get photos at the time. What isn’t so fast is pulling apart the collections and getting photos of various views using a couple different microscopes.

Scapania strand that came along with a fungus I collected


This evening in a couple hours I managed to work through a couple fungi I collected over the past few days, and one liverwort strand I noticed which had come along with a fungus collection.

We had a good turnout at ultimate this evening, enough to play seven on seven. Temperatures were cool, but with the marine layer overhead, no frost formed.