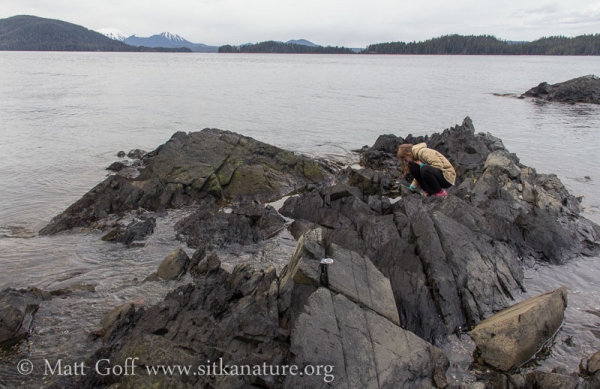 Late this morning, Connor, Rowan and I headed out to Starrigavan to see what might be out there. We managed to time it just about right at high tide, so it wasn’t optimal for seeing things. There were still quite a few ducks out in the bay, and I was surprised to hear a Long-tailed Duck calling. It took a little while, but I did finally spot it in the mix of goldeneyes and scaups.

After no luck finding glacial striations at Starrigavan yesterday, I thought it would be worth trying a little closer to town. There’s a very small pullout at Harbor Point where I’ve seen people parked before. I had never stopped and looked around, but it was my impression that people went down to the shoreline from there. There was a fair amount of junk below the turnout. Mostly it seemed overgrown by the salmonberries, and some appeared pretty old. We walked along the shore to the bedrock outcrops that don’t stick up much above the highest tides. Fortunately there was a better trail back up to the road from by the outcrops.

Most of the rock was pretty rough, especially on the Starrigavan side of the outcrop, but there were a couple of places that looked promising. I was unable to see any clear striations, but I could feel some. Perhaps if I had brought paper, I could have done a rubbing, and that would have helped. The azimuth on them was about 200 degrees (so a bit west of south). Presumably these were due to the glacier coming out of what is now Katlian Bay. 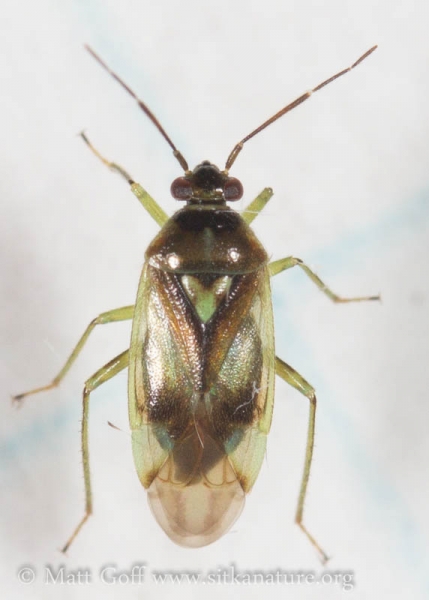 This Orthops scutellatus was on the car window when we got back from the shore.