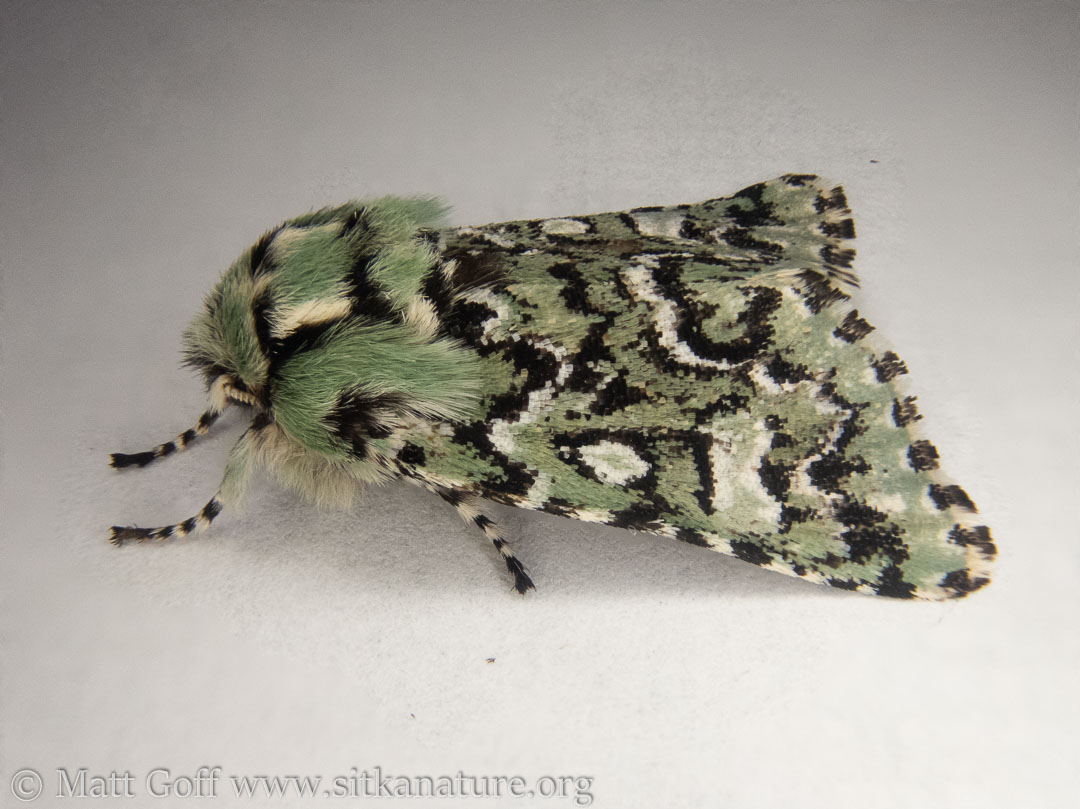 Overcast and rain this morning. Becoming mostly to partly cloudy with scattered showers as the day progressed.

Rain totaled about a third of an inch at the airport, but none fell there after 1pm.

Feralia deceptiva found by J. Cedarleaf. This s a first record for Sitka, and only the third for Alaska.


I made a brief trip to the raptor center at noon to check out an unusual moth which JC had found and posted on iNaturalist.

It’s only the third record for the genus in Alaska. The first was a photo in 2011, the second came in on iNaturalist within the past couple of days. Both of the previous records were from south of here.


The striking green, black, and white moth is a Feralia, but I’m not sure which species yet [Update: F. deceptiva].

I made it out this afternoon for a longer trip. By this time, the morning rain had stopped for long enough the streets were dry (except for occasional puddles).

I went by the airport to watch for a few minutes in case a Northern Harrier might fly by.

My main intention for the outing was to take care of the Gavan Hill ibuttons.


I heard many Varied Thrushes singing and saw a few others as I walked along the cross trail section. Also a couple of Townsend’s Warblers and several Pacific Wrens singing.

Although I’ve been getting some running in playing ultimate frisbee once a week, I could certainly feel the hill.

Midnight's Goblet (Donadinia nigrella) is not unusual in the spring, but it is easy to overlook.


I hoped to find a midnight’s goblet (Donadinia nigrella). I think it’s a fairly common spring species, but it is easy to miss. I spotted a couple of them growing from the duff near the ibutton placement.

I checked liverworts on trailside rocks while walking down. I saw lots Pellia neesiana (which is abundant here), but still haven’t found any Calycularia a similar species which has been reported, but I have not yet found.

The sun was shining at times on my way down. I appreciated how the filtered light illuminated patches of the understory and forest floor. I had a brief look at a Pacific Wren in a patch of sunlight, but it moved on before I could get a picture.

I noticed that wren in part because it had been singing. I thought it was singing from a relatively high perch like many of them do. Some of its songs were abruptly cut off. I assumed that was because of my approach (they often seemed to cut off when I took a step between pauses). It may have been because of that. However, when I saw it, it was moving through fallen branches and understory shrubs. I had the impression that the short songs were just what it did while it was moving around. I don’t remember noticing this before.

I returned to the airport and walked old airport road.


I managed distant photos of an Orange-crowned Warbler I first noticed because of its song.

I sat with my back against rocks lining the old long-term parking area. They provided a bit of a break against the cool north wind.

I saw at least three planes take off or land while I was there, but no harriers (two were reported earlier in the day – also three American Coots from Whiting Harbor).

Before going home, I made a stop at Eagle Way Beach. I had seen a report of a large flock of Black Turnstones, and decided to see what might be with them.


I spent most of 40 minutes sitting and watching the shorebirds and a few American Pipits.

I needed to be home for a 6pm call and was considering how I might get up and leave without disturbing the birds too much. It got much easier when a dog on the beach started running my way and barked. The owners called over to me that it was friendly (as they almost always do, in my experience). It’s not the first time a dog has come up and made it more challenging me to take the pictures I’m trying to (sometimes it’s scaring off birds, other times it’s been running up and nearly trampling the flowers I’m focused on). Usually I don’t say anything in response, but this time I called back to say that the issue was it was chasing away the birds, which is why I was there. (I guess that might not be apparent to everyone, though the fact I was sitting in the middle of a gravel beach pointing a camera with a large lens towards the birds nearby, might be suggestive.)

Dogs just do what they do and it’s not really surprising to me at this point, but sometimes it would be nice if people who are responsible for the dogs kept them a little closer and didn’t seem to assume that “it’s a friendly dog” somehow means the dog isn’t be disruptive to others. In practice, sometimes it’s more of a problem for me when the dog is friendly.

After my evening call, I headed down to Totem Park to see if there might be any shorebirds still around on the rising tide.

I saw one lone Black Turnstone out on a disappearing gravel bar. Two Marbled Godwits were doing their best impression of resting female Mallards. I would have overlooked them had DK not mentioned they were there.