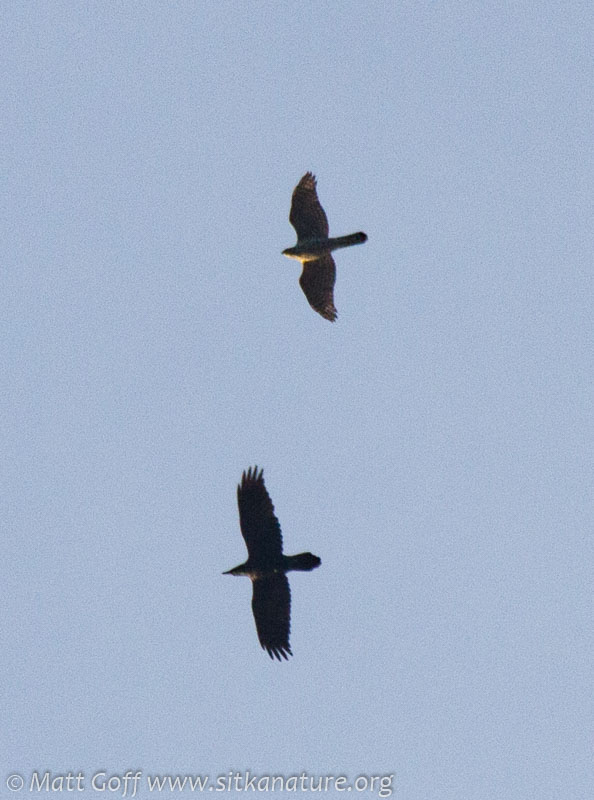 Mostly clear skies prevailed as the day dawned. I got up before the sun was high enough to be seen over the mountains to the southeast (not especially challenging as we’re headed into the last 5 weeks before winter solstice) and was a little surprised to find temperatures seemed to be above freezing.

I was out earlier than usual to wander the neighborhood in hopes of finding the Purple Finch that Rowan has now seen twice, and Connor saw briefly yesterday afternoon. Both of Rowan’s sightings were in the morning, so it seemed worthwhile to look around before I had a work call mid-morning.

While standing at the edge of the street just outside my yard, I noticed a different looking bird fly over. It was somewhat difficult to judge size, but one thing that did stand out was a distinct notch in the tail. I wasn’t sure at the time, but I now suspect that may have been the Purple Finch (spoiler:  if it was, I didn’t see it again during my time walking the neighborhood).

Although the air had seemed warmer than expected when I first stepped out, it was definitely still a chilly morning. I was thankful for insulating layers and calm conditions. I had seen the weather forecast was for high winds in some parts of northern Southeast, and as I looked at the streaked clouds above, I wondered if they were an indicator of fierce winds aloft.

After a short time, I was joined by a friend and together we walked the neighborhoods looking and listening for the elusive Purple Finch. We saw lots of juncos, and more White-crowned Sparrows than usual  for here, but no finch. Shortly before calling it good for the morning, we did see a raven harassing an accipiter that I think was a Northern Goshawk as they both flew directly overhead.

This afternoon I gave it another try. This time the streaked clouds were gone, though there wer some puffy clouds lower down. It was intermittently breeze at ground level, adding an additional chill (which I had thankfully anticipated and worn an extra layer). Given the lack of streaked/sculpted clouds up high, I am curious if that indicated a drop in wind, or if it had more to do with a change in the moisture and or temperature, and the clouds had simply dissipated.

The closest thing I saw to the targetted species was a flock of about 50 Pine Siskins flying over. Connor was out looking this time as well (he and his grandpa had come back from hunting relatively early after hearing someone blowing a deer call further up where they had intended to go), and he also did not find the finch. (I was amused when nearly walked right past me without seeing me while I sat in a rocking recliner that is alongside Park Street. I was in plain sight, but his attention was focused higher up.)

Speaking of not paying attention, I finally found the oak tree I’ve been wondering about for a couple of years. It turns out I’ve walked by it many times where it is a prominent tree in a yard on Bioka Street.

This year the crows seem to be visiting bird feeders more than I remember in prior years. Discouraging them is a work in progress (on the other hand, I’ve not seen so many pigeons in the neighborhood lately). 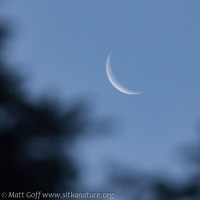 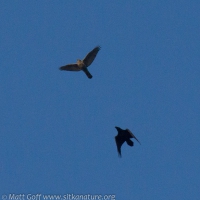 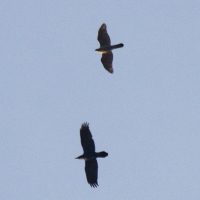