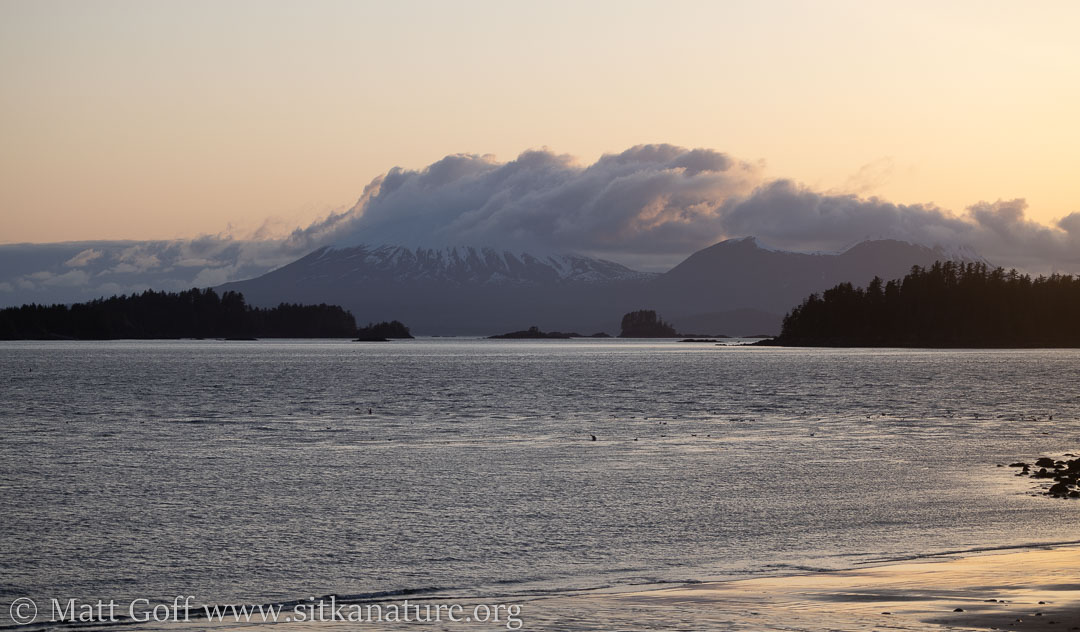 Sunny and cool pattern continued. Calm winds through this morning with a little breeze picking up in the afternoon into evening.

Mt. Edegecumbe on a spring day seen from O'Connell Bridge


Clouds appeared on the horizon, but mostly stayed out away from town. Some moved in from the north, but broke up.

Yesterday’s low of 29F tying a record for the date (previously reached in 1967). This morning it only got down to 31F, not quite reaching the record of 29F set in 1972. I wonder if the cold temperatures will be enough to cause freezing damage to some of the plants.

Earlier in the week I heard what I thought might have been a junco alarming in the morning. On a subsequent day, I saw a Fox Sparrow making the calls. The sparrow was sitting in the bird feeder. I couldn’t see anything in particular for it to alarm at.

This morning I heard it again. It was once again at the feeder. I did not see any cats or other potential provocations. Sections of the yard were blocked from my view, however.


I had calls, but decided to take them while out and about.

I walked to park and around the beach. No shorebirds that I noticed.

Close inspection reveals SJC faintly visible where the surface polish on the rock has been removed.


I stopped along the rocks between Sage Beach and the park. I looked for a modern petroglyph I had photographed in 2017, but couldn’t find it.

While looking, I did find three others I don’t remember seeing before.

One looked tapped in with a blunt object (perhaps another rock?) which mostly just scarred the surface polish.

NKH below, and maybe ED[?] above


The others appeared to have been created with something more like a screwdriver using different techniques.
From there I walked over to the airport.

It’s hard to say if I might have missed some things due to split attention, but I did not notice anything new for the year or unexpected.

I stopped at Swan Lake before going home. There seems to be just one Trumpeter Swan remaining.

I first noticed this modern petroglyph in 2017, but had difficulty relocating it because of the seaweed growing over it.


I went back out again this evening after reviewing my 2017 petroglyph photo. I did refind it with the reminder. I had missed it in part because seaweed was growing in it. The changed appearance made it a little more difficult to spot.
A friend had some time to kill, so we went for a bit of a drive as the sun set.

The nearly full moon caught my attention on way back towards town from Sandy Beach.


I requested to be dropped off at Crescent Harbor and spent some time watching the moon and taking pictures.

I learned about birder livestreamers on twitch on the ABA podcast

It made me wonder if it might be worth trying something along those lines. I don’t think I would be interested in live streaming from out in the field, but it could be fun to stream photo processing and iNaturalist stuff. Most days I spend an hour or more working on these, and livestreaming may not add much overhead to the effort.