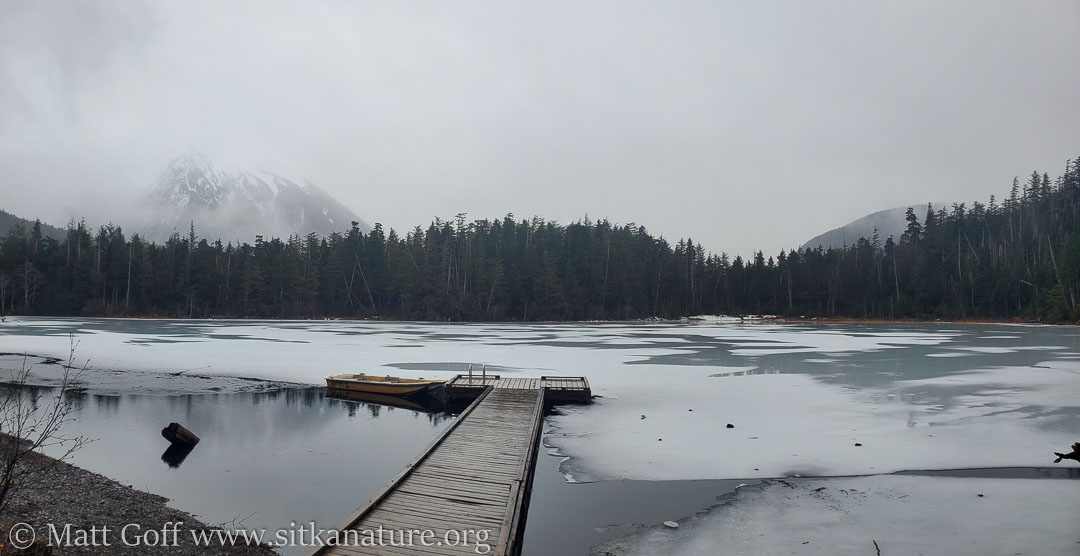 Reviewing this photo at home, I began to doubt my initial impression of Polytrichaceae. This reminded me of Plagoimnium. It took additional microscope investigations to work through to an identification of Oligotrichum parallelum

Overcast with occasional rain. Breezy at some locations, and temperatures in the 40s.

With only .05 inches of precipitation at the airport today, it’s likely the total for February will fall short of the record.

Unlike the past couple of days, it did rain in town. On a drive out to Starrigavan late this morning, it was raining pretty hard. However, rainfall in the central areas was light.

Snow persists on the trail to Heart Lake


Kitty and I walked up to Heart Lake around midday. The lake is still mostly covered in ice, there is also snow on the trail where it is out in the open. The juxtaposition caused me to wonder how large a lake needs to be for there to be lake effect snow.


I photographed and collected a few bryophytes off a rock outcrop. Some of them looked like Diplophyllum to me. I noticed significantly different sizes, but am not sure if they are all the same species, just in different microhabitats that support different sized plants.

After lunch at the Beak we went back to Starrigavan. The rain had let up, and we walked around the Estuary Life trail loop.

The gravel showing caught my eye from a distance. That hole appears to me to be the oldest


I notcied a place that looked dug up in the estuary, so walked over to check it out. There had been digging somewhat recently. I think at a couple of different times. I saw dog a couple of dog tracks, but I think they were made well after the digging took place. My best guess is a bear did a little digging for roots, but it could have been a dog out there digging.

We had a good turnout at ultimate this evening, playing 6 on 6. There was enough wind to make throws a little less predictable, but the rain held off.

First fly of the year at the porch light. A caddisfly was there as well, but left in the moments it took for me to get my camera.