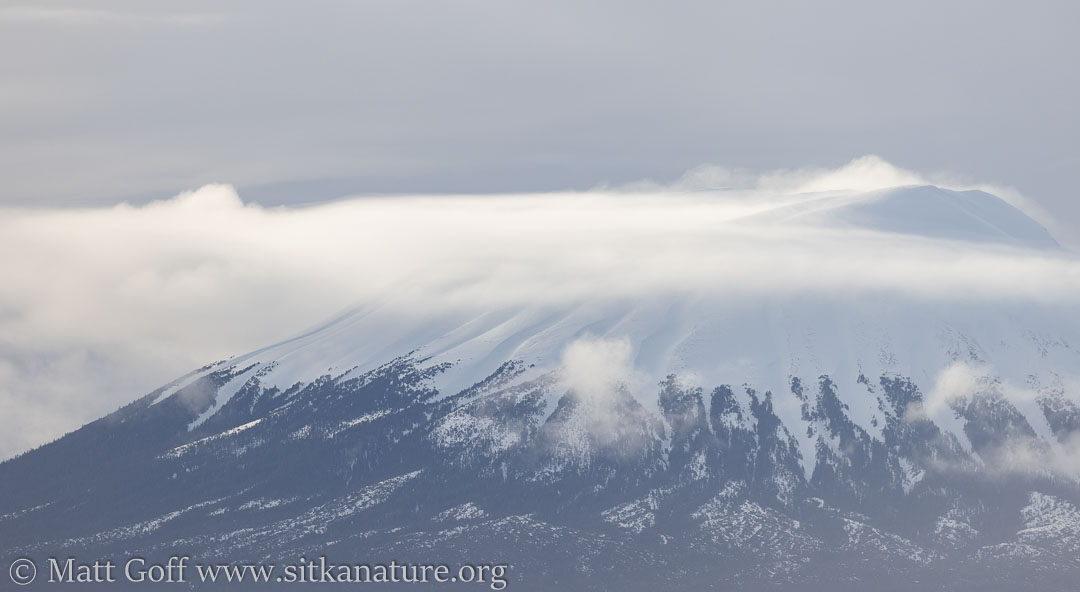 I spent the morning at home. Looking out the north windows, I could see some blue sky through broken clouds. To the south, it looked like sun was shining in places.

I did not get out until after lunch. By this time clouds had increased, but it did not look like any rain was in the offing. This February will end up with the second highest total rainfall. After the remarkably wet first half of the month, it’s been much drier over the past week or two.

Looking back across the channel from the northwest end


Today was my first day of doing some mammal observing for a geotechnical drilling project. They are surveying the area in preparation for constructing a new float plane dock at the northwest end of the channel.

My view to the west while observing for marine mammals


Heading out, I dressed warmly, but given the calm winds, relatively warm temperatures, and dry conditions, I did not over do it. When I arrived at the harbor, I noticed dark clouds out to the northwest that were clearly dropping rain. Fortunately the shower did not travel towards the channel, and my 3 hours there were dry.

I did not spot any mammals during my time on watch. It’s only a 50 meter zone where they would need to stop drilling, but I’ve been instructed to record any mammals I see in the general area.

I did keep track of the birds. Nothing unusual (I’ll cross my finger that a Western Grebe might show up during my time out.) I did see a flock of White-winged Scoters out beyond the breakwater.

The observing location is at the top of the wheelhouse of the 75ft landing craft which is serving as the drilling platform. It’s right near the exhaust pipes. Part of the time I could smell the exhaust and it was starting to bother my head. Fortunately the very light breeze shifted, I found a spot that wasn’t getting the smell, or maybe I just adapted. Whatever the case, I wasn’t noticing it after a while.


After my shift I stopped home briefly and found out Connor had gone to Sandy Beach for low tide. It was just past the time of low, but I headed out for a bit anyway. Connor hadn’t found too much of particular interest. I poked around for a bit (somewhat limited because I had neglected to bring my close focusing lenses which help me see) before heading back home.


I continued working to catch up on publishing recent photojournals and spent more time working on microscope photos of a moss I collected yesterday (which I now believe is Oligotrichum parallelum).