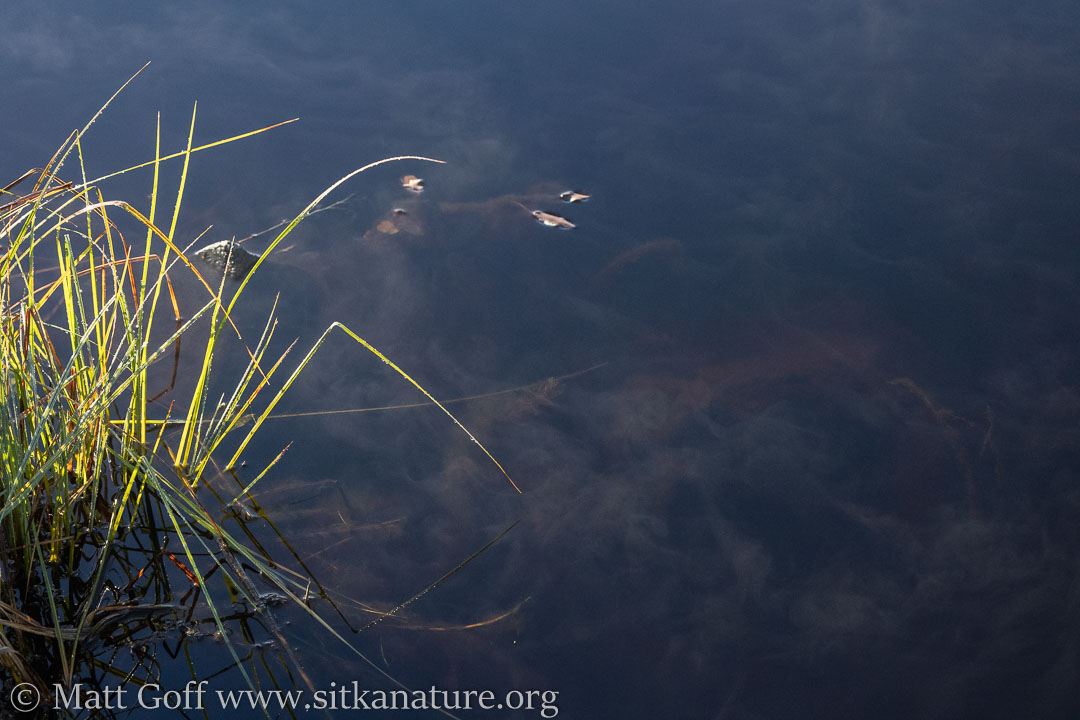 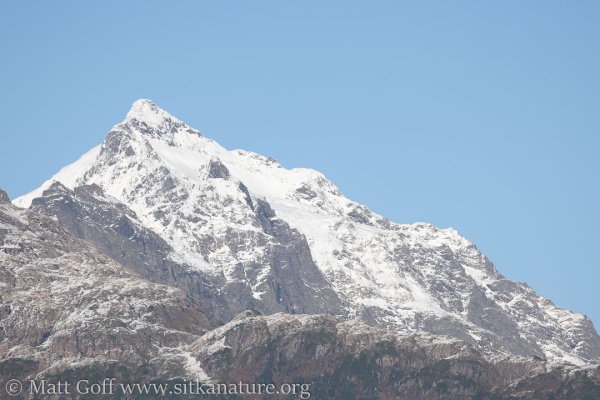 Cloudless skies and chilly this morning, with temperatures warming to around 50. Calm this morning with a decent breeze this afternoon out of the north/northwest.

This morning’s official low looks like it was 34F, which ties the record low for the date. I was a little surprised to realize that only 9 years have seen a freezing temperatures before mid-October. At least at the airport (I’m sure there are more at the Geodetic Way station.) 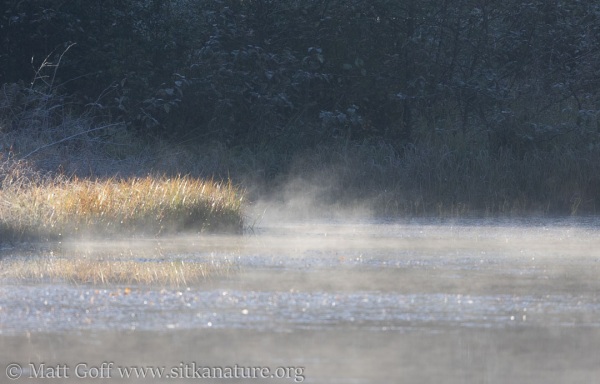 I visited Swan Lake before my call this morning. It was fairly quiet, with the usual assortment of Mallards. I did see a Northern Pintail fly over and an American Wigeon fly by. There was a Gadwall on the lake as well. 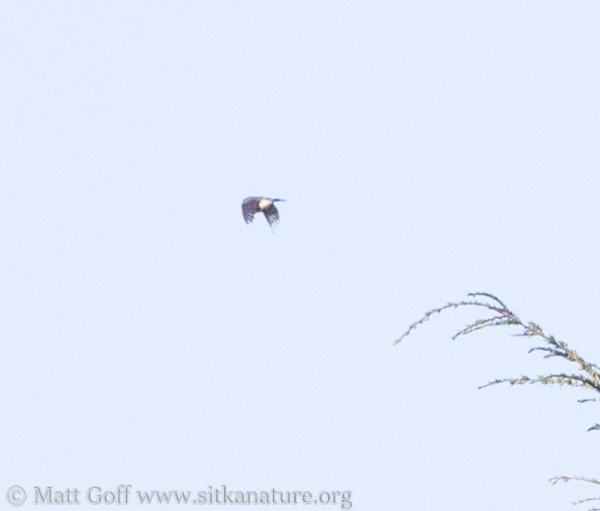 Shortly before I left, I heard a bird flying over that caught my attention. The call notes didn’t sound immediately familiar. I saw a small bird flying across the lake. It landed in a hemlock on the far side. I decided to take pictures, and happened to catch it flying away from the hemlock. The picture I got is poor, but doesn’t look immediately familiar. It was hard to be certain of size, but I’m thinking probably warbler-sized or possibly sparrow-sized. Maybe a small thrush, but it didn’t seem that big to me.

I’m curious what it was, but it may remain one of those mysteries.

This afternoon I headed out again, this time taking something of a wandering route. I ended up going up DeGroff then Baranof to the cemetery. 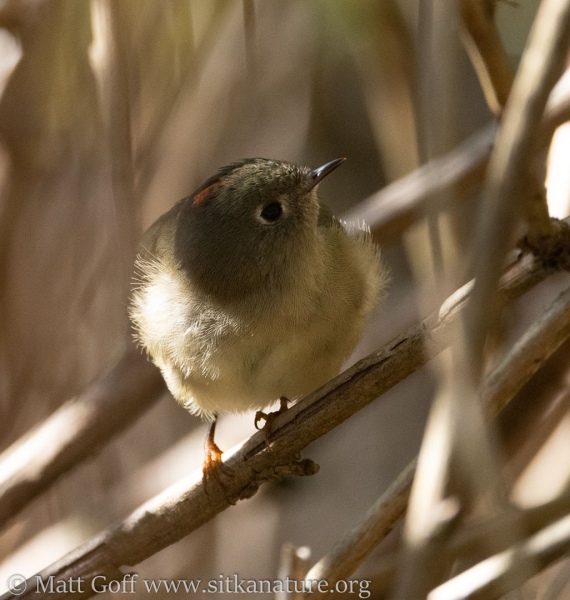 As I arrived at the trailhead parking, I heard something to my left and noticed a Ruby-crowned Kinglet preening. I followed it up the little drive that goes up around the cemetery, then felt like I was handed off to a Pacific Wren which I followed a bit further before it moved on.

A spot in the sun with little wind I relaxed there in the sun for a bit.

At the cemetery an Anna’s Hummingbird buzzed around between different trees/perches and did some singing before moving on.

From there to Monastery Street, down to Kincaid, and over to Lake street.

Up Halibut Point Road then to Hemlock Street, up Erler, and then on to Andrews(?) street where I took the short cut to the short road that comes up off of Katlian.

I walked down Kaagwaantaan and saw the house that has started to collapse, leading to the closure of Katlian Street. The pictures I had seen were from the front, and it was not apparent just how much the house has already collapsed. This doesn’t appear to be a matter of shoring up, as the back part has really pretty much fallen in already.

Down to Katlian Street by the Naa Kahidi, and over to Castle Hill. 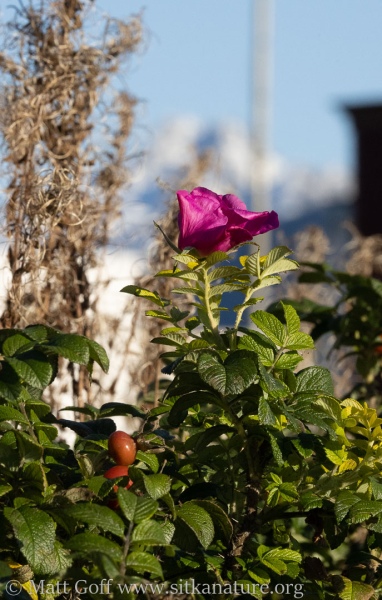 I was interested, but not surprised, to see a couple of rose flowers along the Pioneer Home hedge.

From Castle Hill I started home, but cut around on the water side of the library and the Centennial Building. 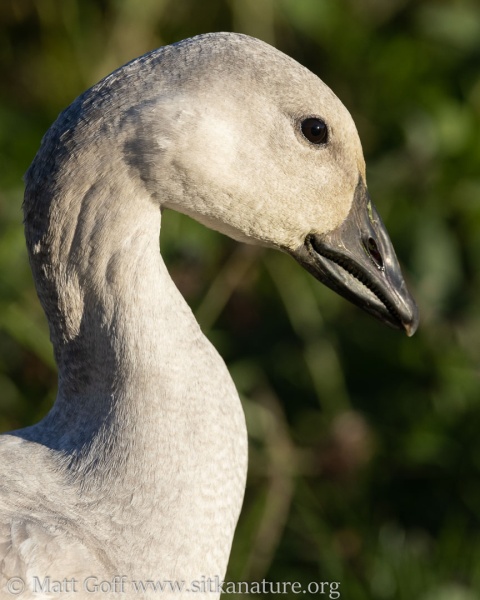 At the Crescent Harbor boat haul out, someone pointed out a young Snow Goose to me. I like to think I would have seen it, but I may have walked right by.

It was fairly tame, mostly just focusing on eating greens growing there. Presumably it got separated from its flock, and assuming nothing happens to it before it can join another southbound flock, it will move on before long. 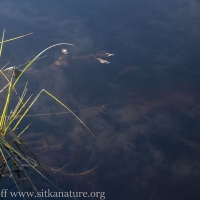 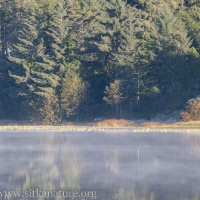 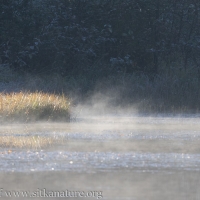 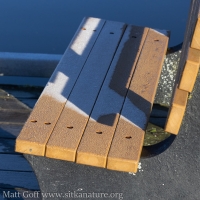 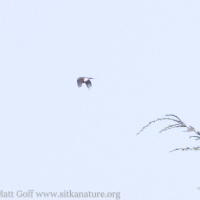 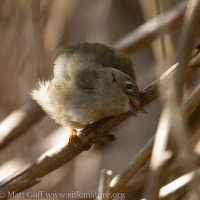 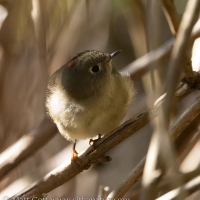 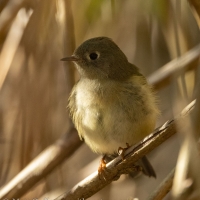 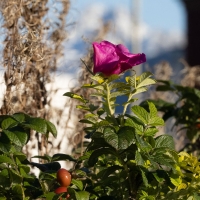 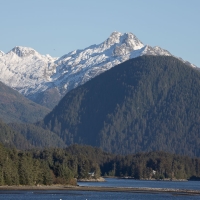 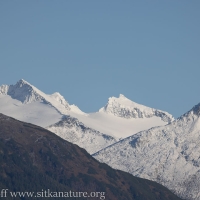 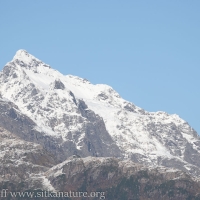 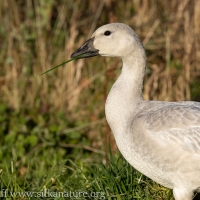 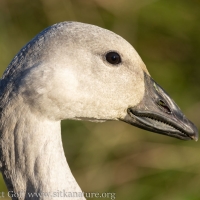 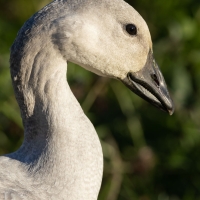