With a pretty good fall gale forecast to arrive tomorrow, this seemed like it might be the last opportunity for the year to get out in conditions approaching summer (~60F and sunny). Rowan suggested we go out to Mosquito Cove, so around mid-morning we drove out (on the much improved road) to the trailhead. It was mostly sunny and calm as we started out taking the shore side of the loop though by the time I had made it around the loop, (Connor and Rowan had gone on ahead to Mosquito Cove and opted to come back around the way they came) it was becoming overcast and a little breezy.

On my way around I photographed some fungi (and other presumed fungi). I also noted the small black balls where I had previously found them (but don’t think I’ve ended up writing about yet) on a trailside mound of partially exposed volcanic ash. I was somewhat satisfied to notice mites and springtails crawling around where I was taking pictures of some fungi (though I might not have had I not noticed one in a picture, first).

Upon making it around the loop, I started back along the shore to where Connor and Rowan were looking around for something. On the way I was briefly distracted by a Northern Flicker (that I think I had heard when I was coming down from the inland part of the loop) – I didn’t get a good look through the obscuring spruce boughs, but I saw enough to recognize it. Out on the beach I wanted to check the pool where Rowan had found rat-tailed maggots last fall (something which I don’t think I got up on the blog at the time – though it will eventually get posted when I get the pictures processed). No rat-tailed maggots this year, but I did notice several other things that seemed interesting (I’ll write more on these things later).

It was around the time we were getting ready to go that I realized I had lost a container with fungus that I photographed and collected. There were two likely places I thought it might have fallen out, though unfortunately at opposite sides of the trail. I sent Rowan to look at one, and Connor the other while I retraced my steps along the trail. Neither Connor nor Rowan found it, and we needed to get back in to town, so we came back later in the afternoon and made a quick circuit together. We made it around in about 30 minutes, having some fun running up, over, and around the little hills and curves along the outer part of the loop. We still didn’t find the container, however.

[Update: On a return trip Saturday as part of a mushroom walk done by a visiting speaker, I noticed the container tucked in a little trail-side nook, right near one of the places I thought I might have had it fall out of my pocket. It seems someone noticed it and set it up – I’m not sure if they it was more likely to be found there or not.]

There was a juvenile Marbled Murrelet not too far off the shore near spruce bench beach. Also some fish jumping – Rowan thought they looked like Dolly Varden. They didn’t seem very big. 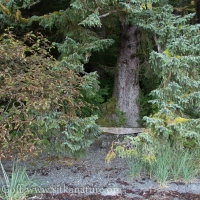 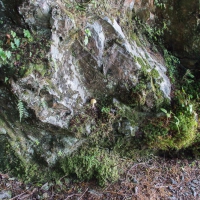 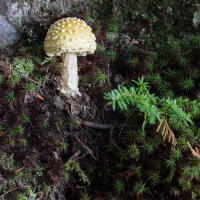 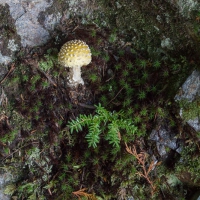 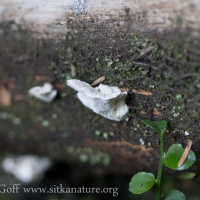 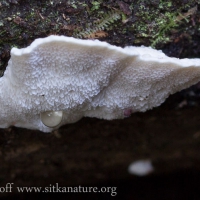 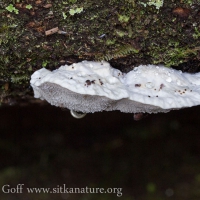 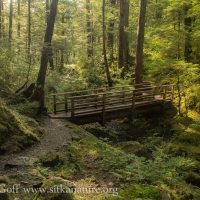