I woke to a sunny morning with calm conditions. A nice spring day. Although it’s still a bit early for shorebirds, with a relatively low tide (coming up by the time I checked), I thought I would take a walk around the park just in case an early shorebird migrant or two was around. I … Read more

Today’s weather was getting to be like people sometimes refer to as herring weather. Perhaps more strictly we would have needed to see more rain in the mix, as today was just mostly graupel and little bits of snow falling in sometimes heavy showers. Between showers the sun would shine, and throughout it all there … Read more

Connor, Rowan, and I spent some time down at John Brown’s Beach this morning. I mostly just spent time around the corner from the sandy beach where I could enjoy some sun and have a nice view of Mt. Edgecumbe.

I took these pictures while walking to UAS for class.

Most of today’s pictures came from a trip to Starrigavan. Connor and Rowan lost track of me and went out Mosquito Cove Trail on their own. I wasn’t feeling that well, so was content to sit in the sun on sunny point a little way down from the start of Mosquito Cove Trail. 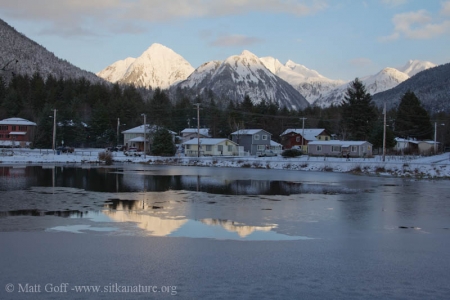