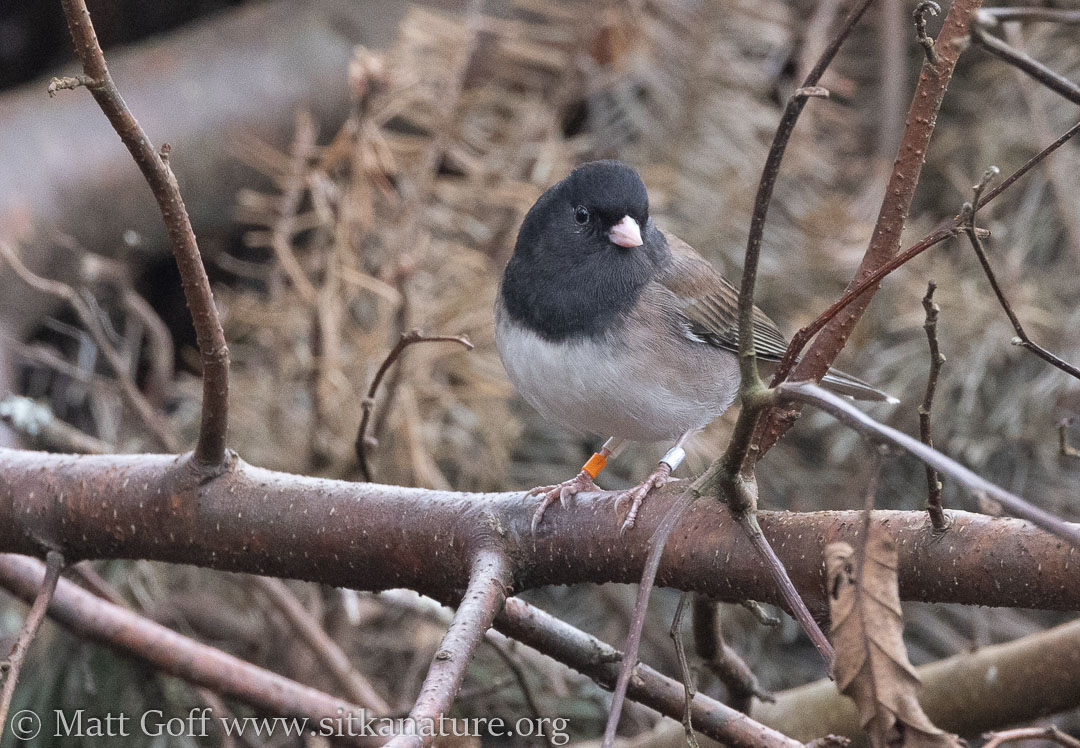 As yet unidentified moss in the Orthotrichaceae family

Cloudy with occasional rain and some wind out of the southwest (at least when I was out).

I did not make it out until after lunch.


Early in the afternoon I noticed a banded junco out in the yard. It stuck around long enough for me to get my binoculars and camera. It’s band combination was white over orange on left and aluminum. I don’t remember seeing it previously, but it was banded in 2018 at my house. The other one has aluminum over yellow on left and black over orange on right. I think it was banded in 2019.

I checked the channel before moving a friend’s car to the airport in advance of their return from a trip.


The channel was quieter than yesterday, but a decent flock of gulls was hanging out on the ramp. I did not spot any that looked unusual, however.

Walking back along old airport road, I noticed a couple places it looked like had seen recent (or repeated) foot traffic.

In one case, I suspect it led to a camp where folks are staying.

I’m not sure about the other cases, but I wonder if it’s a result of some surveying work. I saw surveyors by the channel yesterday, so it may be they have a project going on in the area.


I saw a few early blueberry (Vaccinium ovalifolium) flowers fully out along old airport road and in Totem Park. I saw some starting to come out along Thimbleberry Lake trail Sunday, but these were the first open ones I’ve seen this year.

By the time I made it back the ramp had cleared of gulls (presumably scared off by a dog, eagle, or just someone walking or driving too close).

Driving across the bridge, I saw the flats at Totem Park had many gulls out there. That settled my indecision about whether to go next.

As I arrived out on the flats, I could see the dark gray of a heavy drizzle heading my way.

Fortunately it did not last too long. Propelled by a reasonable breeze it did soak one half of me while my other side remained dry.


Among the 1000+ gulls, I did spot the much darker mantled Slaty-backed Gull. I took my time making my way a bit closer to get better photos.
A couple of different times it took off. Once by itself, moving a short distance down the beach. The second time many gulls took off, and I lost sight of it. However, it ended up circling around and landing back near the same location with many that had taken off.

I made some good progress processing the microscope photos I took yesterday and even posted a handful of observations. Still lots of recent collection work to do, however (to say nothing of older collections).