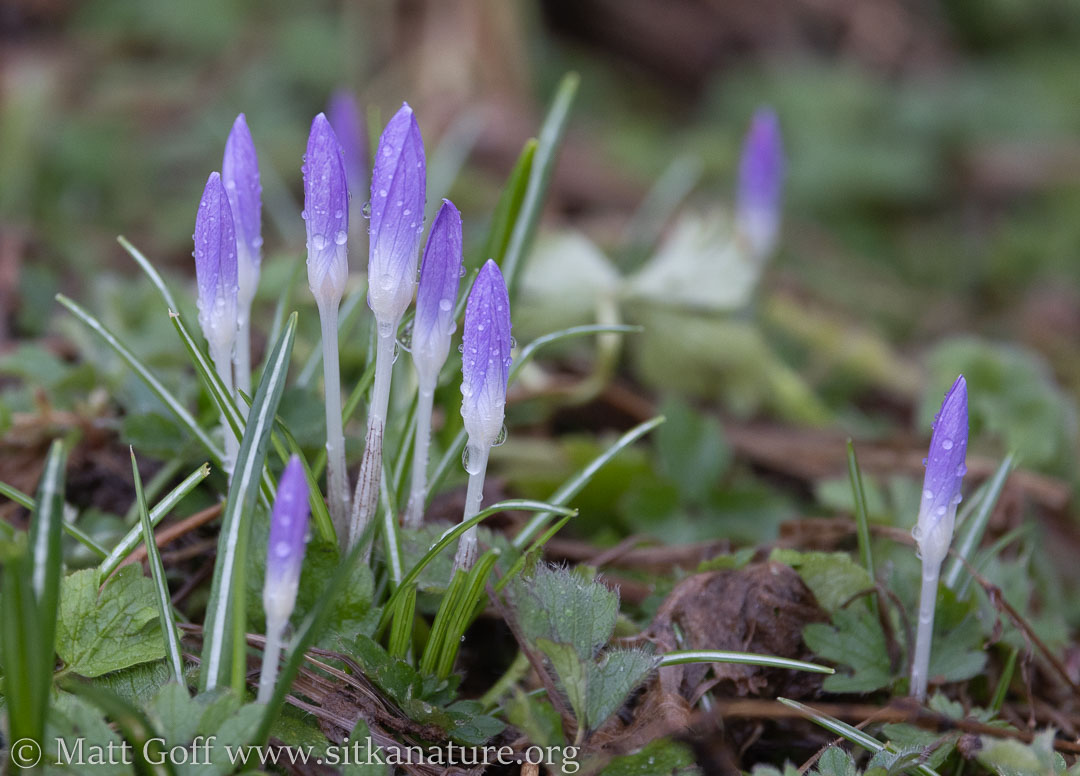 A leaf from a moss in the family Bryaceae. From collection made Feb 16th along Herring Cove trail.

Cloudy with period of rain. Wind out of the Southeast.

Although it rained overnight, this morning the rain held off until afternoon.

I had a call this morning that kept me in (despite a message about the Purple Finch returning to the Monastery Street feeder).

By the time I was able to get out after lunch, it had started raining. It wasn’t just a light rain, but a good shower.


I drove over to check the channel. I saw many gulls, but a large majority were down by ANB Harbor. I was not very keen on walking out on the harbor with the rain showing no signs of letting up. In the end, the pull of a desire to check if there might be anything unusual in the mix convinced me to do it.

There were easily hundreds, and probably over a thousand gulls working the waters from near North Pacific Seafoods and following the current along the outer part of ANB Harbor.

I scanned them all a couple of times, but none stood out to me. Had it been less windy or rainy, I would have stayed longer.


At least four Mallards were in the midst of the thickest part of the gulls. They appeared to be picking at the bits of fish waste that had attracted the gulls.

Upon my return home I walked around the east side of my house to get to my normal sitting place on the south step.

As much time as I spend outside, very little of it has been spent in my yard. It’s interesting to realize there are many places around town where I’ve spent more time than I have in my yard, especially that on the east side of my house. I’m thinking it would be good to make more of an effort to spend time in the yard, but time will tell.

I spent 10 minutes sitting on the step. I could judge the wind a bit by how the ravens were flying in one direction compared to the other. Into the wind, their flight was slower and more labored. There was not any steady wind where I was sitting, however.

A pair of chickadees moved through the alders and spruce on the south lot boundary. They did not visit the sunflower seeds in the feeder.

While sitting I tried to feel an expanded sense of space. I’m not really sure how to describe it, but somehow having a sense of the greater space beyond just my immediate and nearby surroundings.

The rain let up and stopped as I came back in to get some things done.

As I prepared to head back out shortly after 5pm for a walk around neighborhood the rain started up. Fortunately it didn’t last as long this time.

I was motivated in part by the hope of finding the Purple Finch. I had not luck in that regard.


When I checked the yard where the finch had been seen, I noticed a heron in a tree beyond the yard. It turned out to be two herons, which I only saw after the one in front stopped stretching.
I walked over to Highland Street to try for a better look, but two other people and at least three dogs barking on the street made the herons nervous enough that one took off just as Igot to where I could see them enough to try for a picture.

Wigeons resting on Swan Lake. The two on the right are American Wigeons and I suspect the one on the left is a Eurasian Wigeon


I spent a little time watching the wigeons at Swan Lake. I’m still working to confirm female Eurasian Wigeon. I’m pretty sure about it’s ID, but apparently the best character to document is whether the underwing coverts are gray and don’t contrast with the rest of the underwing.


I spent at least a couple of hours working on collections this evening. This means pulling them out and taking various pictures through dissecting and compound microscopes. It can be time consuming. This is especially true for me at this stage. I think as I get to recognize more of the organisms I’m looking at, I’ll need to take fewer photos, and probably in many cases won’t need to use the microscope at all.

Depending on how the light is set on the microscope, what shows up varies. This is a focus stack of 9 images taken of a small mite found in moss collection made Feb 16th along Herring Cove trail.


In the hours I spent, I made it through three collections. However, that ended up being something like 8 different observations. I tend to poke around instead of just going for what the collection was made for. I document the things I find.