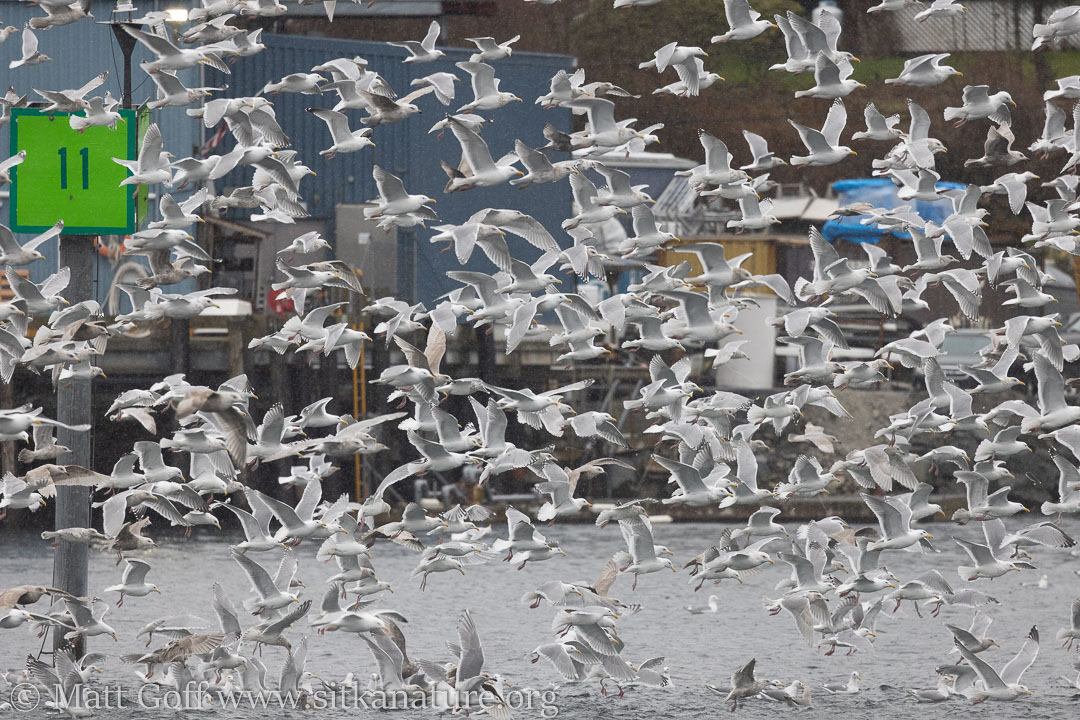 Overcast with rain (primarily in the afternoon). Winds out of the southeast.

Continuing the pattern of the past couple of days, my time outside coincided with the rain.

I spent a bit more than an hour early in the afternoon watching the many gulls at the channel.

Some of the many gulls at the channel


I’m guessing there were comfortably over 1000 gulls in the channel, with hundreds more taking a break on the shore or various structures. All together, I wouldn’t be surprised if there were 2500 or more.

Largest numbers were Glaucous-winged Gulls and Cook Inlet Gulls. There were also plenty of Thayer’s Gulls and Short-billed Gulls. I saw quite a few that seemed good for Herring Gulls, and at least two California Gulls. On a later visit I saw a first year Glaucous Gull or two.

It rained while I was there, so I found it especially handy to have car as blind.


The wind made it easier for taking pictures of birds in flight and I spent some of my time doing that. I was set up so as they were flying more slowly against the wind I could track them with my camera. Often they were slowing down even more as they came in to land.

Black on wingtips dark and fairly extensive. A black dot along with the red gonys, dark eyes and deep red ring around them all point to California Gull. Also a bit smaller than the Glaucous-winged Gulls, Herring Gulls and hybrids that were around.


While taking pictures of a California Gull, I tried to see the telephoto view through my camera (with my right eye) and the bare (left) eye view at the same time. I could manage it as long as I didn’t focus my attention too much on one or the other. I had the impression of overlapping images, sometimes verging on a picture-in-picture sort of view.


The gulls were a bit flighty. When crows decided to take off, so did many of the gulls, but most just flew a circle and returned to the ramp.

The tide was high. I’m not sure, but it seems plausible this makes them more likely to stick around the channel rather then go to the park flats. On the other hand, some years they make heavy use of buildings with large roofs around the downtown area.

I sat for 15 minutes when I got home. Rain was letting up while I did.

Things were quiet bird-wise. I closed my eyes and tried to attend to sounds and smells simultaneously for a bit.

I also tried to feel the expanded sense of place I was working on the other day. For whatever reason, I didn’t feel it in the same way today.

I went out again briefly this evening. Things had quieted down a bit at the channel, though there were still plenty of gulls.

This evening I worked on designing a box for a card deck featuring a picture of old growth forest.