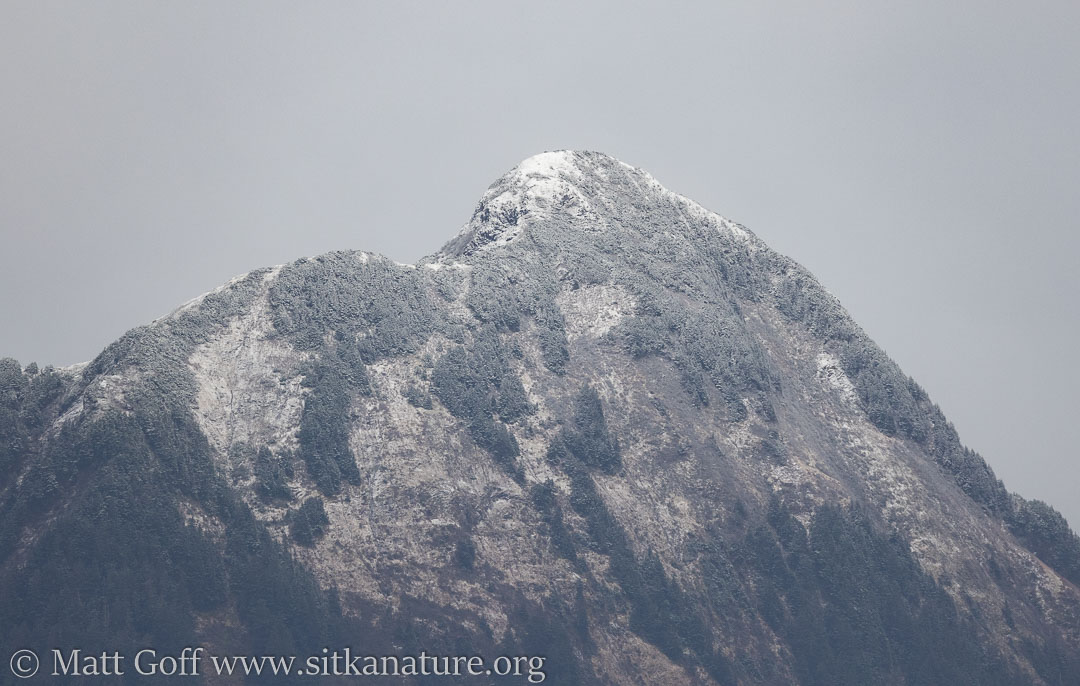 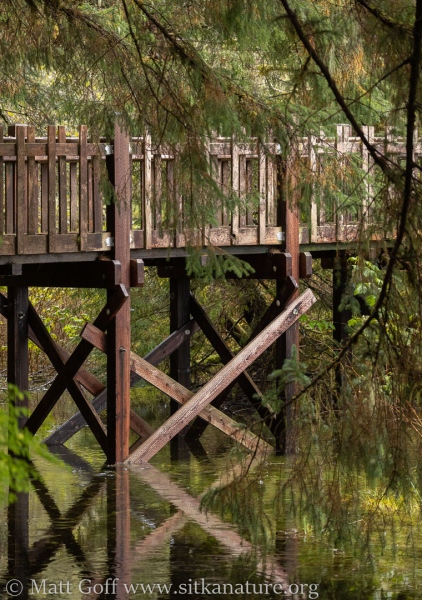 Showers early, broken clouds in the morning. A more extended shower in the afternoon. 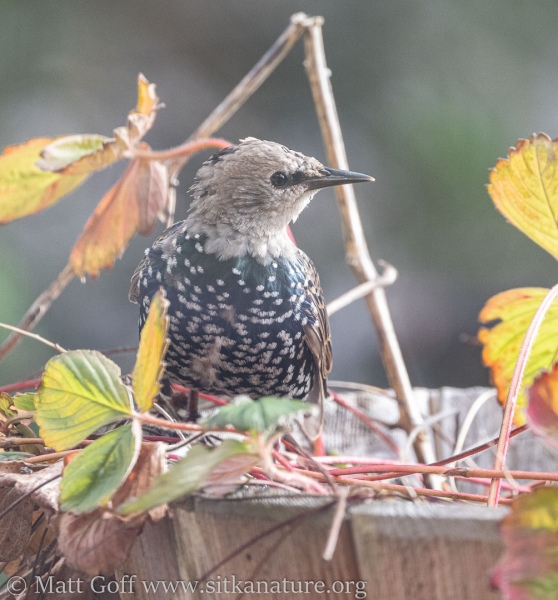 I spent the morning at home working on things and being a bit annoyed by the starlings who have discovered the suet feeder. I tried shifting it around and adding a lid over the top to make it more difficult for them to use it. My efforts met with limited success.

I don’t really mind starlings generally, but they tend to show up in bigger numbers. They can really go through the suet, and they are prone to making a bit of a mess. Since there are often many of them, they can’t all be at the feeder at once, and wander around a bit. Droppings can accumulate in places I don’t want them as a result.

In the first part of the afternoon I recorded a conversation with Kitty for my radio show tomorrow.

We had considered doing some birding for the eBird big day, but as it turned out, this morning would have been better weather-wise. 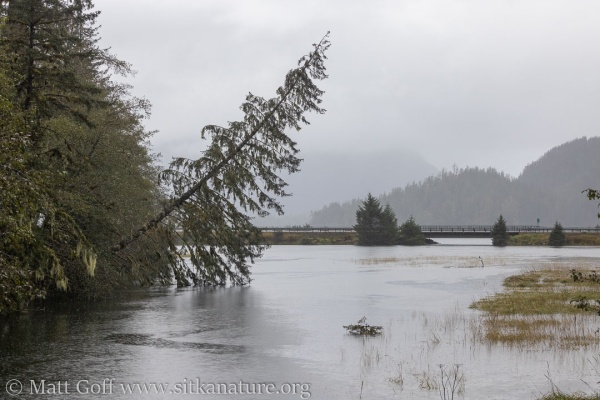 We stopped by Starrigavan briefly. I wanted to check out the high tide. It was not quite as high as yesterday.

We stopped by the channel to check the birds there. It was raining, which made it a little less easy to see (especially through the car windows). 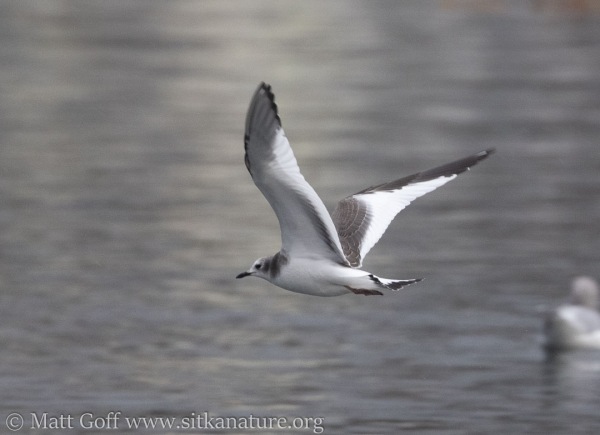 I took some pictures of a Sabine’s Gull as it was flying, but I didn’t recognize it as such at first. There were kittiwakes there as well, and I wasn’t fully attending to the details while taking pictures.

When I saw the gull again further down the channel, I realized it didn’t look quite right for the juvenile Black-legged Kittiwake (which I had been assuming I was photographing before, without really thinking about it). It was then I realized it was probably a Sabine’s Gull, and that I had seen it shortly after we arrived.

There were shearwaters and Fork-tailed Storm-Petrels in Crescent Bay.

After Kitty needed to head home, I went back to the channel hoping for better looks at the Sabine’s Gull. I tried ANB Harbor as well, and did see it out beyond the bridge from the south end of the outer float. 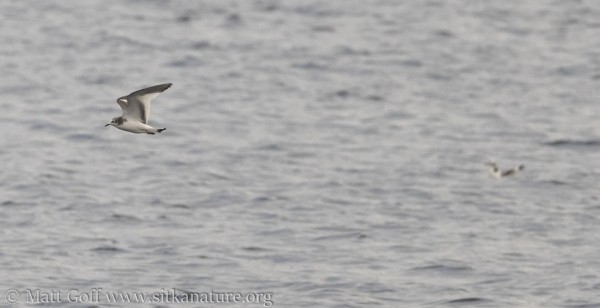 I hurried to a viewing spot under O’Connell bridge and was able to watch the Sabine’s Gull for a few minutes before it flew off toward the airport. Reviewing my photos, it looked like there might have been a second one as well. It/they were not particularly close, so it is difficult for me to be sure.

The shearwaters had departed by this time, and I wasn’t able to get any photos of them. With several sightings from shore over the past month, I’m beginning to think this might be a more regular occurrence during rough fall weather. They don’t tend to stick to one place very long, so it would be easy to miss brief forays into areas visible from the road system. 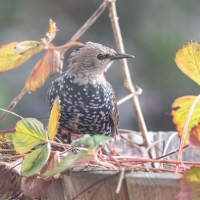 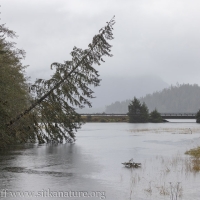 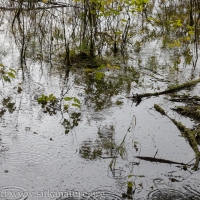 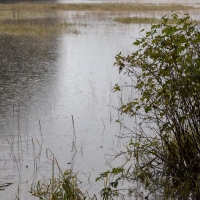 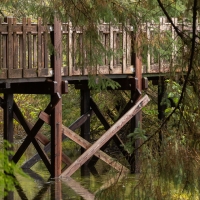 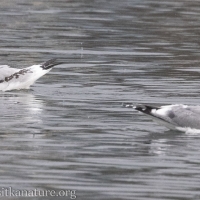 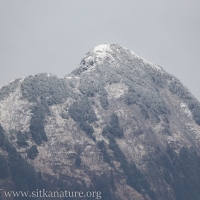 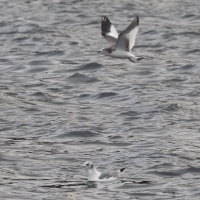 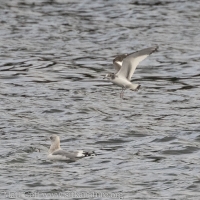 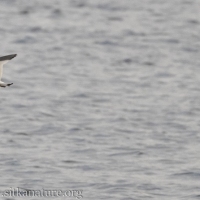 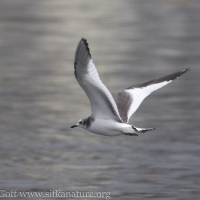