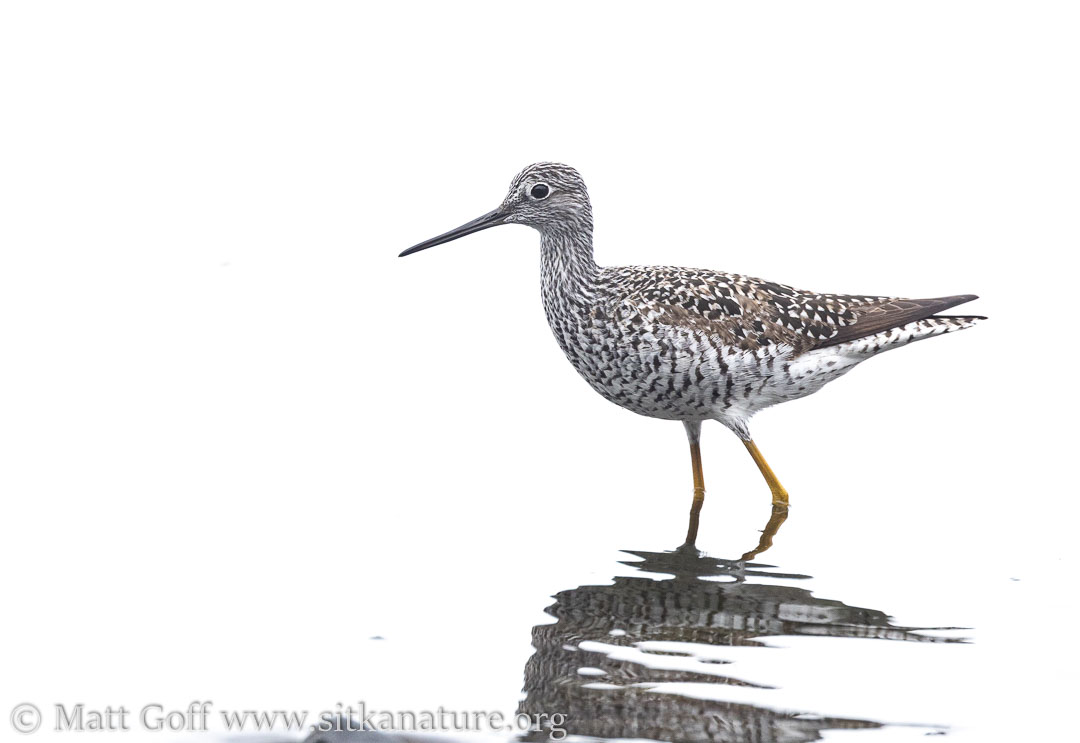 Three Short-billed Dowitchers, a Marbled Godwit, and a Greater Yellowlegs

I had a call and decided to wait until after it was done to get out. I might have chosen otherwise had I realized the sun would go behind the clouds so quickly.

I walked to Swan Lake. It seemed like fewer birds were singing, but I did hear a Song Sparrow and Ruby-crowned Kinglet.

The Trumpeter Swan is still at the lake.

I’ve still not observed any swallows, though I wondered if I might have heard some today.

From the lake I walked down to park.

Cutting through the Super 8 parking lot, I noticed a couple of folks who appeared to be working on an installing DirectTV for the hotel. I was on my way when I heard one call out to see if he could get a favor. I didn’t think he was talking to me, but happened to glance back and saw him coming my way.

It turned out he was from Chicago had always wanted to come to Alaska but never thought he would make it. He was excited to be here and wanted me to take a picture of him with Mount Verstovia in the background using my nice camera.

I was requested to take this photo (which I shared via email), as this fellow was excited to be in Alaska and see the mountains.


I’m pretty sure the telephoto lens I had on wasn’t the best tool, but I backed myself up to the other side of the trailer court and was able to get him and the full mountain showing in the same frame.

I appreciated observing his excitement just to be here. It felt inspiring to me to try and embrace/invite that kind of feeling more in my daily experience of being here.

Walking by the former ball field (turning garden?) between the playground and the Russian Bishop’s House, I saw a Song Sparrow perched on the chain link fence. It was very tolerant of my close passing. Perhaps it’s used to foot traffic there.

The tide was up.

I sat on the shore for a bit in front of the visitor center. I hoped the shorebirds would come near.


A Greater Yellowlegs did walk not far in front of me, but the Marbled Godwit and three Short-billed Dowitchers stayed further away.

Many gulls loafed on the beach. I wonder why – they had been sparser of late.

The Black Turnstones were just starting to come in while I was there.

The overcast was thin enough I could see a bright spot where sun was. I was a little surprised that I could feel some warmth from it. I sat for a bit to appreciate it.


I hadn’t planned to get out again today, but got reports of birds at the park later in the afternoon/evening.

First it was Greater White-fronted Geese, then a Pacific Golden-Plover. I however, by the time I got to park, I found out the plover had flown off. The geese weren’t around anymore either.

So far this year, several things seem to be just touching down at the park beach and not staying long.

I went over and looked at the airport, but several dog walkers dissuaded me from looking for birds there.

I stopped briefly by Swan Lake, and again came up empty on swallows.

These flowers are just starting to open


My final stop was at Baranof Street muskeg to check out crowberry flowers. Some were open, and others were just starting to open.

Reviewing photos while livestreaming this evening, I began to wonder about the flowers. I think I may have only taken pictures of male flowers so far. I’m not sure I’ve even seen female flowers. I may have to look into it further and see if I can find some.