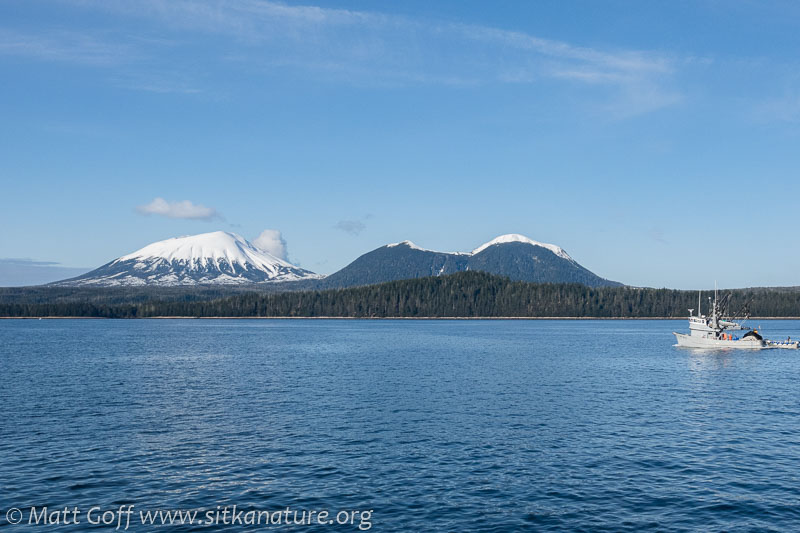 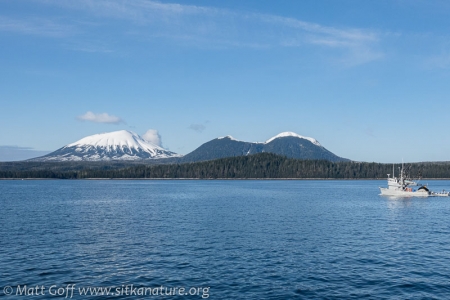 Today was the annual Food Web spring fundraising cruise for Sitka Whalefest. It is timed to coincide with herring season, and this year’s weather was remarkably nice for it.

Long-line season has not yet started, so the channel was very quiet for birds. There were a few Long-tailed Ducks, but otherwise there were more visiting herring tenders than there were birds.

From the channel we headed northwest towards where the herring predators had been hanging out recently. Apparently they had been gathered up in the vicinity of Guide Island and Promisla Bay yesterday.

On our way, we made a brief stop near a cove on Middle Island where there were dozens of floats out for branches (I was a little surprised at how many).

Going past Gagarin Island, we saw the boats were out towards south Kruzof, so we went out that direction.

Near Fred’s Creek we did find a group of a humpbacks that were cooperatively lunging (possibly with bubble nets). We got some nice views of those as well as many other scattered individuals.

There had been a report of spawning out near Shoals Point, so we went out as far as Low Island. It was surprisingly calm, but other than a dense group of sea lions hanging together, it was fairly quiet.

Motoring back along the Kruzof shoreline we saw quite a few Harbor Porpoise.

Overall, bird activity for the trip was fairly low. The channel was quiet, I saw a flock of 100 or more Surf Scoters along the shoreline of Middle Island, and a similar sized flock of mostly White-winged Scoters along the Kruzof shoreline. The groups of gulls were mostly on the beach (surprising how few there were overall) too far away to see clearly. Otherwise there were scattered individuals and small groups of typical winter waterbirds. Connor managed to photograph a flyby of a couple Ancient Murrelets – a good sighting for here, and his first of that species. 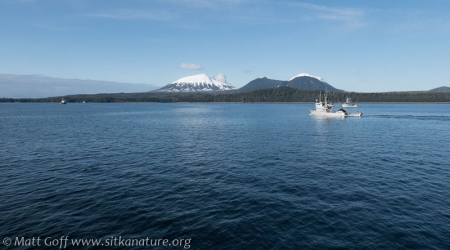