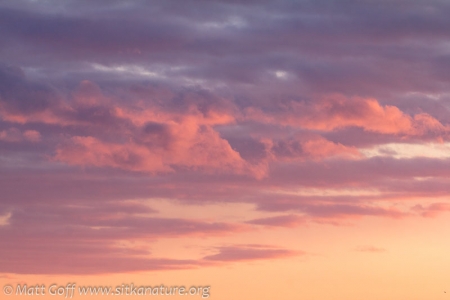 This evening continued a string of nice sunsets.

I had planned to go to the grocery store in the early evening, but after the last couple of evenings, I changed my mind and decided to head out a bit later to be there for the sunset. When I arrived, there were several other people standing and looking out to the west, some with cameras, others just taking in the view. I think several had stopped by just for the sunset, while others had paused on their way between their car and the store.

The clouds had not persisted quite as much as the prior couple of days, so there was not the same sort of dramatic pink glow coming from behind Mt. Edgecumbe where the cloud bank ended out of site. However, it was still a very nice sunset with a bit of a sun pillar providing an accent.

It started overcast today, but was mostly sunny by early afternoon. Winds aloft appeared to be reduced compared to yesterday, with much less sculpting of the clouds that did remain.

I spent most of the day inside, but did step outside a couple of times to enjoy the warmth of the sun. While the sun was pleasant, the air felt quite chilly.

Juncos continue to visit the feeder, as do Pine Siskins, Red Crossbills and Varied Thrushes. A Fox Sparrow has showed up as well.