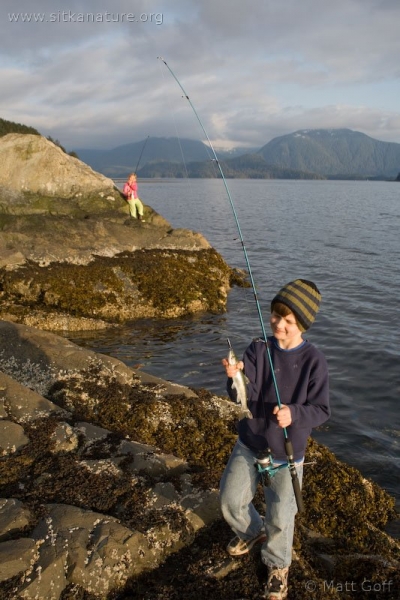 Connor is especially fond of fishing and has been asking about going for quite a while. I finally got around to purchasing a fishing license today with plans to get up early with Connor to go fishing early tomorrow morning, but it was a nice evening and Connor suggested we go this evening, so I decide that would be okay.

It’s about the time of year the Dolly Varden are making their return to the sea after wintering in freshwater lakes. It is also the time when salmon fry are making their outmigration from rivers, so that provides a decent opportunity to fish for Dollies from the beach. When we arrived at Sage Beach to a falling tide, there was just enoug land showing to make it out to Sage Rock. We set up fishing from there. At first I cast a few times, then I got Connor set up and let him go. I went a short distance away and cast for a little while longer before helping Rowan. 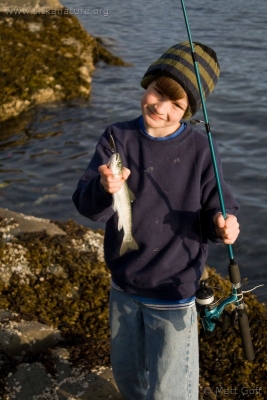 Before too long, Connor had a fish. He had it on the rocks almost before I realized he even had a fish. It was not particularly large, but he was excited to catch it. He managed to get the hook out, and I did a hack-job of cleaning it. It was starting to get late, so I let Rowan cast a few more times while I cleaned, then I cast a few more times, getting one strike (but not hooking the fish) beore we packed up to go. Before leaving the beach we picked some Goose Tongue (Plantago maritima) to cook with the fish.

When we got home, I started a fire, and cooked the fish and goose tongue wrapped in foil together in the coals. The fish turned out quite tasty, but none of us cared much for the goose tongue. Connor commented that he’s liked all the greens we’ve picked and ate so far, but he didn’t like these.