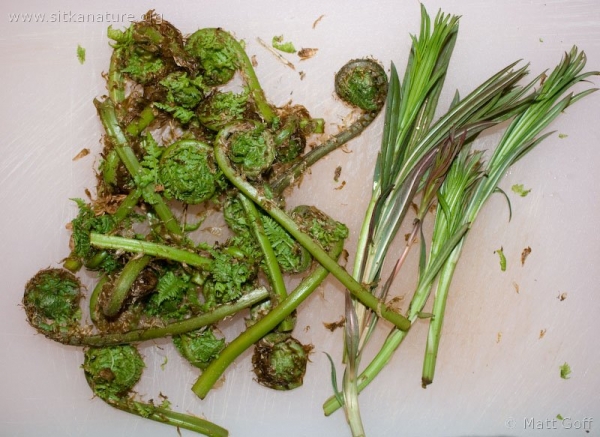 I had a couple of different ideas in mind for this week’s Wild Food Wednesday, but in the end (lack of) time and opportunity made the decision. We picked some Fireweed (Chamerion angustifolium) and Lady Fern (Athyrium filix-femina) fiddleheads. We probably would not have picked the fiddleheads, but Rowan insisted, and it turned out to be better that she did. I did not have much time, so we only spent a little bit of time gathering, though Connor and Rowan both gathered a little bit more after I went back inside.

I prepared the greens by steaming and buttering them. Connor and Rowan opted to have some salt. We each tried some of both, but all found the fiddleheads to be much tastier than the fireweed. Connor is the only one who was willing claim the fireweed was tasty, but even he made a face at the aftertaste. Rowan liked the fiddleheads enough that she even wanted to have an extra bite of mine.

The fireweed was already starting to leaf out, and it may have been later than optimal for picking and eating. They really started shooting up with the warm temperatures and sun of the last week.