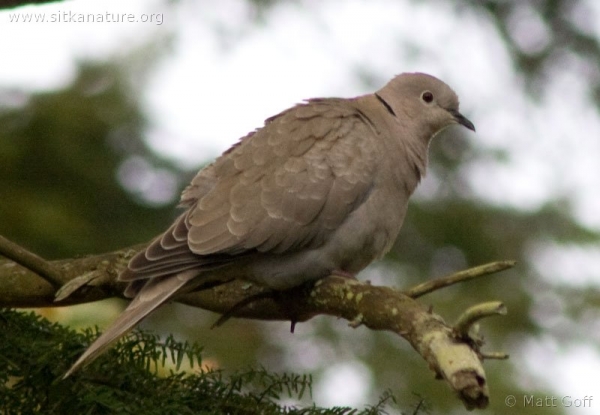 Marge Ward called to tell me that there was a Eurasian Collared-Dove in their yard. I was able to get some photos of it this morning.

Eurasian Collared-Doves have been reported from Southeast Alaska several times over the past 3 years. This is the first report from Sitka. It is unclear whether they are birds that have arrived on their own from further south, or if they have been released in the region. They are not included in the official checklist of Alaska Birds. This is probably due to the questions about where the birds seen in the state have originated. The official list only includes those that are “naturally occuring”. For example, Rock Doves (pigeons) are not included, though European Starlings are. Though neither are native to the state, starlings have made it an established on their own, while Rock Doves are only present in communities where they were introduced.