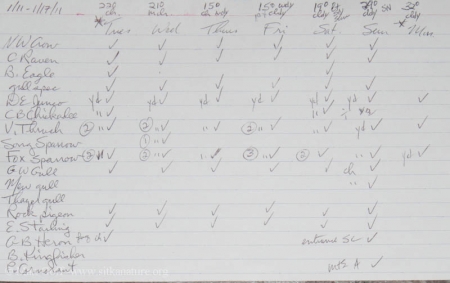 On a small island of trees at the bottom of the street we live on, there’s been a squirrel that Connor and Rowan have been paying some attention to. Though I am unsure of their reasoning, they have taken to calling it Hola, and most times we walk by, one of them will point him … Read more

A few nights ago after a relatively warm day, I noticed a moth on the window, the first one I had seen this year. I managed to capture it in a jar and got some photos of it. With help from bugguide.net, I got a likely identification of Variable Carpet Moth (Anticlea vasiliata). This species … Read more

This winter there were several Fox Sparrows hanging around the neighborhood. Most winters Fox Sparrows are Rare at best, so it was unusual to see as many as 8, despite the cooler and snowier conditions that prevailed this year as compared to other years. Of particular interest to me was a red form (Taiga form … Read more

A few evenings ago I noticed a female deer in our back yard. She seemed a bit larger than I might expect, so I wondered if she might be pregnant. It turns out that Sitka Blacktailed Deer typically give birth in late May or early June, so the timing would not suggest that she isn’t. … Read more