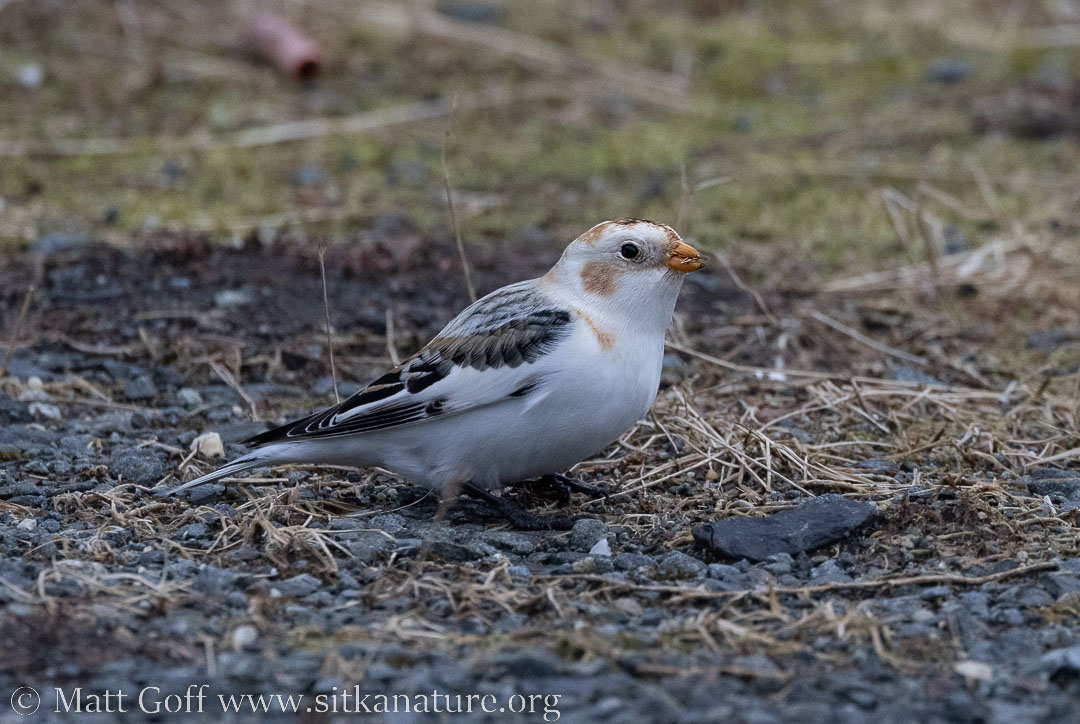 Mostly cloudy, becoming rainy in the afternoon. Gusty winds and temperatures near 50.

I went out to the industrial park this morning. This time it did not take as long to spot the Snow Bunting. I was able to get a couple of distant photos as it foraged along the side of the road.

Before long, it took off. I tried following it slowly in my car. It kept moving, and I quickly lost track of it.


I spent some time down on the dock. There were a handful of birds in the cove, including a Common Loon.

Winds blowing out of the valley included some big gusts that shook the car and lifted spray off the water.

Coming back up from the dock I saw the bunting flying around again. I wasn’t able to see where it ended up. I drove around the loop a couple of times without any luck, and decided to go back towards town.

The Gavan Hill ibuttons were overdue for a check. I parked at Pherson Street and went up to take care of them.


Considering how little I’ve been getting up hill over the past few months, I felt like I made pretty good time. I paused a couple of times to catch my breath on the way up, but completed the round trip in about an hour.

The forecast called for a fair bit of rain to come today. I decided to push back lunch.


I returned to the industrial park. Again it didn’t take long to initially spot the Snow Bunting again. It took off before I had a chance to park and watch it. It took several flights (with me attempting to locate where it landed, only to have it fly again) before it landed in a place that I could see it from the road and it was far enough back that it didn’t immediately fly off.


This time I parked and watched. It actively foraged along the ground, grabbing last year’s grass stems and pulling off seeds. Possibly it was eating seeds of other plants as well.

As I had hoped it might, it gradually came closer to the road. When I wasn’t moving, it seemed unconcerned with me in the car. When it skipped a little bit down the road behind me, I was able to back up very slowly without it taking off. I’m not sure if it had just gotten comfortable with the car, or if it just needed to be moving very slowly.

I was grateful no other cars came driving by while I was trying to get photos.


I spent more than a half an hour watching it feed, and getting what pictures I could in the dim light.

As I drove back in, a bit of rain started.

I made a stop at the park to check if a Hooded Merganser seen by the foot bridge might still be there. I didn’t find the merganser, but I did see a dipper upstream. It was my first of the year.

Today marked two complete years that I have at least one observation on iNaturalist each day. The last day I don’t have an observation was a busy gray January day. As I mentioned there, I had started thinking about getting photos each day. It was a bit later that I expanded that to an observation.