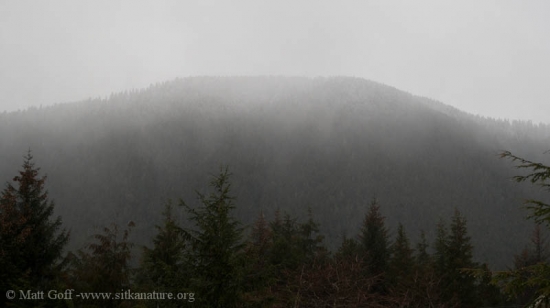 Rainfall was continuous today, though the intensity varied from moderate to heavy. All told, over an inch of it was recorded at the airport recording station. No doubt more fell in some of the wetter areas of town. Temperatures dropped slightly, falling into the upper 30s after spending the past several days in the 40s. The forecast is for continued cooling, with snow mixing in and then predominating over the next couple of days. As a result of today’s slightly cooler temperatures, the snow level dropped to the point where the top of Gavan Hill had snow covered trees. During my walking I only noticed a south wind blowing while I was down near the harbor. For some reason it didn’t seem to have much staying power across the land – at least not at ground level. The wind blown precipitation (snow at higher levels and rain lower, I imagine) or wispy clouds were being pushed along the slopes of Gavan Hill suggested there was plenty of action higher up, however.

My outside time today consisted primarily of a bit of walking around to visit the new house, downtown, and then over to Marge and Tedin’s to get the bird observations from last week. Swan Lake is still mostly iced over, though the open water is increasing in area. I saw 5 or more Ring-necked Ducks on the lake today – up a couple from previously. I also noticed 3 or 4 American Wigeons in open water toward the upper end of the lake. I took a short cut across the sedgy area at the very upper end of the lake flushing 8 Mallards who took off at my intrusion near their hangout. As they flew I was a little surprised to see a Pacific Wren pop out of a clump of last year’s sedges. Oddly silent (I would have expected some alarm chips at least), it landed in a nearby alder branch to take a size me up before flying on. It seemed a strange habitat for wrens – I’m much more used to seeing them in brushy and/or forested areas. While at Marge and Tedin’s, I was able to get some decent looks at the White-throated Sparrow that’s been splitting time between there and the feeders near Moller Park this winter. Would be nice to get more pictures of this species, but today wasn’t so great for that.

Of course there were many other bird sightings today, but the highlight of my day was probably the 10-15 (or more) Varied Thrushes with an equal number of Dark-eyed Juncos I watched for a few moments out my back window as they foraged in the backyard. I was standing up and getting things together to go when motion caught my eyes. I looked out back and didn’t see much, until I caught another little movement and saw a Varied Thrush hopping about. It didn’t take long to realize there were quite a view thrushes and juncos back there, and I was fascinated by how well they all blended in. The effect it created was that chunks of the ground itself were shifting about.

It’s easy to understand how juncos can blend in with their drab browns, grays, and blacks, but Varied Thrushes have such bright oranges that seem so boldly contrasted with the darker grays and blacks it seems like they should stand out. Instead, even when I was watching the bird as it stopped moving, it almost seemed to disappear against the background. With the whole backyard covered by a loose flock of these birds it was somewhat disconcerting to catch the movement in my peripheral vision only to see what at first glance appeared to be just the ground and ground cover. Only when the bird standing there moved again did it become obvious that it was there. The overall effect of the 20-30 birds scattered in the yard was a little unsettling since the ground isn’t supposed to move like that.