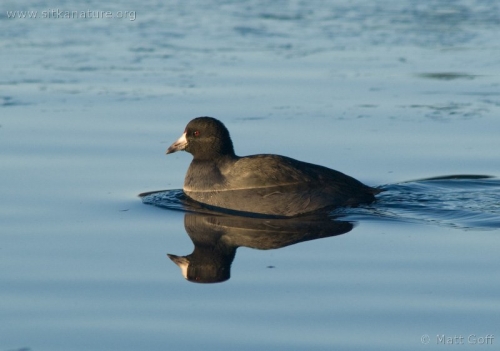 Sunday: (Photos)
Weather: It was overcast with just a few drops of precipitation through the day. Temperatures were in the 40s. Winds picked up in the afternoon, though it was not too windy around the house.

Birds: Connor saw the two warblers earlier this morning near the neighbor’s house, but not when he went outside again later.

At Swan Lake I saw 5 American Coots, the Cackling Goose, a female Bufflehead, Ring-necked Ducks, Scaup, and quite a few gulls.

Monday: (Photos)
I needed to get some consulting work done, so I did not spend too much time outside today. I did stop by Swan Lake for a few minutes after dropping Rowan off at preschool.
Weather: Mostly cloudy, with some rain showers. What little breeze I noticed around the house seemed to be coming from the Northwest.

Birds: At Swan Lake I saw 5 American Coots, a female Bufflehead, Scaup, Ring-necked Ducks, a Cackling Goose, a Double-crested Cormorant, and quite a few gulls. Most of the gulls appeared to be Glaucous-winged Gulls, a few were Thayer’s Gulls, and I saw one that I think was probably a third cycle Herring Gull.

It was quiet around the house when I got back from dropping off Rowan. I walked around the neighborhood a little bit and did not see any birds. However, later in the day I noticed the juncos were out in the backyard.

Tuesday:
Another day spent mostly inside. I spent a few minutes at Swan Lake after dropping Rowan off at preschool.

Weather: Overcast with temperatures in the low 40s during the day. There were a few breaks in the clouds and winds seemed to be calm around town.

Birds: There did not seem to be quite as many birds at Swan Lake today. Most notably, there was not nearly the number of scaups. However, it may be that they were up at the end of the lake where I could not see them. I did see the Cackling Goose, 4 American Coots, Ring-necked Ducks (up towards the upper end), and some gulls (though not as many as yesterday).

Wednesday:
Rowan did not have preschool today, so I didn’t have an outing to drop her off. I probably would not have made it outside at all, if I had not caught sight out of the corner of my eye some birds flitting by outside the window. What I saw when I took a closer look was enough to get me outside to watch for a few minutes.

Weather: Overcast with little or no breeze around the house. No rain through the day. Temperatures around 40.

Birds: It was quiet most of the times I looked outside today, but this afternoon I did happen to catch the neighborhood juncos in the back yard. Among them I saw the pale colored individual.

Looking out the window, I saw the two Orange-crowned Warblers from earlier in the week. (I wonder if they will make it into December; it’s supposed to get below freezing later in the week, so I’m not sure how that might effect them.) However, what prompted me to go outside was a flash of much brighter yellow. Further observation from a better vantage point revealed a Wilson’s Warbler, unmistakable in bright yellow with the black cap.

Thursday: (Photos)
I took Rowan to preschool and picked her up again. I stopped by Swan Lake each time.

Weather: It was sunny today. There was little or no breeze. Heavy frost covered the ground this morning, though temperatures rose to near 40, and in the sun it actually felt fairly warm. Swan Lake was probably 75 percent covered in a thin layer of ice.

Birds: With all the ice on the lake, the birds were not so spread out. There were quite a few around the penninsula, including 5 American Coots, a Cackling Goose, two female Buffleheads, and three scaups. Most of the other birds, including many Mallards, Scaups, and at least a few Ring-necked Ducks were down in front of the radio station.

On the second trip to the lake I heard a call that didn’t seem so familiar. There was quite a bit of traffic, so I had trouble figuring the direction, but I did manage to catch sight of the bird as it started flying across the lake. Unfortunately, I did not get a very good look at it. I would guess it was some kind of warbler, however.

Friday: (Photos)
I had some errands to run this afternoon, so I kept an eye out for interesting birds while downtown and also stopped by Swan Lake. Connor and I went for a walk down to Totem Park around sunset (even on clear days it’s dark by a little after 4pm now).

Weather: Clear and calm around town. Temperataures probably reached the mid 30s or so around the house. There was a bit of a breeze that came up near sunset, but it looked like it was pretty windy up higher, as there appeared to be a fair amount of snow blowing off the mountains. Swan Lake was completely iced over except for a small spot near the inlet.

Birds: Most of the birds have left Swan Lake. There were a few gulls and Mallards, plus four American Coots and a Cackling Goose.

On the walk to Totem Park there were quite a few Mallards, Barrow’s Goldeneye, Harlequin Ducks, and Common Mergansers scattered not far off the west shore. At the end of the park there were a dozen or so Mew Gulls. In the estuary were quite a few Common Mergansers and Mallards. I also found a dead juvenile gull just off the estuary side trail. It was missing its head, but the body seemed to be intact.

Saturday:
I spent most of today inside, but took Connor and Rowan over to check the mail at the post office. On the way home we went by the Alaska Raptor Center to take a look at the birds which stay outside. We also walked around the loop trail that goes along the river then over through the muskeg.

Weather: Clear and cool. Temperatures may have hit the lower 30s. There was a little bit of a breeze, but not too noticable until we got out of the woods near the post office.

Birds: Noticed some Dark-eyed Juncos around the house today. An American Dipper flew up river while we were crossing the in the park. We also saw a couple of Mallards in the river. There were Golden-crowned Kinglets along the Raptor Center trail. I also heard some finches, crossbills, I think. On the way home, I noticed a Varied Thrush in the woods near the bridge over Indian River. 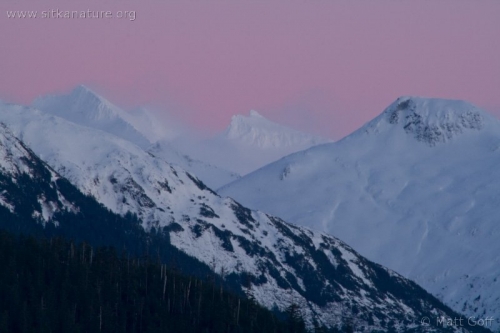