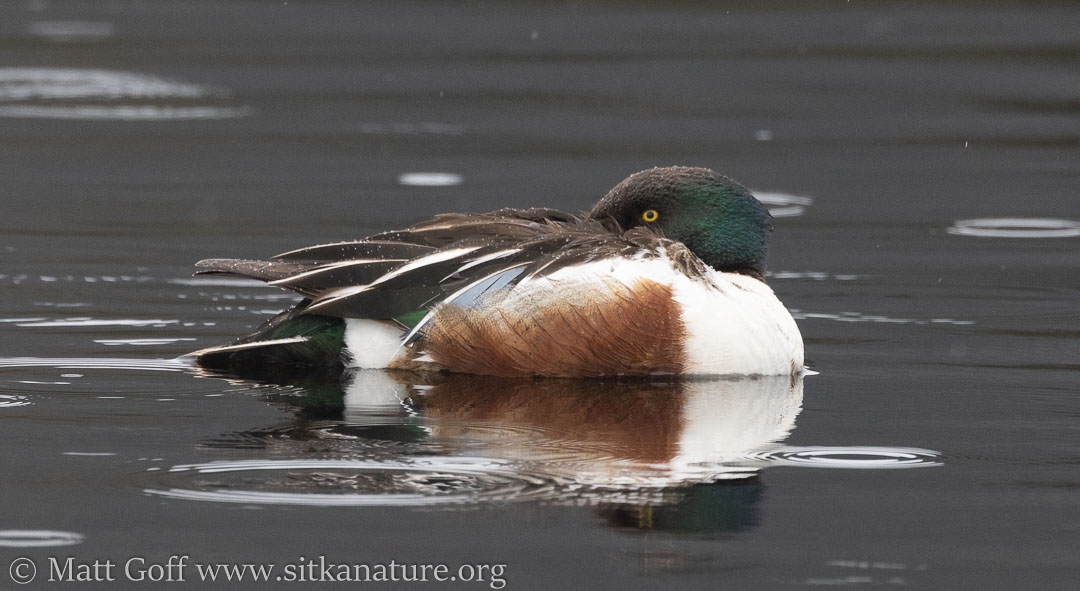 Overcast with light rain at times. The sun broke out for a bit later in the afternoon.

I walked to and around the park this morning.

On Park Street I heard what I think was a European Starling doing a very passable Fox Sparrow imitation. Unfortunately, I wasn’t able to get my recorder out fast enough to record the full song imitations.

The tide was falling, but was not very low yet when I arrived.

Rock Sandpipers with a Surfbird and a Black Turnstone.


Hundreds of Surfbirds and Black Turnstones roamed the shoreline out near the end. I estimated at least 20 Rock Sandpipers in the mix and quite likely more.

One Greater Yellowlegs worked the riverside, but I did not spot any other shorebirds.

After the park I walked to Swan Lake.

Perched on a utility wire along DeGroff street, a Dark-eyed Junco sounded like it needed to be reset.
Swan Lake had two Northern Shovelers. The lone Trumpeter Swan remains.

I met up with Kitty and we went out to Starrigavan. It was quiet there on our walk around the estuary.

I would have guessed these were steelhead, but someone there fishing said there were both steelhead and dolly varden swimming around.


A couple of people were fishing right below the road/footpath bridge. Looking down into the water we could see several fish. They appeared to be the size of chum salmon, and distinctly larger than pink salmon. I would have guessed they were steelhead, but the person fishing said there was both steelhead and dolly varden.


Later we went to Green Lake road and walked about a mile out. Lots of bees were buzzing about. Some of the plants showed freezing damage.


Things seemed to be greener out here than I’ve noticed elsewhere. It’s making me think I should get ibuttons set up out this way.
I ended up hearing/seeing two or three Rufous Hummingbirds, including one that perched long enough for me to get a photo.

I was going to rest at home, but got a message about a Sandhill Crane at Starrigavan.

It was just a flyover, and had apparently headed towards golf course, so I decided to head out and take a look.

I looked at golf course and didn’t see anything, so went down to Halibut Point Rec.

The sun was out and it felt pleasant on the beach without any significant wind.

I saw some shorebirds and decided to see what they were. I got to where I could just tell they appeared to be Surfbirds and Black Turnstones only to have them all take off.

The Peregrine Falcon went after shorebirds, but did not have success on this occasion


A Peregrine Falcon streaked by in pursuit. It gave chase briefly before pealing off and flying away without success (at leat as far as I could tell).

I went back up to the golf course and walked to the pond.

How many would you guess are in this flock?


On my way I heard geese calling. It took me a while to find them in the sky (they may have been behind a cloud), but finally saw a flock of hundreds high up.

As I was approaching the pond I heard a frog (maybe two) croak a few times. Then they went quiet.

I did see one Orange-crowned Warbler.

Ultimate this evening had enough people to play six on six for much of the time.