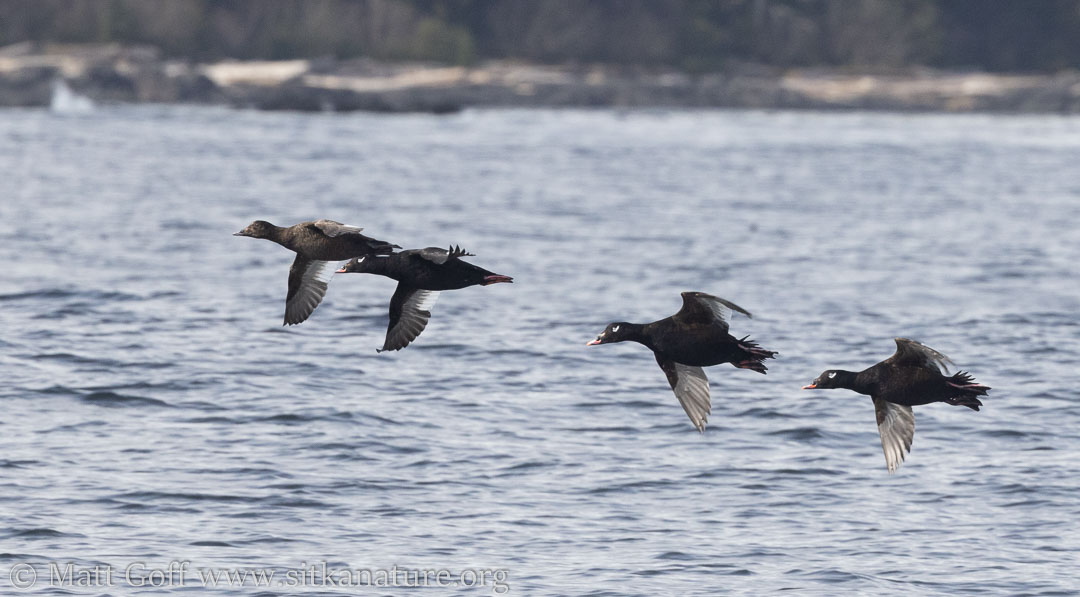 Partly cloudy and calm. The official temperature topped out at 49F, the warmest it’s been since last Sunday.


I spent the middle part of the day on a boat trip with a short stop at Point Brown.

I got picked up at the work float and we went through the channel.

Only a few cormorants were on the rocks by Kasiana and Middle Islands. We paused to look, but did not see any Brandt’s Cormorants.

Plenty of Harlequin Ducks, as I’ve seen previously this time of year. I’m assuming they are pausing on migration to nesting grounds. We do have plenty that winter in the area, but it seems like numbers are higher this time of year.


Hundreds of Surf and White-winged Scoters outside of Crow Island. They took off before we were anywhere near them, and since I already saw a Black Scoter this year, I was less motivated to work at trying to identify all the birds I could.


The tide was up enough that bird viewing wasn’t great in Port Krestof. Pigeon Guillemots were on the water and there were four Trumpeter Swans near or on shore. I saw Canada Geese, Mallards, and I heard Green-winged Teal. I’m sure there were more species, but couldn’t say which ones.
We walked the beach down by someone of the cliffs along Point Brown. Hundreds of gulls were hanging out, but I didn’t spot any obviously different looking ones. I also didn’t work to try and see if there might be a California Gull in the mix. 6 or 7 Greater Yellowlegs were the only shorebirds of the day.

Kitty gathered some herring eggs for her garden. There were plenty that had washed up, and I suspect she wished she had brought more buckets.

I will need to look at this liverwort with a microscope to try and figure out which species of Frullania.


I picked up a couple of Frullania collections. I’m going to need to take a closer look to see if either might be F. franciscana.

I also picked up a smaller dark liverwort. Long strands, but very thin, almost hair-like to the naked eye. I think it might be the same species I found on Chaicheis last year, but haven’t yet followed up on.

Green-up has yet to come along the Point Brown shoreline


Plants were only just starting to come up a little bit, so there wasn’t much fresh green.

I did see my first Savannah Sparrow of the year.

On our return, we followed the Kruzof shoreline most of the way to Shoals Point.


There were many Gray Whales starting from Kamenoi Point beach and peaking in numbers out by Shoals Point. There were 20+ spouts visible at a time in that area.

Brant on the water, Annahootz mountain rising in the distance


We saw Bonaparte’s Gulls, Rhinoceros Auklets, and Brant, each of which were new for me for the year.

Dozens of loons were in a loose group. All the ones I saw appeared to be Pacific Loons. I later saw someone reported a Yellow-billed Loon from the area on ebird. I was a little bummed to have missed it.

We looped around through the middle part of the sound, but did not see much there.

Swell breaking on approach to the Inner Point shoreline


The waters had been glassy near Kruzof, but there was a small chop on the way back. A long period swell also seemed more noticeable. I was aware of it before because, despite the calm conditions, sizable waves lifted and broke at Inner Point.

Ultimate had a reasonably good turnout this evening. We had the lights, but probably will not need them for much longer.