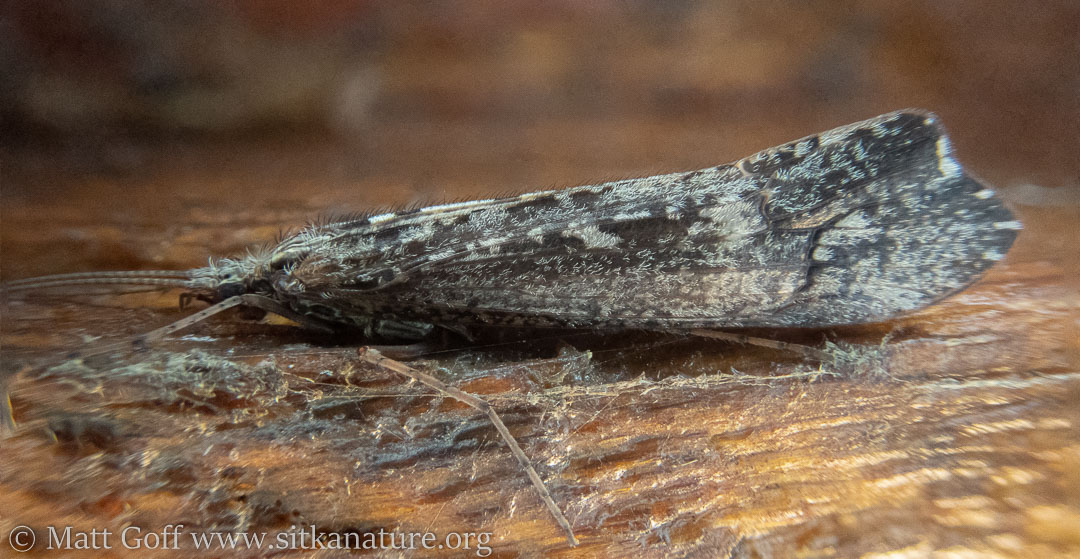 I think this is an ascomycete, but as yet don't have a name for it. It's growing from spruce bark.

Calm winds with temperatures in the 40s dropping to the 30s under clear skies later in the evening.

I spent a good chunk of the day working to make sure my websites were running properly. There were a couple of things I needed to fix, and a couple of mystery issues, but by this evening everything seemed squared away.

I went for a drive early this afternoon to check out a couple of places and make a stop at the grocery store.

Gulls on the roof of one of the seafood processing plants


KJ reported a Slaty-backed Gull near Middle Island yesterday, so I wanted to check gulls around town in case it sticks around. There were a few gulls at the channel, and others on the roof of the seafood processor. I didn’t find the Slaty-backed Gull among them.

The tide was up fairly high at Starrigavan and I didn’t see many gulls there, so I didn’t stop to take a closer look.

With any luck the Slaty-backed Gull will stick around for a couple more days and show up in the concentrations of gulls that will be here once black cod processing begins later in the week.

I spent some time sitting and then poking around in the yard after returning home.

My practice of sensory awareness and integration went okay. It’s easy to want to tune out a bit because of the traffic noise. I’ll either need to work through that, do it early in the morning, or go somewhere else for the sense practicing.

One of the reasons I tend not to spend much time in my yard is I end up seeing things I would rather were different. That ends up feeling like stuff I should do, and I don’t really want to do those things.

I'm not entirely sure, but I think this is Othotrichum consimile because it has hairy calyptra that appear to cover the entire capsule. (the hairy orange-brown pointy bits that stick out a bit from the clump.)


Today I poked around a bit anyway. I did see a few things that should probably be taken care, but mostly tried to look for various neighbors as I might in other locations. I made note of a couple mosses on one of my trees.


I also found a hole/tunnel going into the dirt near the bird feeder. I suspect it was made by the rat I saw earlier in the winter. I didn’t try to determine if it’s been used recently.

Common Shiny Woodlouse (Oniscus asellus), an introduced but common species around my yard. (I'm not sure how far they make it into undeveloped areas, if at all.)


I turned over a planter thing that’s been sitting on gravel by the house for months (and maybe more than a year). It was apparently shelter (presumably from winter) for several slugs, a couple of weevils, and a couple of sow bugs. I wouldn’t think it was thick enough to have kept them from freezing during the really cold weather in December and early January, but maybe they burrowed down into the rocks. Or perhaps they can tolerate a bit of freezing.

New growth on raspberriy plants in my yard. Hopefully there won't be a hard freeze in the coming weeks.


Along those lines, it’s supposed to get down a bit below freezing the next couple of days. Some of my raspberries, the honeysuckle, and the earlier honeyberry bushes have young leaves out of the buds. Hopefully it’s not so cold to kill them back.

Ultimate this evening had a good turnout for our first time at our new 7pm start time. The group of folks who showed up was easily the most experienced on average that I’ve played with for a long time. It made for a different style of game. Frost began to form on the field while we were playing, and my windows had iced up by the time we were done.

Until I looked at these under magnification, I didn't realize they were each in little pairs


Later this evening I did some microscope work on a couple of fungi I collected over the weekend. I’m not sure what either are, but hopefully will be able to get some help putting a name on them.