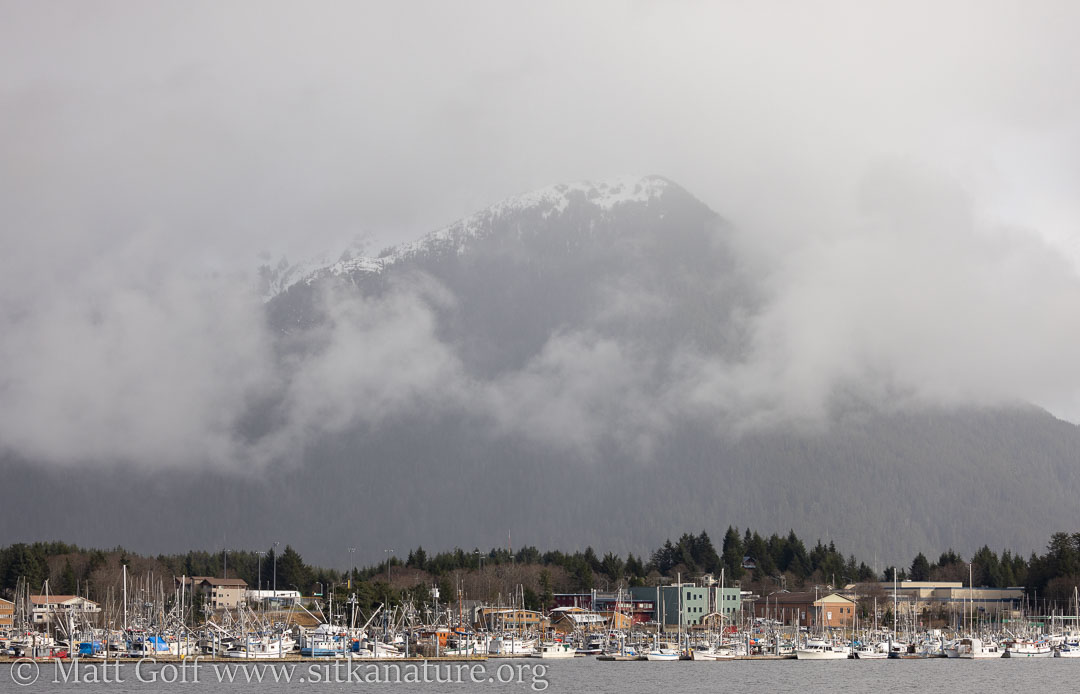 Some of the 100+ Long-tailed Ducks wintering in the channel

Cloudy with occasional rain. Calm winds this morning, with a light north wind this afternoon.

Due to calls, I was scheduled to do observing for an hour this morning, then come back for four hours in the afternoon. (Contrary to plans, I was late to both calls, in part because of trying to work around the calls.)


Conditions were very still this morning during my time. I didn’t have my camera out, but would have liked to take a picture of a Pelagic Cormorant with white patches already developed as it flew over the mirror smooth water.

Rainbow in front of Gavan Hill


When I returned this afternoon, the wind had picked up. While I watched, I could see light showers in the area. For the better part of an hour, one of them fell on us.

As it turned out, they were done with the in water work on the drill hole they were working on before I was scheduled to be done. They would no drill anymore, however before they could drop me off, they needed to move the boat to its new location. This ended up taking a couple hours, so I was there an hour and a half longer than planned.

I did get an opportunity to chat with the folks working on the project, which I found interesting.

I was told the rock coming up in the core they were drilling was particularly fractured. Core pieces were put into boxes for storage and transportation.


They drilled pretty deep into the bedrock because of how fractured they found it. I could see some of the cores they had pulled out. According to the main geologist, it’s all graywacke (as I had guessed).

It turns out he has spent time in various places around Southeast Alaska, including Red Bluff Bay an the ultramafic area at Patterson Bay (which I’ve not been to, but would like to visit).

This Sea Lion came close enough to cause a brief pause in operations.


I did get to log a couple of mammal sightings today. A sea lion popped up briefly not too far from the boat, and as things were wrapping up, a seal came up in the same area.

Well outside the project area, Harbor Porpoise were hanging out between the breakwater, Kasiana Islands, and Battery Island this morning. Presumably there was food there for them, as I don’t usually see them staying in one area. (Someone on Sitka Chatters reported seeing them around Sandy Beach, I’m guessing part of the same group.)