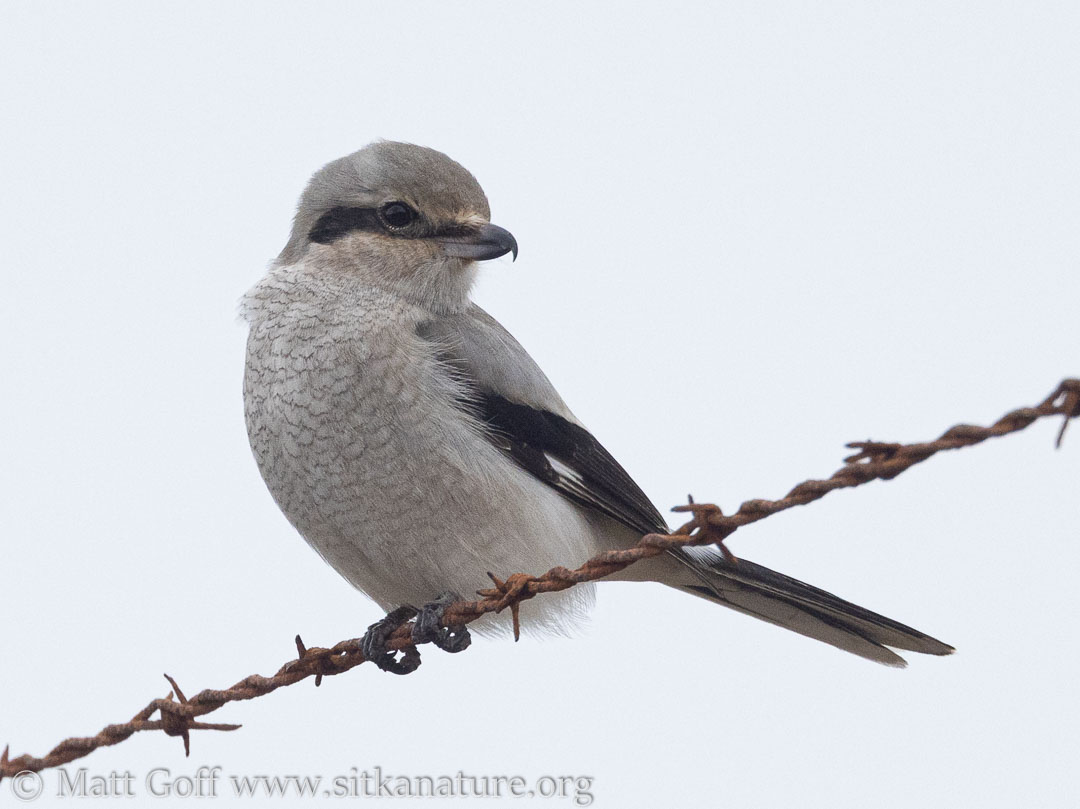 Overcast and breezy. The forecast rain mostly didn’t show up in town. Radar imagery showed it was falling offshore. We did see a bit of rain later this evening.
I had a brief meeting about upcoming observing work which will happen in the channel.

Before the meeting I went by the airport and saw the Northern Shrike along the fence line. I took a few pictures in the brief time I had.

I think this Northern Shrike was finding insects (possibly caterpillars?) on the ground. It definitely wasn't going after birds in its frequent forays to the ground from the fence.


Returning after my meeting, the shrike was still present. I followed it around a bit. While I watched, it mostly flew from place to place on the fence. Periodically it dropped down to the ground, but I was not able to see what it might have picked up. I’m guessing insects.
Another behavior I noticed today is how much it seems to pump its tail. At times it may have been done in part to help keep balance in the wind, but I think it was more than just that.

The white patches stood out to me as the Northern Shrike came into land.


I’m always hoping for better pictures, but today flashes of white on its wings, back, and tail as it was landing caught my attention. The high contrast pattern was striking, and I wanted to get pictures showing it.

It was not easy, as the bird mostly kept its distance from me. It also moved quickly, so even at a distance it was difficult to keep in frame.

I did manage one distant shot showing the pattern.

Gulls gathered, presumably for food, but I could not determine what they were finding


Coming back across the bridge, I saw a flock of gulls in the little cove on the town side.

Stopping to take a look, I mostly noticed Short-billed Gulls. There were also a few Common Mergansers and some other gulls as well.

Some gulls ventured up on the beach and seemed to be finding food there as well.


It appeared they were finding something to eat. They picked at the water repeatedly, and some came up on shore and picked at stuff as well. Whatever they were getting seemed small, since I never did see anything in their bills.

I went down to the peach and poked around briefly, but did not see anything that looked like it might be food.

Wigeons, including the Eurasian Wigeon were feeding on the peninsula at Swan Lake. I didn’t spot the Wood Duck, but suspect she was there somewhere. I didn’t count carefully, but it appeared there were 20 swans (up from the 18 I’ve counted the past couple of days).