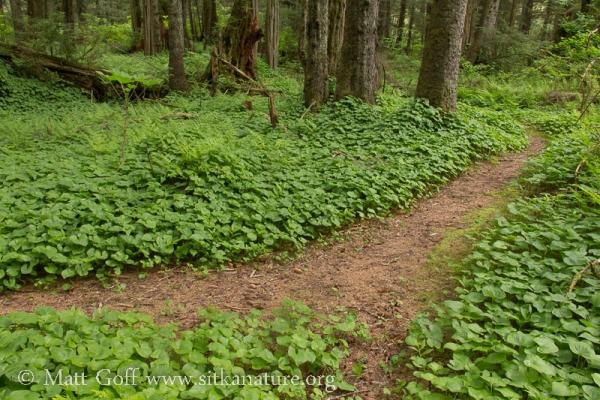 The marine stratus moved in early this morning, but burned off again by around 10am. Temperatures got up in the high 50s. There was a west wind through the afternoon and into the evening, but it didn’t seem very strong here at the house and died out pretty early.

On a walk around Totem Park this morning I was struck by just how thoroughly dearheart covers the ground in some parts of the forest. In other parts I was struck by (though didn’t try to photography) the various shades of green, darker green of deerheart, the lime green of oakferns (Gymnocarpium sp) primarily, with some other green shades mixed in as well.

Out on the flats I saw four Marbled Godwits and a (probably Short-billed) Dowitcher. I also noticed a small gull with a sort of black head. It was far enough away I didn’t get great looks, but so enough to think it was a young Bonaparte’s Gull. The photo I got confirmed it (and a second one, which I didn’t notice at the time, as I was focused on the one with the darker head wondering if it might be the Franklin’s Gull).

I got the last of the presumed iris that someone gave me planted in the yard this afternoon. Yesterday I finished up planting all of the strawberries.

I don’t remember where I picked them up (either Starrigavan Ridge or Blue Lake Creek), but I have a pot that has quite a few Arctic Yellow Violets (Viola biflora) coming up. I think I just started with a plant or two, but they’ve spread to the hole (small) pot. At some point I will transplant them into the yard. They’re much less common around here than the (abundant) Stream Violet (Viola glabella). In other collected-plants updates, the nagoon berries I got seem to be doing okay after getting moved this past year. Leaves are coming up bigger than last year, so perhaps they like the additional soil. The Alpine Astragalus seems to have spread a bit in the pot, so I moved one of the miniplants into a container with strawberries, and will see how it does there. The oxytropis also seems to be doing fine.

There was an article in the paper today about the bear I got pictures of last week being shot. It charged a trooper who was there waiting for the ADF&G wildlife guy to get there with the tazer. They were going to try to haze it to encourage it to leave, as it had been becoming more aggressive after being repeatedly bothered by people approaching too closely. It was sad; just a young female bear, probably her mother had been shot earlier in the year along the Forest and Muskeg Trail. It made me reflect on my own experience out there with the bear. While we certainly didn’t get close in the way that it sounded like other people did later, I still wonder if we contributed to the situation even as far back as we stayed. She certainly seemed aware of us, but continued eating. I have plenty of zoom with my 400mm lens, so there was no need to get especially close. At the time Connor really wanted to approach closer, so I read him the statement from the Fish and Game person (who gave a talk we went to a couple of weeks ago) and we had a little talk about some of the issues with approaching closer, even if the bear doesn’t respond with aggression at the time. 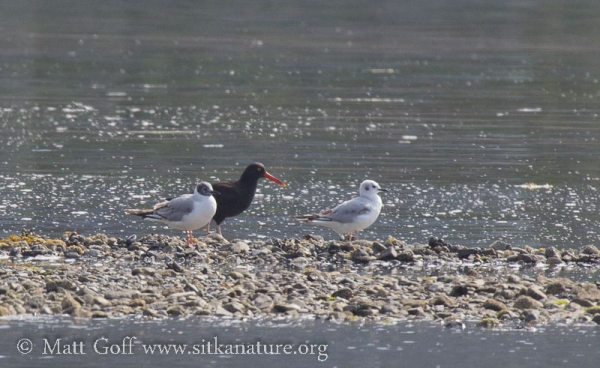