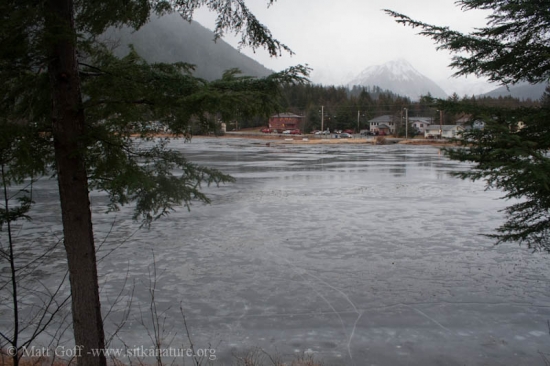 Although the clouds started moving over yesterday afternoon, there had been no rainfall by lunch today. For some reason I imagined it would continue to hold off when getting ready to head out and run some errands. Unsurprisingly, this did not turn out to be correct. From shortly after we left, gusting winds were pushing rain sideways. Fortunately for my comfort level, the rain never was very heavy while I was out in it. The winds were picking up through the day (with a wind advisory for this evening through tomorrow morning) – and it was interesting to see the hemlocks along Swan Lake only wet on the southeast facing side.

When I was walking up the sidewalk on the southwest side of Swan Lake this afternoon, I spotted a Ring-necked Duck in a small patch of open water. It was the first I’ve seen since the lake first froze a couple of months ago, and I will admit that my response was a bit of incredulous laughter. This species makes a habit of disappearing when Swan Lake freezes, but then showing up (in smaller numbers) when there is open water. Other birds leave the lake when it freezes, only to come back when it thaws again, but the difference is the Ring-necked Ducks are not generally seen anywhere else around town. It occurred to me today that perhaps the birds here before the first freeze actually move out of the area entirely, and the few that show up when the lake thaws may have come from somewhere else, not necessarily the local area. Still, this would imply a fair amount of movement during the winter, and it’s not clear to me what advantage they may gain from doing that.