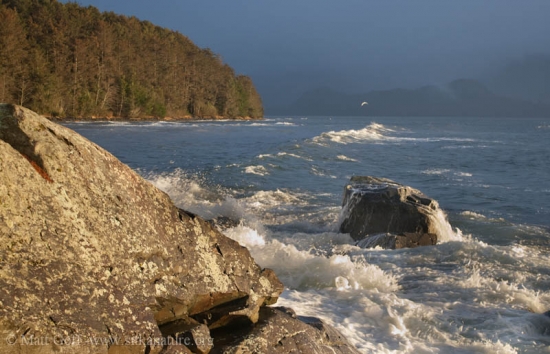 Just as I arrived down at the water, a break in the clouds to the southwest allowed the sun to break through and illuminate she shoreline from the rocks where I was standing over to the forest standing above the beach at Totem Park. The direct light did not last for long, but its warm tones highlighted the rocks and trees on the beach, as well as the white foam at the edge of the water where the pulsing waves thrown up by the brisk SW wind were breaking apart on the large boulders only partially covered by the high tide. Offsetting these warm tones were the darker blues and grays in the background, where waters reflected the heavy overcast still blocking the sun, as it had for most of the day.