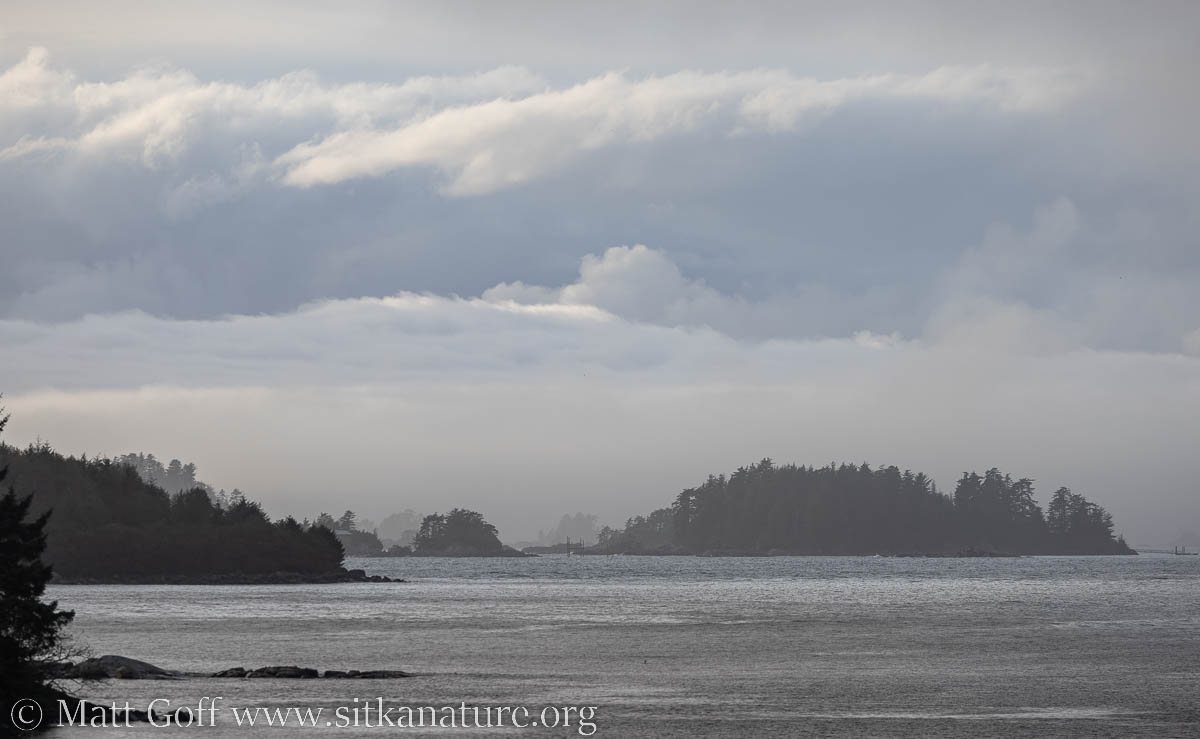 Overcast, becoming partly cloudy with a fair bit of sun. Temperatures into the lower 60s (will likely set a record for the date).

I took my time getting going this morning.

By the time I stepped out midmorning, it felt quite warm.

I waited until nearly noon before heading out beyond my porch.

I was hoping to walk the Estuary Life trail, but wasn’t sure if it was open (it was).

Other than a couple of Pacific Wrens, it seemed quiet at the upper end of the estuary. Usually when I pish, Song Sparrows (and maybe other species as well) pop out of the thickets and estuary meadow grass in response. Not today.

Rather than completing the loop right away, I walked down to the beach on the bayside.

While relaxing on the beach I heard a flock of geese approaching. They appeared over the forest on their way south. As best I can tell they were all Canada Geese.

I walked back on the road, then made another side trip. This time I walked the hike in camping area loop. I’m curious how often folks camp here. I’ve only walked it in the off-season, so it’s not really a surprise that I’ve not seen any occupied campsites.

Good-sized flocks Harlequin Ducks, Surf Scoters, and Barrow’s Goldeneye were all out on the bay (among a few other scattered water birds).

Some of the Harlequins were repeatedly diving in the river current just out from the bridge. I’m curious what they were going for, but I didn’t see.

Most of them had moved off when I started showing interest, but three stuck around. I had timed my movements to coincide with their time underwater and made it to the rocks between the (submerged) beach and the road. They popped up and on their next dive were barely under the water before they were out again and flying away.

I didn’t think it was me (otherwise, why would they have bothered to dive?), but wasn’t sure what might have spooked them. Moments later I think I got my answer when a seal surfaced where the ducks had been diving.

The margin between Nelson logging road section of the trail and the estuary had several species of fungus that caught my attention.


Among them was a club-like fungus that I’ve not seen before, and a birds-nest fungus I’ve only seen once before.

Upon my return to town I went by Castle Hill.

I spotted at least a couple of Yellow Warblers and one Yellow-rumped Warbler working the maples and other vegetation.

I also was able to observe a Golden-crowned Kinglet bathing in a small trickle coming down the hill. Later I saw a Yellow Warbler visiting the same place – though perhaps just to get a drink of water.


Once again there were many flies basking in the sun. Some on leaves, and others on the cement and stone work.

This Yellow Warbler caught a fly to eat

I saw a Yellow Warbler eating one of the flies, so maybe they’re part of the reason the warblers were at the hill. (Incidentally some years ago I saw Yellow Warbler tracking a fly like this one was eating – at the time I didn’t really consider that might be able to catch and eat them. Now I guess I know better.)

The weather was pleasant so I put off returning home and went over to Japonski Island.

The gulls present in the channel were scattered mostly towards the south end, and there weren’t so many of them. I did scan them, but didn’t see anything that stuck out to me.

I watched at the airport and didn’t see much there either.

Looking northwest beyond the channel


My last stop was the parking lot that looks over the north end of the channel.

I heard Common Loons calling and saw a handful of them. I also spotted a Rhinoceros Auklet inside the breakwater.