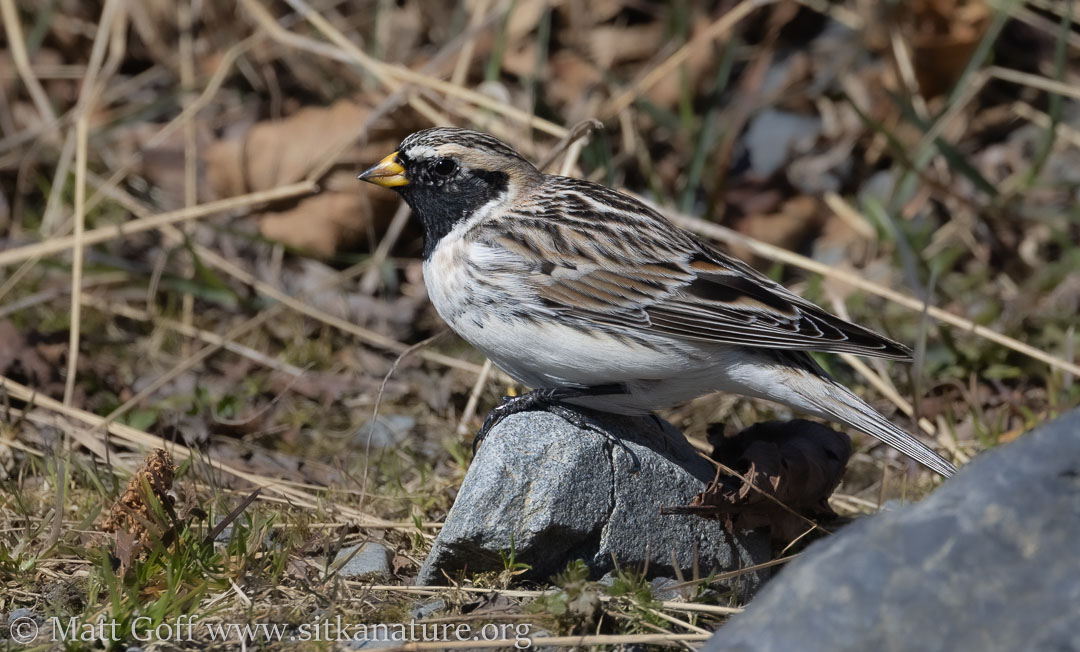 Continuing clear, cool, and breezy. Less breezy and a little warmer than yesterday, however.

Today was tax day for me, which took up most of my morning.


After finishing those, I went over to the airport. I saw a lone male Lapland Longspur along old airport road. It was reasonably cooperative as I watched, and eventually flew over the berm. Although I only saw the one, 30 were reported from the airport, so presumably the flock was elsewhere.

I noticed the smell of mud again. Maybe it has to do with brackish water in part, as I noticed along Indian River by the estuary later.

Other than the longspur, while walking the road to the old long-term parking area, I didn’t notice too much else in the way of birds.

There are some feral raspberry plants growing along the old road, with salmonberry thickets a bit further off. I wondered (perhaps not for the first time) why the salmonberries haven’t taken over.

Walking back, I noticed a Song Sparrow flying up while calling or singing (I can’t remember for sure) and fluttering its wings before dropping back to the fence where it had taken off from. I’m guessing it was part of a courtship display, but I’m not sure.

With my attention directed that way, a snipe apparently became uncomfortable and moved in the vegetation below where the Song Sparrow landed. I didn’t realize it was a snipe at first.

I followed it and got a couple more brief looks, enough to see that it was a snipe. I was not able to get pictures, however. Eventually it flew up the ditch where I chose not to try and follow.

I did notice an area of moss and grass large enough for me to sit down in. I relaxed there and enjoyed the warmth of the sun for a few minutes.


From there I went to the park and walked around. It was calm along the beach until I got out near the point, where it became exposed to the wind.

Some gulls were loafing out on the points of exposed beach, ducks and three Greater Yellowlegs were working the shoreline and shallows out in front of Merrill Rock. Given the number of birds there, I suspect that’s about the only place herring spawned along the park this year.

I got a message from DK about a Snow Goose at the golf course, so made my way back to my car.

On my way, I checked and did not find flowers on Osmorhiza or violets.


I found the Snow Goose in the pond where it had been reported. Two Mallards were there as well. I’m not sure if this is one that got left behind by a migrating flock, or if it wintered by itself north than most.

I took a look at Starrigavan. It had fewer ducks than previous visits from what I could see (at least on estuary side).

I stopped at Halibut Point Rec and watched the mouth of Granite Creek.

This location the breeze was fairly light and I sat just above the shoreline and watched.

I did not spot any Bonaparte’s Gulls among the 100 or so that were on the beach. There were some dabbling ducks, mostly Mallards with at least one Northern Pintail.

I’ve fallen further behind on publishing photojournal entries, so I worked on that this evening.