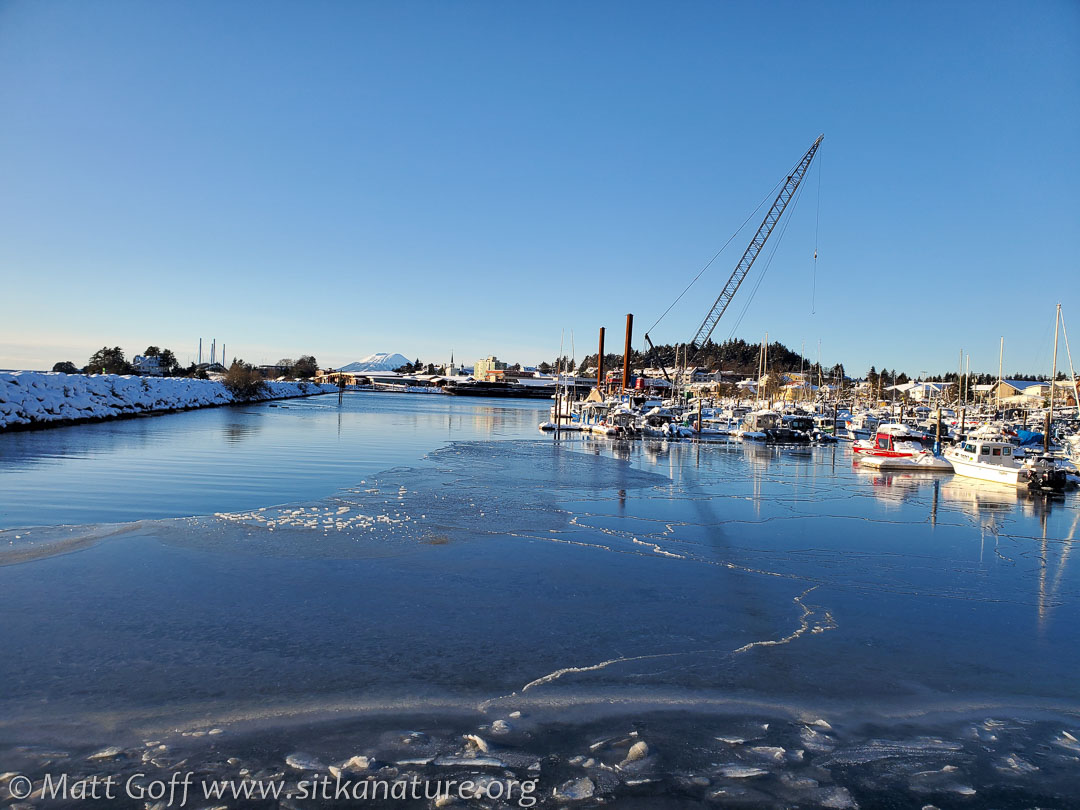 Cold and clear, as forecast with winds even less than yesterday, as far as I could tell. Official low was only 16F, but I think it was probably colder than that at my house. (My car certainly thought so, with a temperature reading of single digits when I went to do MMO work at Crescent Harbor).

Today was my second shift of observing – this time I spent most of the time in my car watching from the small Lincoln Street parking lot across from Betty Eliason Childcare Center.

Once again, no mammals. There was some ice in the harbor, but not a lot, especially considering the very cold temperatures. With the full moon tide series (a -3.0 at 8pm tonight, with atmospheric assist of about -1ft), I wonder if maybe the water is getting mixed more, and that makes the surface less likely to freeze.

Harbor ice turned out to not be the only cold question of the day. 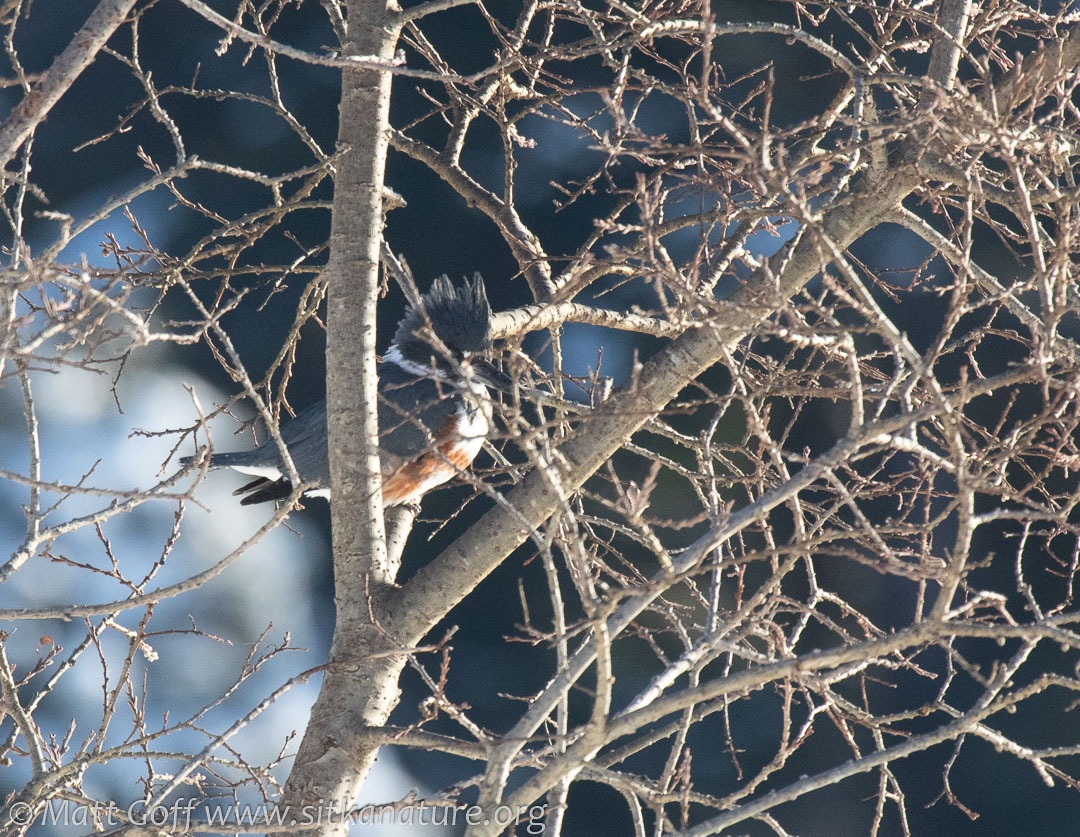 While spending 3+ hours watching from my car (I walked the seawalk out to the breakwater during my final 30 minutes) – I had a chance to see a Belted Kingfisher repeatedly moving along the shoreline. It seemed disturbed by pretty much everyone who walked by, flying 50 yards or so further down as they approached, only to take off a minute later when they had closed the gap. It did this in both directions, depending on which way pedestrians were going, periodically making a bigger flight reversing several of its hops, and beginning again.

A couple of times it landed right near where I could see it well, but I was never able to get my camera out before it took off again upon the approach of the pedestrian.

It makes me wonder why it keeps using that shoreline – it seems like there must be other places where it would be less disturbed. I guess they may fly around from perch to perch fairly often anyway, so it’s not a big deal.

I considered going to look for the green flash later in the afternoon, but could see a fair number of clouds off to the west, so decided not to.

I made good progress on making sure 2016-Q2 photos are in iNatuarlist, and with similar progress in the coming days, should be on to Q3 by next week.

I noticed the GoogleMaps imagery on iNaturalist is pretty recent for the downtown area of Sitka, and ended up going down a rabbit hole trying to figure out when it was taken. I figured out it was almost certainly a Sunday (based school parking lots empty, and church parking lots with cars), around mid-morning (based on the direction of shadows). It was from 2019, as it appeared the sidewalk near my house had been redone, and the house on the corner of Park and Etolin was torn down. I don’t remember anything specific about the dates of the sidewalk or house demolition other than late summer at the earliest. This is consistent with presence of many gulls at the park, and the color of vegetation in the estuary, as well as on Verstovia (which apperaed to be the same image). So, I figured a Sunday in August or September. The tide at the park seemed to be relatively high, which basically ruled out every other Sunday, and the weather was obviously clear, so that narrowed things down further. In the end, I decided the most plausible days were August 11th or September 15th. Later, I looked at Google Earth (where the imagery date is displayed), and found it was from September 14-15th (hard to get the exact timing, in part due to time zone issues). 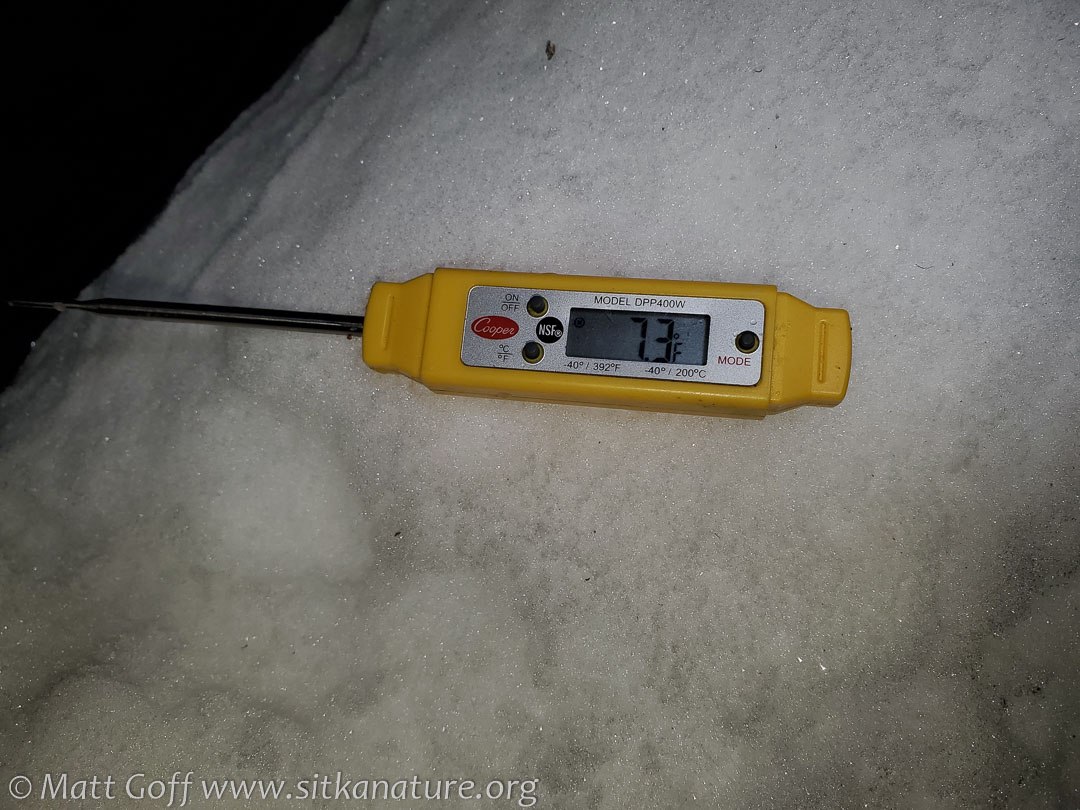 Kitty had asked me earlier how cold it was at my house, so I decided to take my thermometer outside and see. The airport weather had 14F, but on my upper deck rail, the thermometer showed 8F, without even taking the cap off. Realizing it was probably colder closer to the ground, I placed it on the snow on a planter (so a couple of feet off the ground), and once it settled, it read 0.8F. This was a bigger difference than I had expected (both from the airport, and from the deck rail), so I decided to try the deck rail again (this time without the cap on). After a few minutes, it seemed to settle on about 7F. 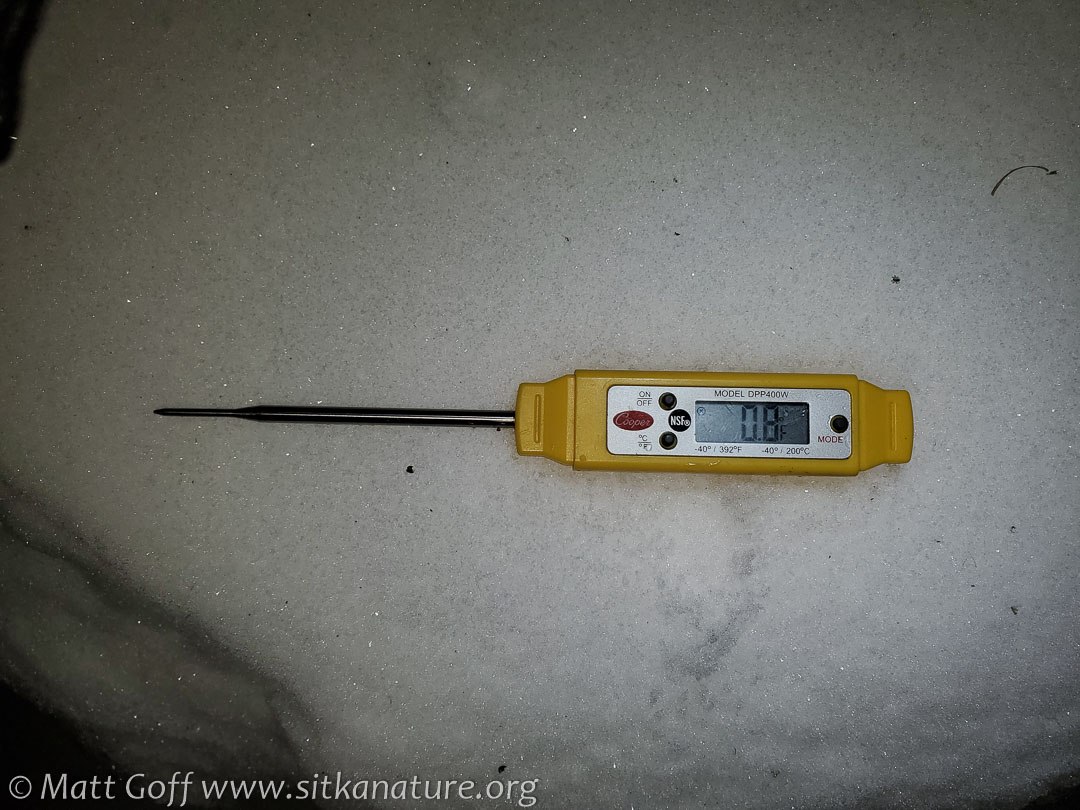 A nearly 7 degree difference over 15 feet or so of height, was more than I would have guessed, so I became curious what temperature it was right at ground level.

I had been going outside with barefeet to this point. It was interesting to feel the melted snow on the bottom of my feet freeze on the exterior door jam, almost like touching my tongue to a cold piece of metal. I decided for further investigations it would be worth wearing shoes. 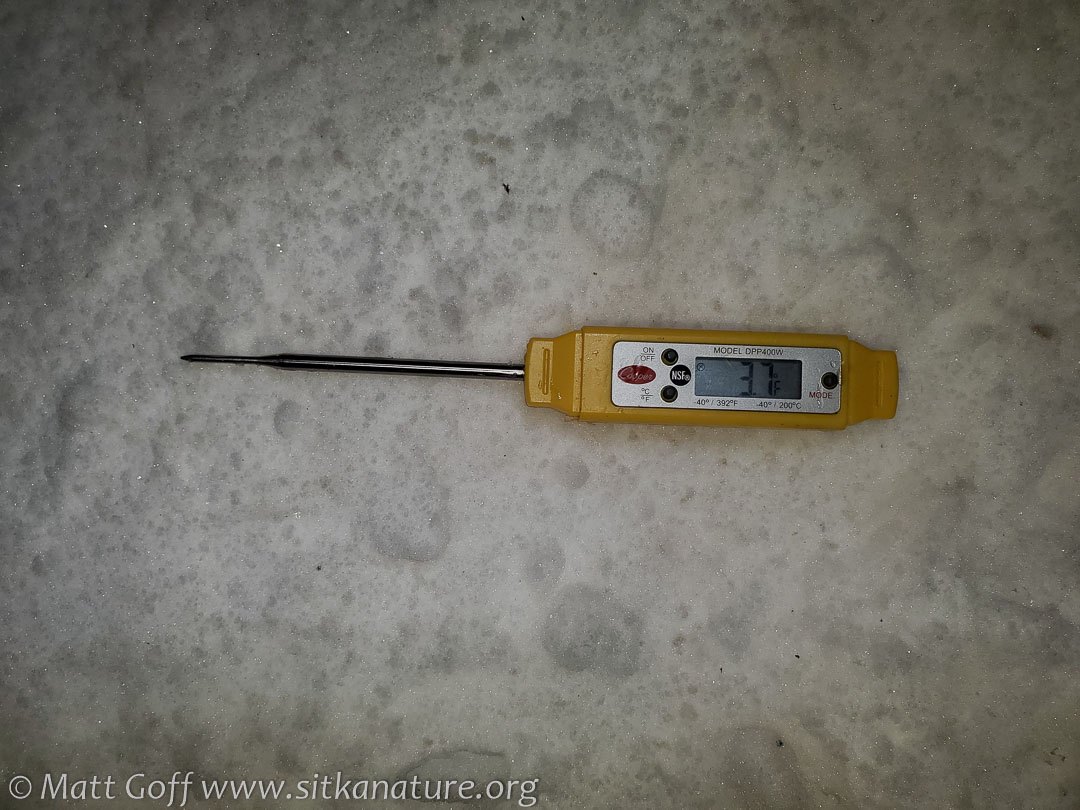 I chose the compacted snow at the edge of Park Street and was surprised to see the thermometer settle in around 4F. Definitely colder than the deck rail, but not as cold as a couple of feet off the ground. 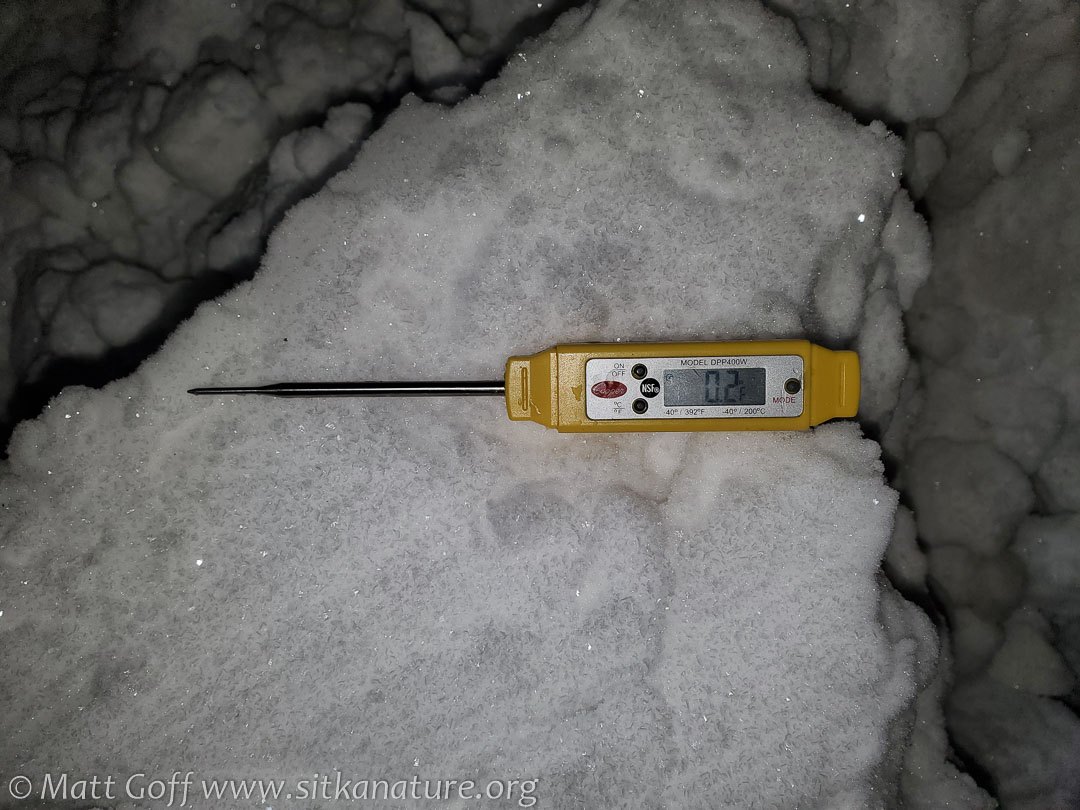 I put the thermometer on a nearby pile of snow a couple feet off the ground, and got a reading of 0.7F. This seemed strange, so I went back and forth a couple more times between the ground and the snow pile. The ground was consistenly 2-3 degrees warmer than the snow pile (which went to 0.2F a few minutes after the 0.7F reading).

I’m not entirely sure what to make of the temperatures – perhaps there’s enough heat in the ground to make it a little bit warmer?

While I was out, one of the times, I heard a Varied Thrush or two chup that sounded like they may have been spending the night in the large spruce tree between my southern neighbors. 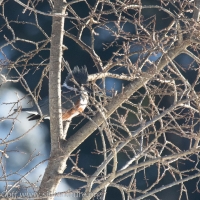 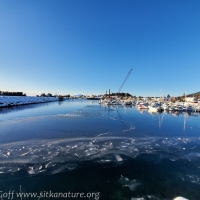 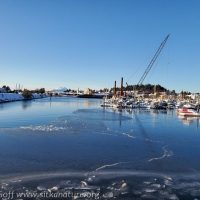 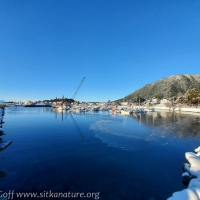 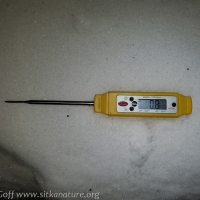 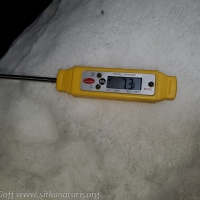 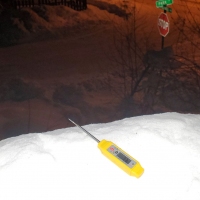 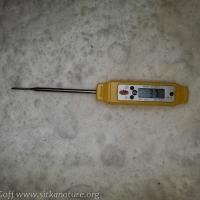 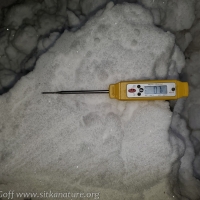 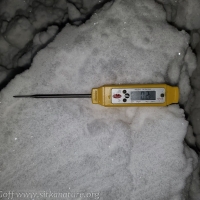