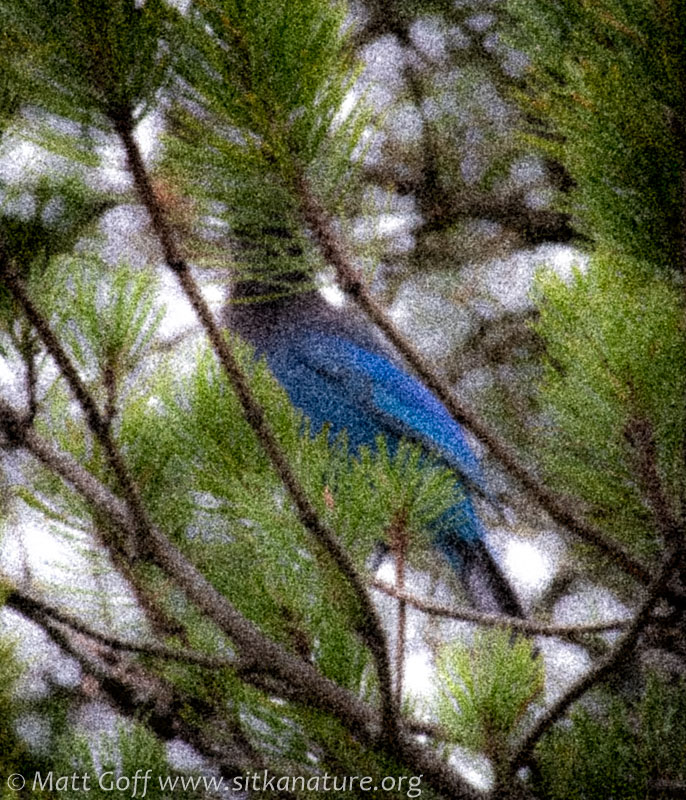 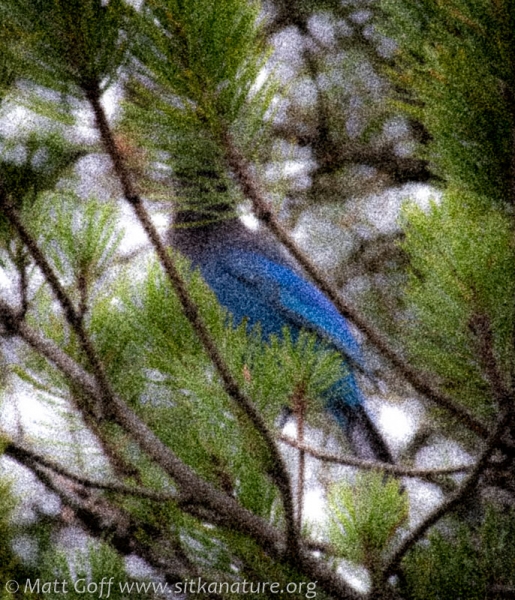 With a forecast for rain, and the radar showing heavy rain offshore that appeared to be moving towards town, and I have been feeling a little bit off (maybe fighting illness), it seemed like a good day to get caught up on email and other various tasks that I fell behind on back in September when trying to take advantage of the sunny weather (and didn’t catch up on in October or November because I spent too much time chasing rare birds).

This morning I heard a Steller’s Jay calling out in the yard (or somewhere nearby), and as that’s one of the species I hadn’t yet photographed and put into iNaturalist for the year, I went out to try and get pictures. It didn’t really cooperate for a nice portrait, but I fortunately it doesn’t take much for a Steller’s Jay picture to be identifiable. Since it wasn’t a good photo to start with, I decided to play around with the noise and sharpness to give it a different sort of feel.

Connor told me there was frost first thing this morning, but by the time I was up and about, clouds had rolled in more fully and the temperatures had warmed enough to melt the frost. Connor also told me he saw two Palm Warblers and a Wilson’s Warbler in the neighborhood – they’ve been around for several days at least (and the Wilson’s Warbler a couple of weeks, or so).

Rowan and I went to see a movie this afternoon, and were a little surprised that the rain still hadn’t started when we got out around 3:30pm. It did finally start raining a bit a little later, but it seems the heavy rain stayed offshore.

I did get my email inbox trimmed down to under 15 (which is where I like to keep it), and made good progress getting photos from the last quarter of 2013 into iNaturalist. (I’ve been working on getting all my photos which could reasonably serve as iNaturalist observations added to iNaturalist. I didn’t start using iNaturalist extensively until 2017, so most photos from 2017-2018 were added as I went. In the backlog going back to the 1990s I’ve completed everything up through 2012, and am almost done with 2013. I’m hoping to get through 2014-2016 this winter.)