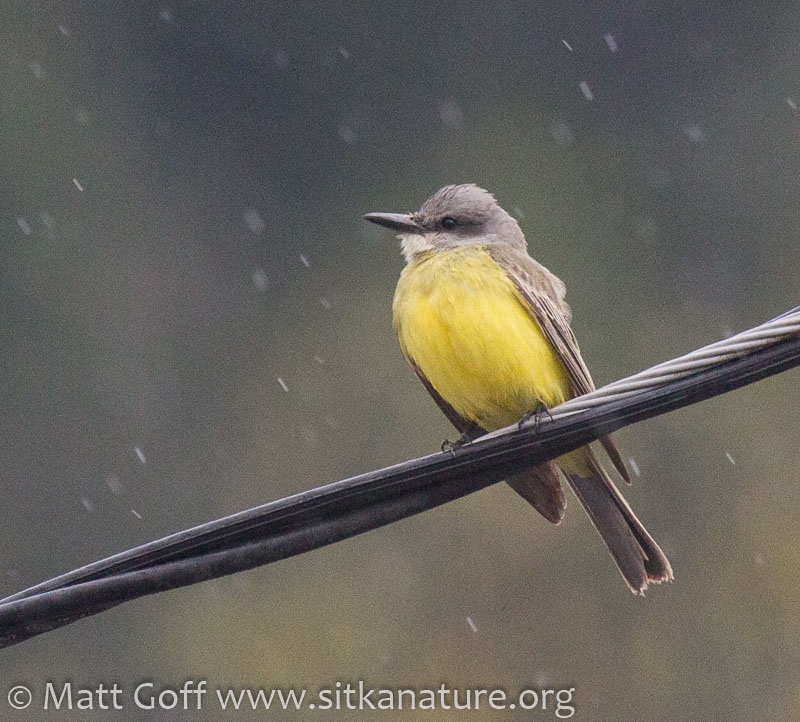 Update: The bird is still here on Thursday, 20 October. (Given the rarity of this species in Alaska, I’ll try to post an update each day the bird is seen.)

On Monday, Marge W. called me to let me know that Brownie T. had been seen a flycatcher with a yellow belly and yellow under the wings in front of her house (which is not far from Halibut Point Recreation area). It had been around on Sunday afternoon into the evening, but with the AT&T cell tower having trouble, neither Marge nor Brownie had been able to get in touch with me about going out to try and get some photos. In the initial conversations, the subject of size had never come up, so I think we were all thinking in terms of a Pacific-slope Flycatcher that was late, or maybe a Yellow-bellied Flycatcher – either way, it would be a good bird to document.

I got a call from Brownie this morning letting me know that after not seeing it at all yesterday, the bird was back where it had been (hanging around on her deck and nearby trees and shrubs). By the time I got out there, she said it had gone, but I was welcome to stay and watch. I walked around the side of the house to the waterfront and, as I arrived, I saw a bird fly across in front of me out over the water moving parallel to the shore. It did not fly in a way I’m used to seeing, so I wondered if it was the bird I was looking for. Lighting was not great, it was moving quickly, and I didn’t have my binoculars out soon enough, so I only had impressions of size and flight pattern as I watched it go a ways down the beach and land in the top of a tall spruce tree.

My sense was the bird I saw approached robin size, and had it flown more like a robin, that’s what I would have thought it was. I started down the beach to get a better look. Unfortunately it flew off while I was looking down to pick my steps carefully in a slippery section, so I did not see where it went. Given the size and suspicion I had seen the bird, I began to consider a kingbird as a possibility. I was able to talk to Linda (Brownie’s neighbor) who had seen the bird Sunday, and she thought it was bigger than a junco. Later I spoke again with Brownie and she said it was a little smaller than a robin, but definitely bigger than a Song Sparrow. This ruled out the flycatcher I had originally been thinking about, and I was now pretty sure I was looking for a kingbird.

I spent a couple of hours sitting on the rock retaining wall above the cobble and sand beach watching. Rain showers moved over, I noticed humpback whales in the distance to the north and some juncos that were moving through the yards. Thankfully I had come prepared with rain coat and pants, but I did finally start to feel chilled. Since the bird I had seen went in the direction of town, I decided to walk along the road that way in hopes of finding it. I figured at the very least I would get a chance to warm up a bit.

Walking along the margin of Halibut Point Road, it was only a couple of blocks before I noticed the bird on the wire right over the road at the start of the 3300 block. I immediately knew it was a kingbird, but was not sure what kind, as they’re a group I’m not familiar with. I only observed the bird for 2-3 minutes total before it flew up and over the hill to where I could not see it. In this time I managed to take a some photos and get the word out to some other local birders. Unfortunately, none of the several folks who came out to look were able to see it, though I suspect it was still somewhere in the general neighborhood.

Once home, I was able to take a closer look at the photos, and as best I could tell, it was a Tropical or Couch’s Kingbird, with much more yellow on the front than expected for a Western Kingbird. Apparently the best way to differentiate Tropical and Couch’s is by their calls (I did not hear any in my brief encounter), but the pattern of vagrancy would strongly suggest Tropical Kingbird. I fired off an email with a couple of photos to Steve Heinl and he confirmed it was a Tropical/Couch’s type Kingbird.

There a few prior October records of this species from Ketchikan, and at least a couple of them stayed for a week or so (per Steve Heinl), so hopefully this one will stick around long enough for more folks to see it. 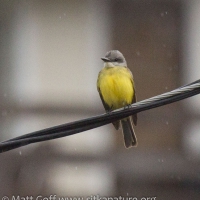 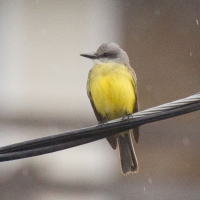 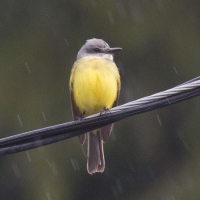 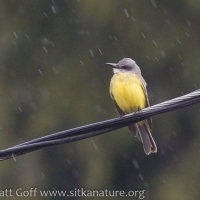 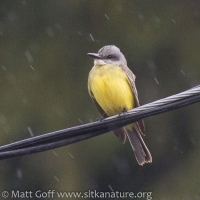 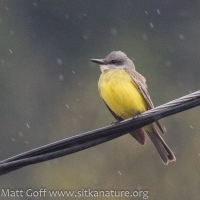 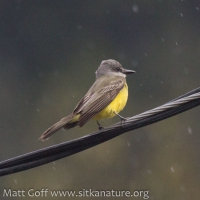 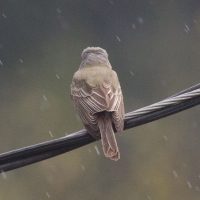 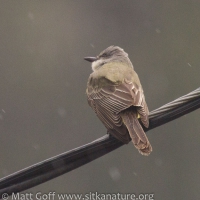