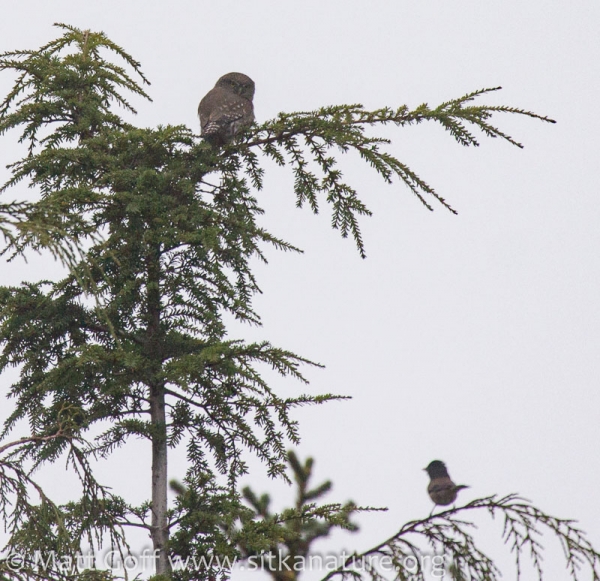 I was busy this morning and was not able to get out and look for the kingbird. However, Lucy P. let me know she had found it around 9:30 this morning in the same neighborhood where it had been before. It flew off before the next person got out there to look, but just before noon it was spotted again by Kitty L. shortly before the south parking lot of Halibut Point Rec. It remained at that spot sallying out and back to the wires for about an hour, and during that time many folks were able to come out and see the bird.

I was able to get out there a little after noon. There was a small side street that went up behind where the wires were, and I hoped to be able to get a recording of it vocalizing (which it seemed to be doing from time to time) with less of the traffic noise from the main road. Upon walking up the road, I could not see the kingbird on the wires where I expected it, so I thought I needed to go further along.

As I rounded the a bend in the road, I noticed a relatively small dark looking bird gliding across in front of me. It didn’t really seem like a starling, but that was the only thing that really came to mind at the time. I was more focused on trying to figure out how to get to where I could see the kingbird, so I didn’t give it much consideration.

Several of the dwellings along this particular road are trailers which are relatively close together, and beside a couple of them were folks in running cars getting ready to leave. I tend to feel a little awkward wandering around neighborhoods looking through binoculars or big cameras when there are residents around, so I tried to play it cool until the cars drove off.

While I was waiting, I started to become aware of delicate but insistent sounding little sounds with the rhythm of popping corn. They seemed to be coming from behind one of the trailers, and with the engine of a car running nearby, I had a little trouble deciding what I was hearing. I thought it might be juncos alarming, but I could not see any juncos, and the would-be chip notes were so fast and numerous, that I began to doubt. I considered whether there might be a drain pipe with water dipping onto a pan, but that did not seem right either.

Once the last car drove off, I was able to more clearly hear that it definitely sounded like juncos, but I still could not see any. Their alarm chips are almost polite. Never loud, they can still convey intensity, which these were. By this time a Song Sparrow was calling closer to me, but it could have just as easily been calling because of me rather than in response to them, I am not sure.

Download Audio of Alarming Juncos (and Song Sparrow)
Recording of the alarming juncos – the most obvious loud calls are from the Song Sparrow. It did not seem especially concerned, but if you listen into the background a little bit, all of the rapid little chip/clicks are very insistent juncos alarming. Careful listeners may also notice geese calling in the distance (a flock was starting to fly over as I made this recording).

When a Northern Pygmy-Owl suddenly flew up from inside the trees and perched on a branch out in the open, several things clicked for me. The bird I had seen as I walked up was the owl. It had flown deep into the thicket of branches where I could not see it. The neighborhood juncos knew what was up, and were raising the alarm while keeping the owl surrounded. The juncos were also all obscured by the branches. When the owl came out into the open, some of the juncos followed (at a safe distnace).

I was interested to see that, unlike when my kids and I had previously found a Western Screech Owl due to bird alarms (where the alarming birds all seemed to be in kind of an umbrella above the owl), some of the alarming juncos seemed to be below the owl (though still keeping their distance).

After waiting for a couple of others to arrive (they had never seen a pygmy-owl – so fortunately the owl stuck around for a little bit), I walked back down to see if I could figure out where to best observe the kingbird. It turned out where I had originally thought I would be able to see the bird was a good spot, and it was now back perched on the wires there. I was able to take some pictures against the bright overcast skies, and I also got a couple of recordings of its calls to confirm it is a Tropical Kingbird.

There are two calls on the recording – I cut out some of the time between them, so they are closer together in the recording than the bird made them. 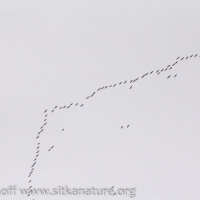 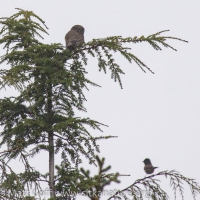 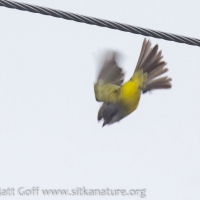 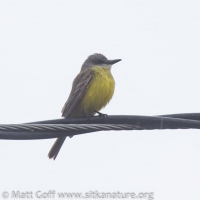 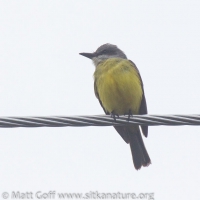 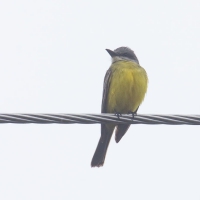 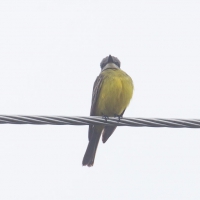