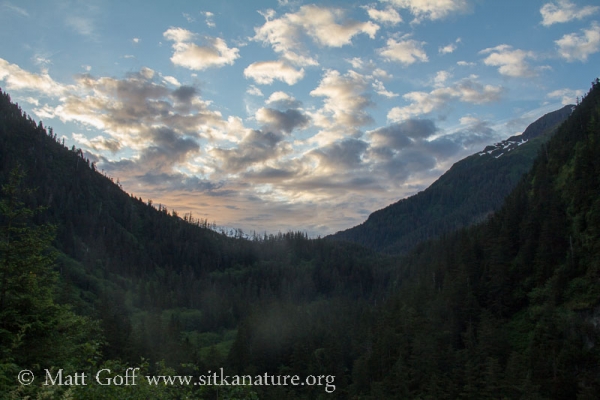 My alarm went off at 2am. It was still dark out (or at least what passes for dark here this time of year), and I needed to be up and ready to go by 2:30. Fortunately, if I actually get up and get going (normally I just roll over and go back to sleep), I’m not really a slow starter and I usually feel fine once I’m moving around. Today’s motivation for the early rise-time was prompted by the need to do this year’s Breeding Bird Survey. I picked up this route a couple of years ago, and this was to be my third go of it. Scott Harris had offered to help out, and we agreed to meet at 2:30 in order to have enough time to get out to the route start at Medvejie Hatchery in time to make our 3:29am start time. The breeding bird survey is supposed to take place between 1 June and 8 July with a start a half an hour before sunrise. However, perhaps for the sake of simplicity, the route is assigned a start time, which in this case is the aforementioned 3:29am. Although in Sitka you pretty much can’t the moments of sunrise due to mountains, the actual sunrise time was 4:06am (and I couldn’t see the sun for at least an hour and a half after that). 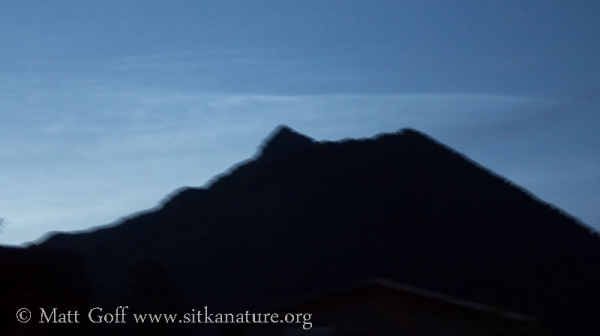 When I went outside a few minutes early to wait for Scott, I noticed the typical lighter sky in the north and a streaking meteor that appeared to be relatively close, moving south to north in front of Verstovia in the east. I also noticed clouds over Verstovia – at first I wasn’t sure if they were cirrus clouds catching early sunlight, but then I realize they must be noctilucent clouds. I walked down the street a bit to get an unobstructed view, but then heard Scott drive up, so didn’t have time to find a steady support and only got a motion-blurred photo. As we drove out the road and I caught sight of the Sisters, I could see an even more striking noctilucent cloud formation there, though unfortunately we didn’t really have time to stop. 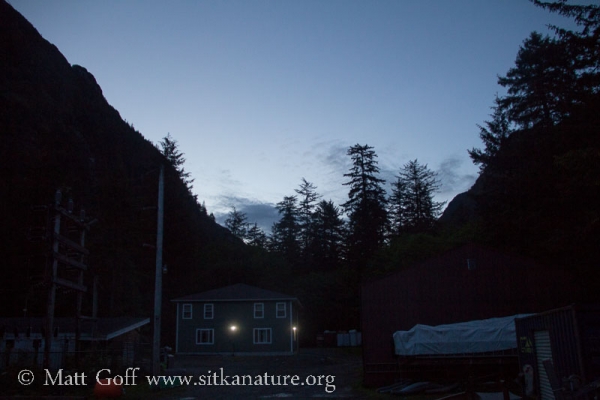 Getting to Medvejie requires checking out a gate key (the road is not maintained for public use, so it’s necessary to get permission from the city to access it for purposes of the survey). We ended up out there with some time to spare and spent a few minutes reviewing the protocol. I took a couple of pictures from our start location right at the hatchery. From this first point through 49 more spaced approximately .5 miles apart, I would need to spend three minutes at each location listening and watching to record all the birds I could observer. Astute readers who do the math may realize that adds up to more miles of road then you can really drive in Sitka. In order to squeeze in enough stops, there are some side trips that need to be made, including Blue Lake road and over to Japonski Island. Even so, the last stop requires waling about .3 miles out the ATV trail at Starrigavan. 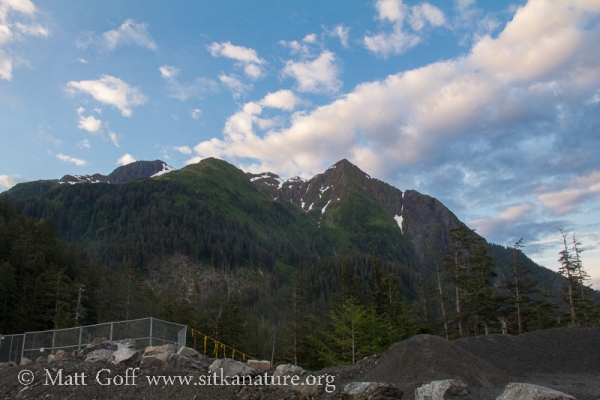 The early stops are all along Green Lake road. With daylight only gradually gaining strength, much of this time was spent listening into the bushes and forest as the dim light and heavy vegetation made spotting birds difficult. By the time we headed up Blue Lake road there was definitely much more light in the sky. Clouds were showing up as white and although Bear Mountain wasn’t yet bathed in direct sunlight, it was definitely getting brighter up there.

Although by this time I had already been up for nearly 4 hours, we were still only 1/3 of the way through the survey. As we headed into the busier part of town and more active time of day, we started seeing more traffic (which we’re also supposed to track during the 3 minute counts). The first point in partial sunlight was along Sawmill Creek Road just out from the Mormon Church, but the first point where I could truly stand in full sunlight was not until about a half an hour later at Indian River road. I tried to soak up and enjoy the warmth and light as best I could while watching and listening for whatever birds were in the vicinity.

After the Indian River road stop, comes the Japonski Island spur. It starts with a point at the base of Castle Hill, then over the bridge to the Kasei-maru memorial, over to near the airport, and finishes up with a stop at the wastewater treatment plant. By this time it’s pushing past 7am, and I’m feeling groggy. Focus was a precious commodity that I was not doing well maintaining for extended periods and I unfortunately forgot to have us do the wastewater treatment plant stop. Fortunately I realized my error within a couple of stops, and we were able to go back and take care of it without too much delay.

After the Japonski Island side trip, the route goes up Lake Street, then over to Edgecumbe Drive before going down Cascade Creek Road and out Halibut Point Road to the end, a stop at Mosquito Cove is followed by the final four stops, all along Nelson Logging road (and the ATV trail). The instructions for the final point were to walk out the trail far enough to make the .5 miles from the previous stop, but nothing more specific. So this year I started the gps and we picked a reasonably well marked spot to have the point be more easily found (and hopefully consistent) during future efforts.

We finished up around 9am, and I was home by 9:30. It didn’t take long before I decided it was time for a nap. By the time a couple of hours had past, I was feeling remarkably refreshed.

Weather-wise, things really started to heat up this afternoon. The highest official temperature I saw was 74, but on my porch (south facing, but the thermometer was not in direct sun) it was showing mid-80s. It also felt pretty hot out on the turf at Moller Field when I played ultimate there for an hour. Later in the afternoon and evening, I spent time in the yard enjoying the warmth of the sun and watering the plants that I just put in this year, but didn’t go out anywhere else. 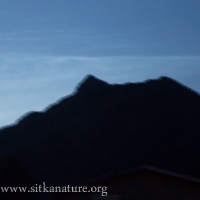 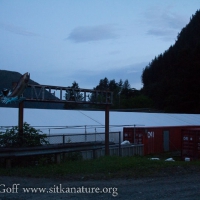 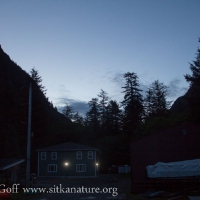 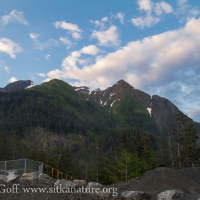 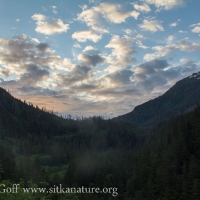