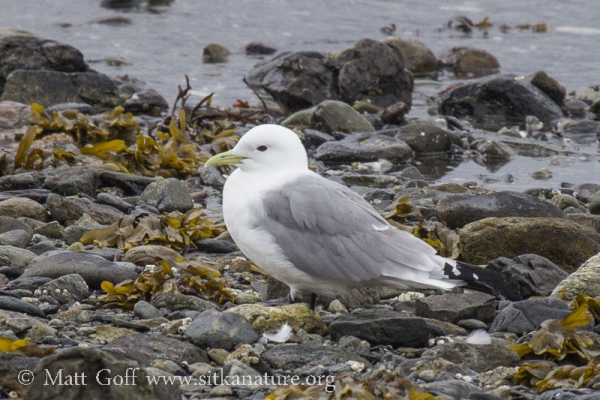 My first Black-legged Kittiwake of the year

I took a brief walk around Totem Park. On my way there I enjoyed hearing some rolling thunder, a couple of times I even saw a flash from the lightning that preceded it. Overall the day was mostly all cloudy with showers periodically adding punctuation. I didn’t notice any other lightning or thunder after the 3 or 4 I heard this morning.

Where the seawalk goes along Sage Beach (where the boardwalk starts on the way to the park) I noticed calls that sounded sort of like junco alarms (which can be kind of subtle). There were two birds trading chips, and it didn’t take me long to find one. It was a Song Sparrow. I recorded it for a while, as it wasn’t a call I had associated with Song Sparrows previously. Perhaps I’ll write up a separate post with the recordings.

During my time at the park I enjoyed a brief conversation with a visiting birder-type from Delta Junction. He was in town for a wedding and was getting a last bit of birding in before catching the ferry back north.

The tide was up and there were several hundred Surfbirds on the beach from the visitor center to the first little high point. There were also a few Black Turnstones and at least one Rock Sandpiper. I didn’t find any other migrating shorebirds, however.

Of course the big story of the day was the Palm Warbler Connor found this morning. A first record for Sitka, and one of only a very small number of spring records for the state.

This evening as I sat outside on the steps, I happened to look up and notice hundreds of birds (gulls, I’m pretty sure) soaring to the south. It took a moment before my brain made sense of what I was seeing, and I realized there were at least a couple of different circles of gulls. Now I’m kind of wishing I had grabbed my camera sooner, because as I watched, I saw them drifting closer to where I was, then peal off of a circle and form up into another one not far away. In the end, I came to believe these birds were giving form to swirling updrafts associated with a squall that was moving over. It was pretty amazing to watch while it lasted, almost visual poetry perhaps, but it did not last long.