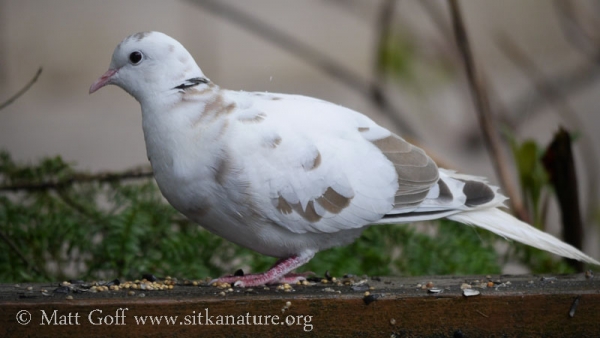 Earlier this week I got an e-mail from Liz McKenzie with some attached photos of a very white dove that had started visiting her feeding station with a Eurasian Collared-Dove. At first I thought it was a leucistic Eurasian Collared-Dove, with a majority of its feathers and exposed bodyparts lacking much pigment. However, coincidentally, earlier that same day there had been a report of a Ringed Turtle-Dove from out the road. After my initial thoughts on the nearly white dove I had seen, I started checking into what a Ringed Turtle-Dove might looked like. What I found made me reconsider – as it seems they are very similar to Eurasian Collared-Doves, though they tend to be paler. A Ringed Turtle-Dove would be an escaped or released bird, but even if only had been released, Sitka is not so big that it was implausible for the reported turtle-dove (from out the road) to have flown in to appear at Liz’s deck rail feeding station.

Further reading revealed that the turtle-doves are smaller than collared-doves, and one photo of Liz’s clearly showed that the pale dove was not smaller than the Eurasian Collared-Dove. I also noticed the bill was pink, but pictures on-line of turtle-doves showed dark bills. This suggested to me that the bird wasn’t just pale, but there was an abnormal lack of pigment. In the end, it seemed safe to conclude this interesting bird is a leucistic Eurasian Collared-Dove. 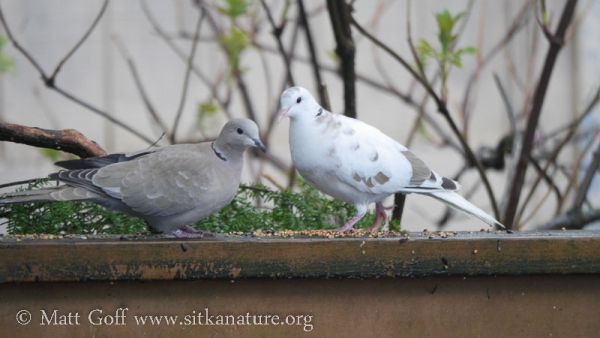 Wikipedia has a page on leucism that explains a bit more about what it is, but in a nutshell, it’s a partial lack of pigment. It’s something I’ve noticed in a few different birds over the years, so I’m not surprised when I see it, but it’s certainly not common.

Thanks to Liz for sharing her photos and giving me permission to include them in this post!