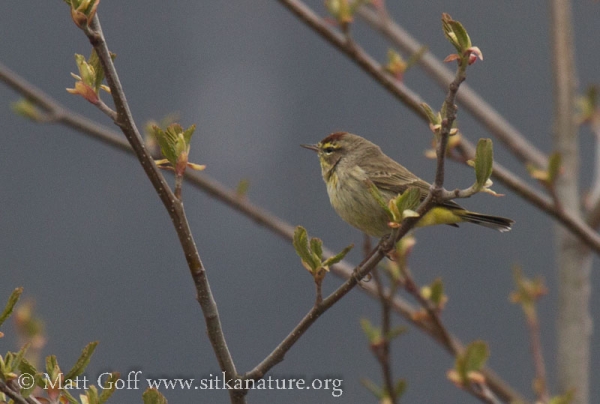 I was walking around the park this morning while my son Connor was taking care of their pet lizard at his mom’s. He called to tell me he had seen a strange warbler while over by her place and was able to get some photos of it. He described it as having a yellow throat, chestnut cap, and yellow under tail. By the time I got home a few minutes he and his sister had looked through the bird book and decided it was a Palm Wabler. I took a look at his photos and agreed that it was definitely not a typical bird for Sitka. We hopped in the car and went back to Price Street (where he had found it). I called a couple of people to let them know there was a good bird for Sitka while Connor and Rowan went to look for it. Before I was off the phone, Connor was running back to let me know Rowan had found it. We spent about an hour following it around the neighborhoods along Price and Smith Streets. It would fly between trees and brushy areas, not really seeming to hang in anyone place for very long.

This is a first record (as far as I can tell) for Sitka. In the region, it seems this species is found mostly in the fall (considered Very Rare), though there are prior spring records. Given how early it is for warblers and the mild winter, I’m wondering if this one wintered somewhere in the area/region and has started moving now that it’s on to spring.

Connor’s i-naturalist observation of the Palm Warbler with his photos. 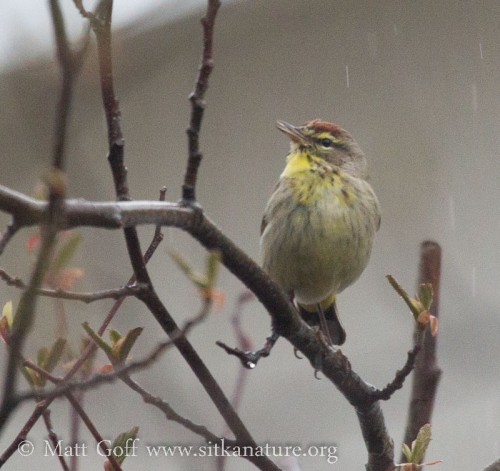