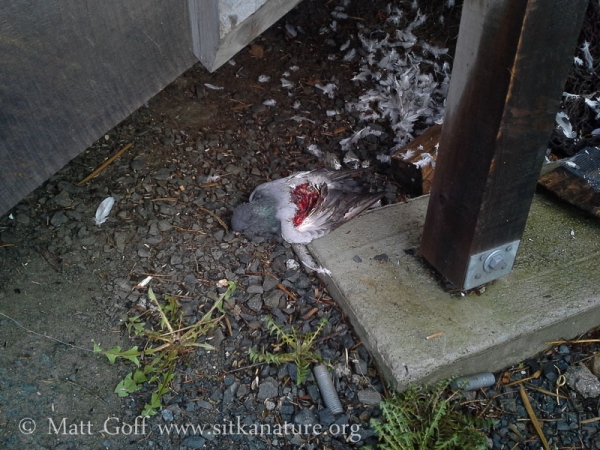 When I got back from class this morning, Connor asked me if I had seen the pigeon under the porch. I had not, and so went to look with him. Sure enough, there was a pigeon carcass laying there under the stairs. It was in such an obvious place, it seemed nearly impossible that we wouldn’t have seen it yesterday, though where it was laying was not quite in the photo I took yesterday. Connor said it would have shown up in the photo he took yesterday, but it was not there.

As you can see in the picture with this post, the pigeon is partially eaten. It’s not so much a mystery that the remains were not there yesterday, but that they were back there today. I have no idea why something would have brought them back there (or how we could have missed seeing it if it had been there all along).

On another introduced yard animal front, Connor has been wanting to (kill) trap a rat he has seen a couple of times. I don’t want him to accidentally catch a bird, so he has to take some care with where he sets it. Today he found a well-worn run towards the chicken coop and another place where there’s something of a rat latrine. He’s planning to set traps along there, so it will be interesting to see if he meets with success.

Weather today was partly cloudy and calm. For much of the day the sun was shining, and I enjoyed a 10 minute sit on the deck with the sun in my face. It felt novel (and nice) to have my eyes closed and still feel like the sun was almost too bright.