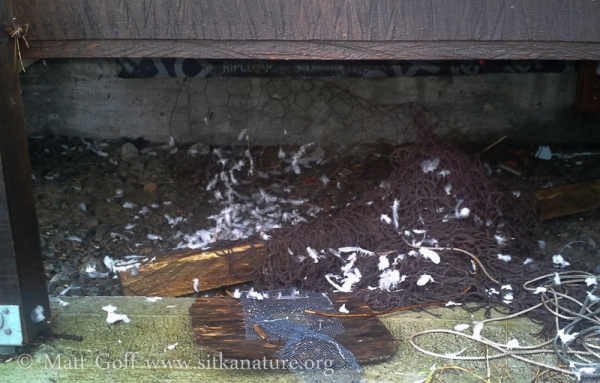 When I got home from class this afternoon, Connor excitedly relayed that he had just scared a Sharp-shinned Hawk from under the porch. He seen pigeon feathers outside and wanted to check them out, so he stepped outside on to the south porch and was surprised when the hawk flew out from right under him. By the time I arrived a few minutes later, things had settled down a bit, but the hawk was still flying around our part of the neighborhood. I even saw it do a flyover of the house after I went out to start my sit for the day.

It appeared the hawk had probably first caught the pigeon over by the brush pile, then carried it over to consume under the porch. There were quite a few feathers left, but no body when I looked. I’m not sure where the hawk might have carried it off to, whether it did so when it was initially startled by Connor, or whether it came back for it. Connor said he thought he saw the pigeon under there when he first looked, but when he looked later, he didn’t see it. I suppose it’s possible the pigeon wasn’t actually dead and was able to fly away, though I might have expected it to be stunned for a while. Had it the pigeon been carried away by the hawk, I would have thought the hawk wouldn’t have continued flying around the house for so long.

With the hawk activity immediately preceding, I was a little surprised to see the juncos in the yard shortly after I started sitting. At first they were just in the salmonberry thicket along the fence, but it didn’t take long until I saw more flying in from the east side of the house. A few sat perched in the spruce tree (sentinel?) watching before they finally ventured more into the open and started feeding around the brush pile and the feeder Connor built.

Soggy weather continued today. It wasn’t quite as wet as yesterday, but I got pretty wet (or my rain gear did) on a walk through the park this morning. The rain contined through much of the day, but the clouds finally broke a bit this early this evening as the sun was setting. Later I was able to see the moon and stars.

Today was the first time I’ve noticed a blueberry blooming near the Sitka Counseling housing.