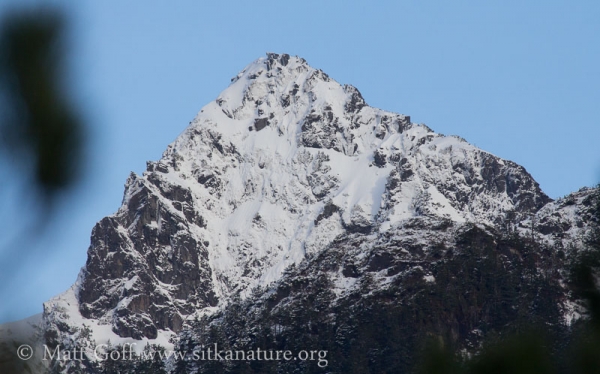 It was a bit frosty this morning as I got ready to head down to the radio station to record a conversation with last night’s speaker. I’m not sure when I will use it for a show, but I wanted to take advantage of the opportunity to visit, since he was in town. By the time we were done, temperatures had warmed up sufficiently, that there was little, if any, frost even in the shade. I wanted to get a picture documented the snow level (down to around 2400 feet, one of the few times it’s been that low this year), but didn’t end up having anything catch my eye, so just grabbed the shot of the Arrowhead Peak of Verstovia from my house late this afternoon.

This afternoon I spent some time enjoying the sun below the bridge – I had contemplated trying out my kayak for the first time in a few years, and the water was looking quite nice, but a sore neck/back was enough of a discouragement, that I decided to remain land-bound. I took a walk along the old airport road and around Alice Island with a friend before heading back home.

It was a little before 4pm when I settled down for my sit spot time. When I had walked downtown shortly after noon, I noticed it seemed pretty quiet around my house (unlike the past couple of days), and it was Etolin street before I really noticed much in the way of small song bird activity. While I was sitting, there was the same sort of quiet. Unlike the past couple of days I heard little or no activity from the east side of the house, and what birds were in the south yard (where I could see) stayed back under the branches of the spruce and in the salmonberry thicket. I heard a little bit of singing from a junco some distance to the west, but it was definitely much quieter around my house than I had come to expect over the past week or so that I’ve been sitting. It seems plausible (perhaps even likely) that this has something to do with the Sharp-shinned Hawk that Connor saw yesterday. After sitting for 20 minutes, I went back inside, and while I was upstairs I did finally notice some juncos moving through my yard towards the northeast, as they regularly do shortly before sunset during the winter.